nothing new to report

A rather dull few days as regards wargaming. I have been painting figures but alas for other people, not myself. I have an eclectic mix on the table at present demanding quite a range of painting styles. Front Rank French Line infantry, almost ready to march off to 1809 Spain. Some Seven Years units; French from Front Rank and Austrian from Spencer Smith. (Not destined for the same customer fortunately). Even some dashing hussars from Peter Gilder en route for the Red Sea and service against the Fuzzies. To say nothing of boxes of vintage 20mm from Hinton Hunt, minifig and Les Higgins. But nothing for myself and nothing new to write about as a result. Indeed since, as you might guess, orders are somewhat backed up I cannot envisage much progress with my own figures for a month or two.

The weekend of snow and sleet gave me a chance to finally sort out my library of military books. They were unpacked when we moved house four years ago but have sat just as they came out of the boxes ever since. So I have been agonising; should Fuller's British Light Infantry of the 18C be with Duffy's wonderful volumes or should it go with David Gates light Infantry work and the Napoleonic tactics shelf?
Putting all the Indian army and campaign books together made sense but should I end it at 1914 or continue later indeed should the Burma campaign be included there or with the WW2 books?

Since nobody could possibly care less apart from myself all the dilemmas were resolved with a minimum of tantrums and bad language. How could well under a thousand books take up so much space and effort? 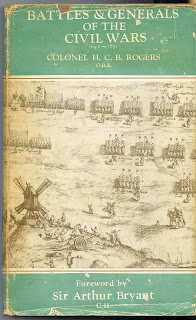 Looking through the old volume made me think back to the first few I read in my early teens. In those days the public library seemed to have much more interesting books and the military history books opened the door on to life long fascination. they also provided a welcome alternative to the corn laws and various education acts. To say nothing of the 'Welsh Renaissance', which seems in memory to have been nothing more than a long list of translations of the Bible.

So just to have something of interest, here are the volumes that set me going.
First up: Battles and Generals of the English Civil War. HCB Rogers. Fantastic stuff he worked out frontages and formations, all the stuff that nobody else bothered with.
In fact I have accepted the line that this is outdated and a nostalgic curiosity for far too long. I lent it to a friend doing a PHD on the months after Edgehill and she found it the most useful single volume she used. It is still a really good book on the war by any standards and better than *******'s latest military history. 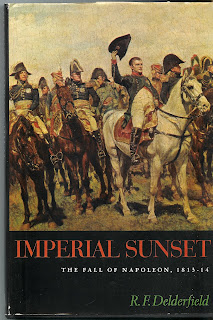 Imperial Sunset by RF Delderfield. OK it will never be a substitute for Nafzigers three volume orders of battle but wow does it grab your attention, history as story telling. Twilight of the Gods or what? Not post Marxist social history I grant you, but how many school children have had their interests changed for ever by reading a list of workhouse bills?

Finally one that I had on permanent loan for many months, it legitimised collecting toys, and as result I acquired many Britains plastic figures. I still love Garratt's books, he is opinionated, waspish and snobby. But also honest rigorous and with an incredible breadth of knowledge and enthusiasm for the subject. Modern designers and painters could benefit from reading his views on animation and painting. How much better the hobby would be if we had just one critic of his stature active today. 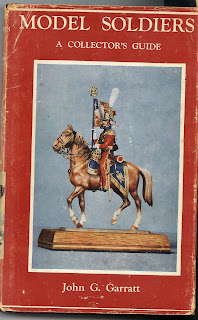 By the way these are my own copies legitimately paid for, not the originals still on loan from the library.
Posted by johnpreece at 13:03 9 comments: