On Holiday until 11th February

When the legend becomes fact print the legend: Bavarian Blue.

It has always struck me as a bit odd that people who are very knowledgeable about the uniforms of their period will admit that of course Bavarian Blue in the Seven Years War/ Napoleonic Wars/ Franco Prussian War was much darker during that particular period. Yet somehow the implication is that this was something of a temporary departure from the usual light blue that they wore through the rest of history.

Last year I was commissioned to paint the Spencer Smith 30mm Bavarians for their 1870 range. Wanting to get it right I started looking at some references which provided a surprisingly wide range of hues. 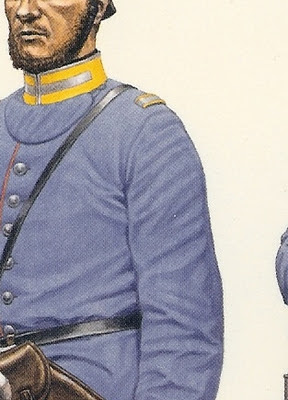 Inevitably the search started with the Osprey volume German Armies 1870-71 vol2, and very good it was too. I have cropped the picture above as I want to use the image for the purpose of fair review not just rip off the illustrators work. Nevertheless I am sure you can see that this comes in at the lighter end of blue shades and is not far removed from the classic idea that we have of traditional Kornflower blue.

Next I had the idea of looking at botanical illustrations of the Kornflower itself but this proved a dead end as they varied just as widely in the shade used.

So next up to the uniform bible itself, the works of Knotel. Surely he would be accurate especially on a German subject. 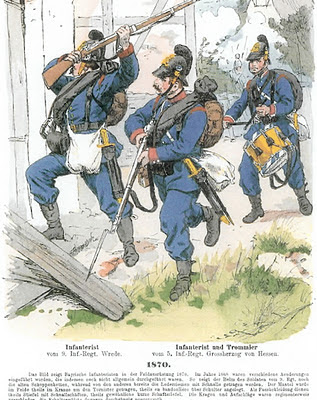 Now then, this looks pretty good, darker certainly but nevertheless light enough to clearly be a long way from Prussian Blue. I would have been quite happy with that but by that time I had started looking at the work of German war artists and it struck me that they were choosing a colour even darker. 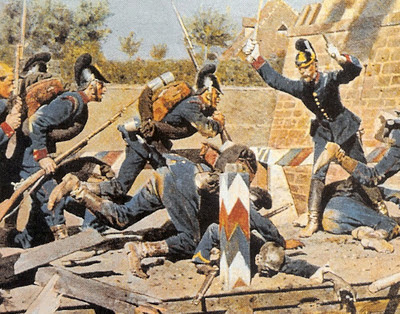 Then a bombshell; I had put out some feelers in Europe and out of the blue came this picture from the Bavarian Army museum. 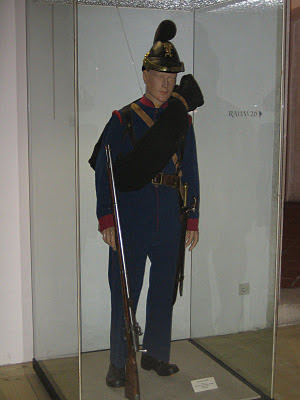 I think you will agree Mr Rochling has it pretty well depicted. And yet this nagging doubt how could Knotel have got it wrong?
Well there is this one small thought. During the victory parade at the end of the war commentators noticed that the dye on the Bavarian uniforms had faded to a dark purplish colour. What if the uniform in the case has also changed over time? And Rochlings picture was painted in 1894, what if it was based on an actual uniform but a faded one? I regard the argument as still unproven though I do personally lean toward the darkest shade of blue.

And finally after all that what did I paint my own Bavarians? 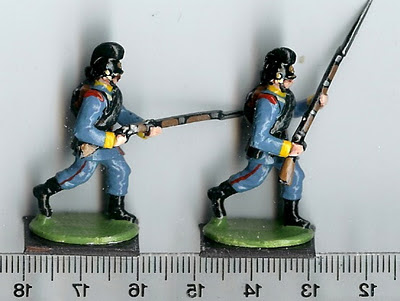 Bavarian Blue of course. Who in their right mind would pass up the chance to have such colourful figures on their table. In any case I could not face a lifetime of having to justify the colour used every time I put them on the Table.

And as John Ford said : "When the legend becomes the truth, paint the legend".

Thank you for your kind comments.

Many thanks to all of you who have taken time to comment on the return of this Blog.

Conrad asks about the chap with wine bottle, he is 20mm and comes from a set entitled armed Catholic clergy by CP models . I am not enamoured with all of CP models products, I have never felt the need for SS execution squads on my own table. But doubtless they fill a niche and they do make very fine figures. So tucked away amongst their lists are several quite characterful sets.

DaveWargamer wonders whether I should cut the 'spare leg' away from my standard bearers. An interesting idea, but I am left wondering why, having chosen a figure I admire, I would then want to start hacking bits off it? Nevertheless it is heartwarming that people are willing to help with suggestions and advice.

The picture at the top of the blog is taken from the wonderful French Magazine 'Uniformes' and shows french Cuirassiers relaxing sometime at the turn of the 19C. Not least interesting is the padded garment or Gilet they are wearing. This was worn under the Cuirass but is rarely illustrated.

And I leave you with a tantalising taster. What the hobby has lacked for some time is a blog or site dealing with 30mm figures similar to the excellent Lone S Ranger or other 20mm resources. I am awaiting exciting news on this front which I will share with you all as soon as it appears.
Posted by johnpreece at 06:06 8 comments:

To celebrate the return of this blog 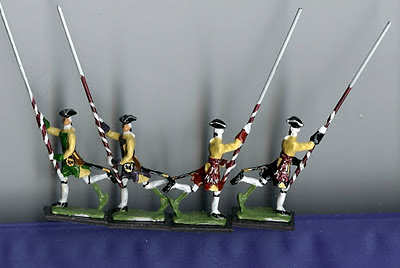 The Gentlemen of the Chorus perform the closing number from

'Holger Eriksson: The Musical'
Posted by johnpreece at 13:34 8 comments:

A Happy New Year -- the story so far.

Thank you to all of you who have taken the trouble to check this blog from time to time, and an apology for my tardiness. Nevertheless I have returned.

It is likely to be a staccato start as I am taking a three week holiday at the end of the month in order to celebrate my 60th birthday. I also anticipate changing my computer and broadband provider. Yet in the face of such overwhelming clamour from my readers what else could I do?

My first task as been to struggle with the blog controls and remove all of the streamlining and visual chrome designed to make the blog eye catching and happening. It took some effort but I am now proud to observe that it has all the style of a 1950s copy of the Times and is just as reader friendly.

It has been an eventful few months since I last posted. Classic Wargaming has gone, Battlegames has gone and come back again and some stuff has happened to countries around the Mediterranean. 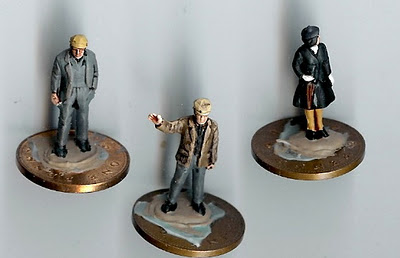 I have to say that what I have been painting this month has hardly been exciting. 20mm civilian figures to be exact, I need a couple of hundred for my Spanish Civil War games this year. I had about 40 metal figures from various manufacturers but the gap is being filled up with the old Airfix Platform Figures and Railway Workers sets now marketed by Dapol. Apart from the shock of finding that a two bob kit is now £6.00, I have been pleasantly surprised by the quality of these forty year old little figures. I strongly suspect that they were sculpted by Charles Stadden

So finally, a very happy New Year to you all. Celebrate well and play it safe, just like the chap above.
Posted by johnpreece at 12:21 11 comments: