Its been a long time coming

That's both this post and it's subject. But first off a thank you to all those who responded to my rather lazy invitation to write this blog for me. As always some really thought provoking comments that I will return to in time. 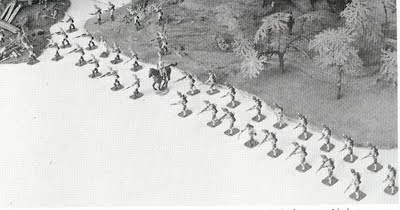 I was quietly sticking bits of lorry together when a lot came up on ebay. Stadden Pavlovski Guard Grenadiers 33 figures! Like all of you when I first bought Charge! for the very expensive sum of 3 Guineas, I drooled over the pictures and loved the light infantry. I am sure we all vowed to have a unit ourselves one day. The seller certainly had because the figures were organised exactly right for Charge. 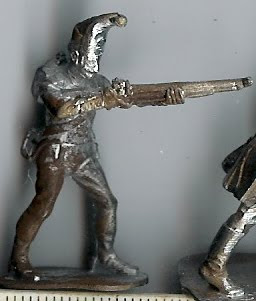 A few clicks later the figures were mine for the very low price of £6. Of course at that price I am happy with a few blemishes and a few bayonets missing and a slight amount of lead rot are tolerable. So straight off into a bleach soak to stabilise the oxidisation, this also turns it brown so that it can easily be removed with brass wire brush. At the same time I decided to remove all of the bayonets rather than replace a missing few. My excuse is that they are skirmishers and it gives them a reason to Carry the sabre moulded at their side. 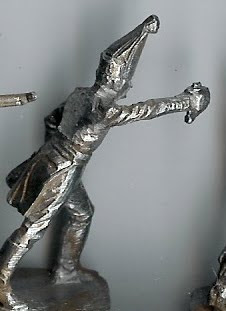 With the knife in my hand I got carried away. The officers had all Napoleonic bits such as epaulets removed and while I was at it I sawed away the packs that they were carrying. I quite understand that an officer may wish to have a warm cloak and a cold chicken and bottle of champagne to hand, but in my armies a Gentleman will have a manservant to carry such things. The sword went at the same time, a pin will be required here. 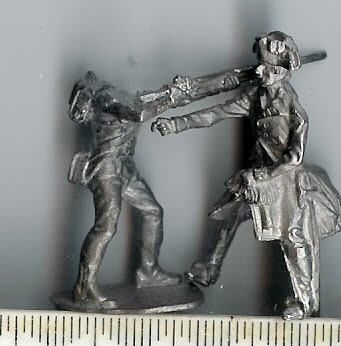 The unit has a mounted officer in the book. Interestingly Stadden never made one so a search brought out a George Washington figure that would do the job. A head donor was selected and the saw was back in action. I do wonder if I could have brought myself to hack away if these had cost £1.20 a figure rather than 20p. 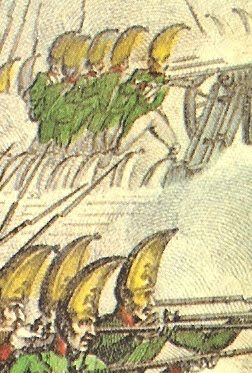 Almost finished and yet... After being involved in the 'WarGamers' refight of Sitangbad I realise that their is always a degree of tension involved when copying these classic units. Does one slavishly copy or adapt as it goes along? In this case I thought I would change the figures a little to personalise them for myself. I was unsure about the tall brass fronted mitre for Light infantry. I think I prefer the idea of a cloth mitre. I have always liked the way that it is illustrated by contemporaries as curved to the front like a 'Noddy' hat. So out with the pliers and file and I change Charles Stadden's perfect rendition of a grenadiers mitre into something much more sloppy. 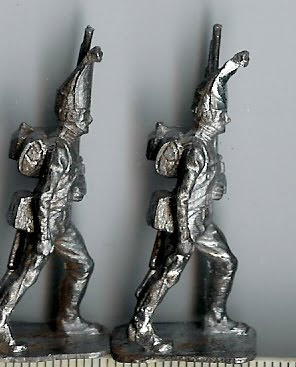 Since I am having the temerity to meddle with the masters work, I decide to add pigtails. I do like all my 18C to have powder and queues. This is a job for greenstuff. I hate Greenstuff it sticks to everything but the figure and works like a blob of chewing gum. Still I do one, perhaps tomorrow I will go and get some epoxy putty. 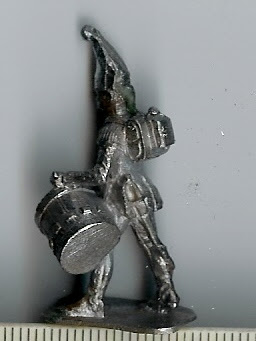 Time to start thinking about what colour to paint them. Like an archaeologist studying tomb paintings I start to pore over the illustrations to Charge. And that is where things get interesting. But I will leave that for my next post...
Posted by johnpreece at 13:28 11 comments: