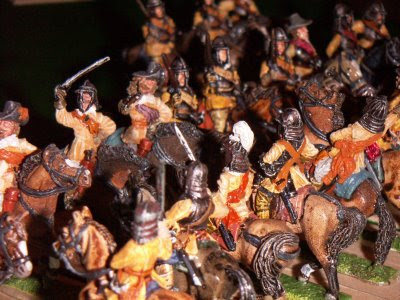 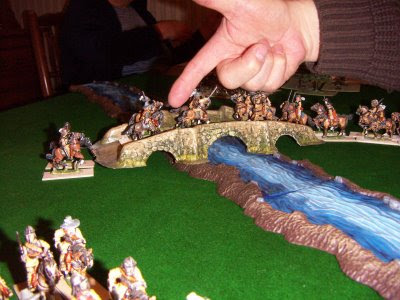 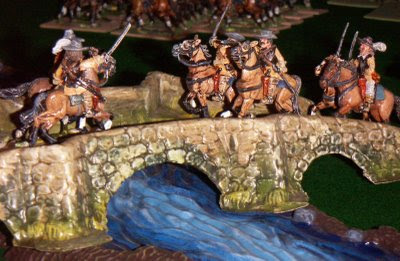 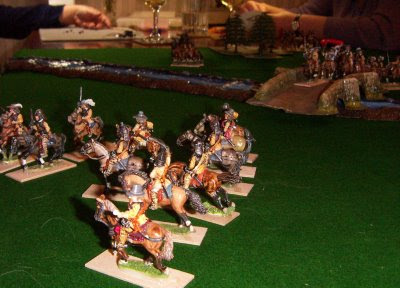 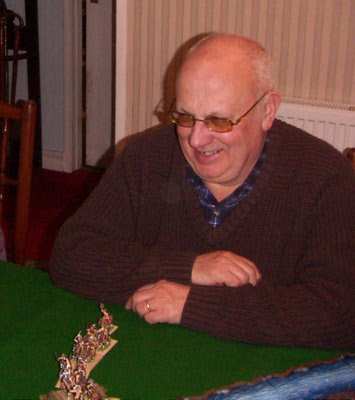 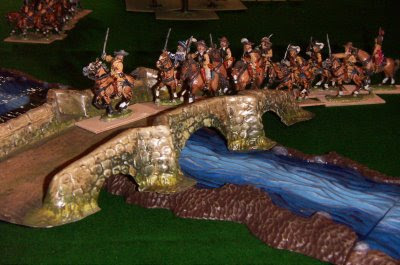 I think it was Henry Harris in one of his toy soldier books who painted an ideal picture of family life. Father at a roll top desk, no doubt with a pipe, and painting his toys. Two children are playing happily on the floor quietly absorbed in their board game. Mother sits quite contentedly in the corner knitting and watching TV. 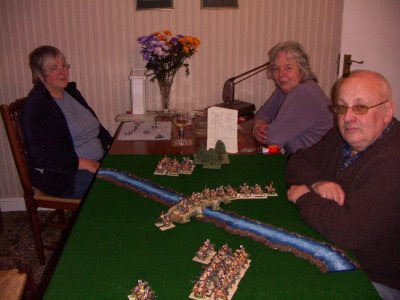 It is an image I have never felt it necessary to share with my wife, nevertheless I have often reflected on its golden ideal. Well last weekend came near to attaining that perfection. After dinner Mr Stuart Asquith and I played a small cavalry skirmish on the dining table which we shared with the two ladies who were constructing crafts of some kind (who can say they really understand such things?) Nevertheless we had a charming and civilised evening.

Yes, that's right the Asquith of Asquith towers. You can imagine my apprehension at entertaining him in my own hovel. In fact it all went off very smoothly in spite of his repeated attempts to find the door to the billiard room. Well, there was just the one sticky moment when at afternoon tea I suddenly realised that the chocolate cake didn't have those little silver balls on top. Frankly he is such a Gentleman that he pretended not to notice.

Nevertheless the expression on his face when he realised that I wargamed in an OUTHOUSE! reminded me once more of the extraordinary resemblance between himself and the late leader of the Charge of the Light brigade. A family resemblance? Ah my lips are sealed, I have said too much already. 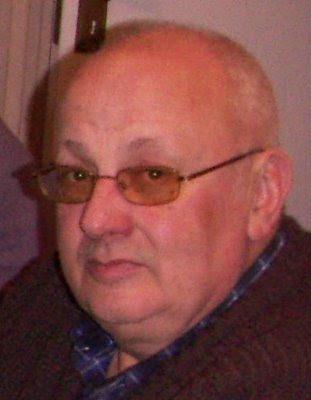 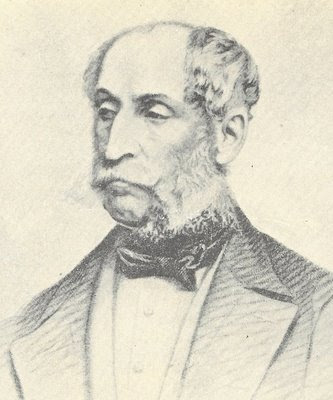 I have been busy the last couple of weeks painting for other people, so it will be a little while before I have anything from my own projects on which I can write. I am reluctant to leave another long gap in my blog so I thought that I would make a series of posts over the next few weeks that reflect the varied and different threads that make our hobby so fascinating. 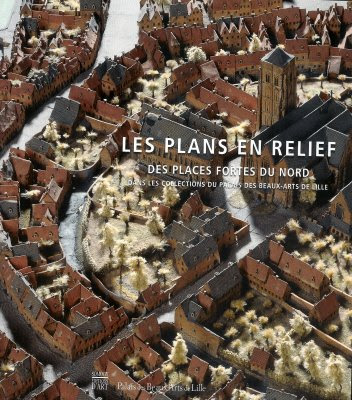 A couple of years ago Mr Henry Hyde the noted wargames editor and raconteur, returned from a holiday in Lille enthused not only by the cooking but by a strange museum exhibit he had stumbled across. Deep in the bowels of the Palais des Beaux Arts de Lille, were a series of the most incredible models of the towns fortified by the great Vauban. The only disappointment was that his photos had not coped with the poor lighting and museum restrictions.

Then this winter my sister decided to go to Lille for some kind of Shopping Fest, strict instructions led her to the Museum basement where she was able to achieve the rare feat of leaving a French attendant lost for words by brushing off his patronising attempts to redirect her back to the girlie impressionists by sternly decrying 'I have come to study the work of the great Vauban' 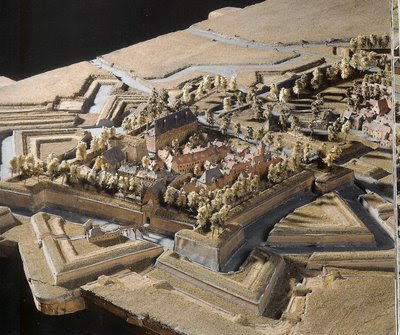 The best bit was she was able to get a superbly illustrated catalogue. Most of the models were constructed for Louis XIV and renovated in the late 18C. As the pictures show they are mainly in remarkable condition. 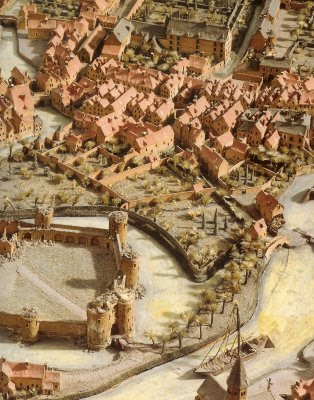 I must say that the overall effect reminds me of the buildings, created by the late Charles Grant, that appear in The Wargame. Not over detailed but creating an effect through consistent simplicity. They are a wonderful source of inspiration for some 18C siege games and one day perhaps I shall get the electric jig saw and finally put together something worth playing over. In the meantime I have the most delightful book to browse and dream the afternoon away.

If anyone else wants a copy, the museum website is not very helpful. The best I can do is this.

I hope your French is better than mine.
Posted by johnpreece at 13:20 7 comments:

I honestly don't think a photo would help here, but if you are missing one please think of a coil of 20mm rubber magnetic tape about the size of studio reel to reel recorder.

I have decided to tackle basing my Eighteenth Century figures for Charge and my English Civil War collection. All figures are 25 or 30mm and will be individually based. However I cannot face the time involved to move them around the table one at a time. So I will be using movement trays.

The figures will have a strip of magnetic tape glued to the bottom of a 1.5mm plywood rectangular base. So the bases will have square edges and butt against one another. Definitely not circular washers squirming about on the base. Infantry will probably be 20mm by 15mm and cavalry 20m by 50mm. The extra deep cavalry bases are so the tails do not knock up against the next row in storage.

I would welcome any advice from people who already have experience of this system. How thick does the base need to be in order to get a decent grip when picking it up? Is a lip around the tray necessary? What are the biggest trays that anyone has seen? Do the figures lie flat against each other or do the bases slip around or ruck up when the base is moved?

Frankly any information on the best way to use this system would be very welcome. I will keep a record of what I do and share the results on this blog. I have already got a lot from seeing this system in use in the photos on .