A Shiny New Year to you all 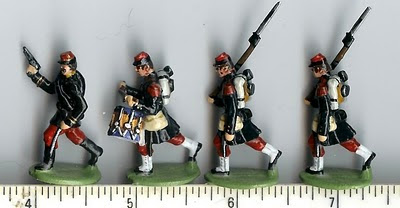 And off the painting table march a unit of well glossed 30mm French infantry from Spencer Smith's excellent Franco Prussian War range. And they keep on marching straight to the storage box, because 2011 has officially been designated Year of the Tricorne here at Martial Villas.

But more of that anon, let me rush straight into one of the questions that will be preoccupying us over the next year or so: Are there any rules which govern the creation of fictitious uniforms?

I know at least one gamer who delights in the creation of violent juxtaposition of colours and takes pleasure in his units looking like a clown convention. But alas not for me, my military milliners agonise long hours over what year light infantry units adopted black belting or when the sword began to be worn under rather than over the coat. And in truth it matters even more to a fictitious country for as Bob Dylan reminds us 'to live outside the law you must be honest'.

So recently when I began to think about a 60 man unit of Highlanders I was drawn to the idea of creating my own regiment. I had the castings from Garrison. These were a metal casting of Barry Minot's 30mm plastic AWI highlander. Originally designed for Spencer Smiths Connoisseur range back in the 70's they are rather nice little chaps that will comfortably fit from the end of the SYW to 1800 at a pinch. In order to boost that flexibility I decided that mine would be one of the numerous short lived units raised from the highlands that never quite got permanently established established on the army list. Montgomery's, Frazer, Keith, McKenzie, Aberdeen all came and went. But mine would be Grant's in memory of a wargamer I once shared a flat with for six months without ever understanding a single word he said. 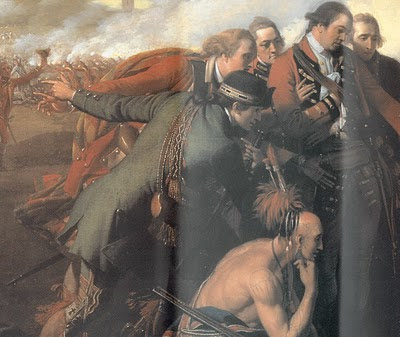 So Grants it is and the Colonel will be the Mcnab of McNab. But what tartan would they wear? In search of inspiration I looked at the famous 'death of General Wolfe' specifically the group of onlookers. Just the mixed bunch you could see any day slowing down opposite a motorway smash. But look at the highland officer at the back - that's not a government tartan! I spare you the research involved but eventually I was able to try it out as a sandy base with dark green overstripe and quite a lot of orange. It would have been wonderful in 90mm but take my word for it, it looked awful in 30mm. 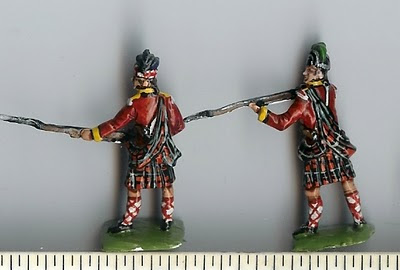 So the final result used an orange base and much brighter contrast. 60 figures took quite some time but painting is finished now and I am fairly pleased with the result. Overall a lot more work than just copying a plate but it is my own creation and I am happy that it could easily have actually been worn without the rest of the army throwing rocks! 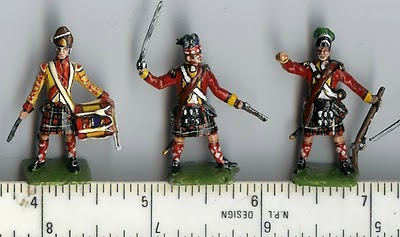 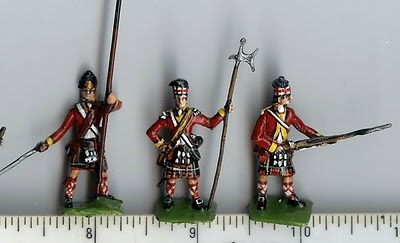