I am reliably informed by my newspaper that we have just exited the decade of the 'celebrity'. I confess to feeling a little left out; I have never felt quite the same about ballroom since dear Peter West hung up his dancing pumps. Indeed I have only recently discovered what a 'Major Ron' was.

However I must sternly admonish those of my readers who when they read of Jordan think of the Arab Legion. Gentlemen we cannot live in the past! Why wargaming was something of a trendsetter when it came to those who only required one name Don,Tony, Brigadier, then Terry, Bruce and Phil to say nothing of Jack and Duke.

So to usher in the new I present a picture quiz of the type loved by the ladies magazines. 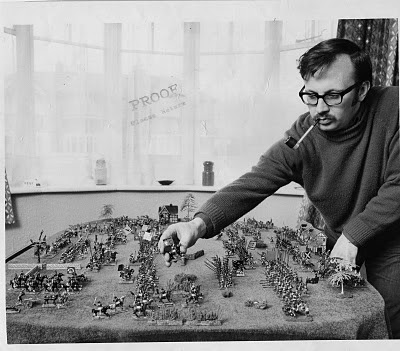 Which famous bearded wargamer is this? And for an additional five points can you name the figure range he is using.

Clue: He used these figures for a series of articles in the late Battle Magazine. And if that doesn't help you date the picture take a look at his pipe! A Bauhaus affair of ceramics and stainless steel it effortlessly emits a cloud of smoke that obscures the windows. We definitely have one of the Young Turks here! why I wouldn't be surprised if he owned those new fangled average dice.

AND THE ANSWER IS:

Yes it is indeed the young master himself, Mr Stuart Asquith. I cannot tell exactly when the picture was taken though I would like to think it was at one of his notorious 'Champagne and Wargaming' breakfasts that were such an important feature of the social calender back in the Seventies.

Some of you will have searched in vain for the Blasthof Blog this week. I am sorry to have to tell you that it has been decided to wind up the collaboration on the blog in its current form. Rather than leave it simply hanging in space it has been completely removed.

I especially regret that we have lost the contributions from Stephen, Bill and Paul, in addition to many interesting comments, I apologise particularly to those people for the deletion of their work.

A thank you to all those who visited and were kind enough to approve of what was done.