Chronicles of an Old Campaigner 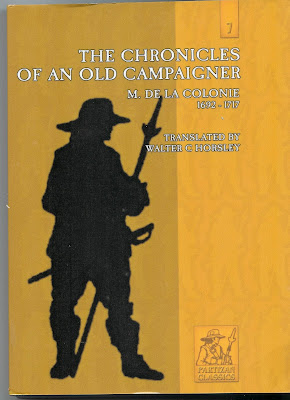 Now heres a boring picture, I can't believe that Partizan press couldn't find something a bit more lively for their Jacket illustration. But as they say don't judge a book by its cover.

I bought this for my birthday and I was absorbed within the first few pages. Duels, escaping debtors, beautiful strangers, its straight from the pages of Alexander Dumas. Indeed I did wonder whether I was reading a work of fiction, it read so interestingly. However when the narrative moves on to sieges and battles I found the description to be authentic enough to persuade me the author had been present.

The original was published 1737 and the translation by Colonel Horsley was published in 1904. It would be nice to have an up to date introduction included in modern reprints but realistically I would rather have a lot of cheap books and have to do do my own checking than settle for a few very expensive volumes with academic footnotes.

M. de la Colonie covers his serice from cadet to colonel between 1692 and 1717. He served as an engineer as a dragoon and then in the Bavarian service as an officer of Grenadiers. The wars of Louis XIV are covered and a final chapter recounts his service with Prince Eugene against the Turks.

I read this cover to cover in three days and enjoyed it enormously. It is a paperback at 478pp and available from Partizan for £25.
Posted by johnpreece at 05:51