We had lunch before making a start in the early afternoon. Steve chose the Spanish side which meant he was south on the map and had the village of Delft and the splendid defensive position of Moulder hill in his deployment area.

However Steve had to contend with two major disadvantages. he had a difficult drive of a couple of hundred miles through the heart of the midlands which took him a little while to recover. He also had no previous sight of the table or map. However he was able to use the lethargy and lack of planning to help get into his role as a Spanish General. 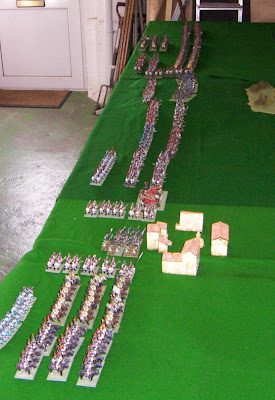 THE SPANISH DEPLOYMENT
Both Steve and I felt that the open ground to the east of Sarchen See would be Cavalry ground. He put two heavy and one light regt there. Next to them a battery of six guns deployed on the imposing Moulder hill. These were supported by four infantry units. On the west flank two cavalry regts and one infantry unit held the gap between Delft and the woods. The light infantry garrisoned Delft supported by two more units and a battery. the centre was held by a thick line of infantry of seven units.

This seemed to make a formidable defensive position with both flanks securely anchored and a stable centre commanded by imposing artillery support. Although he used his cavalry in aggressive support Steve maintained defence as the main purpose of his opening moves. 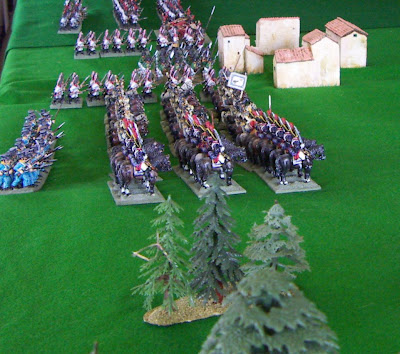 SPANISH THE WEST FLANK AND DELFT:

The previous evening I had spent some time wondering how it was possible for the player on the north (in the book the Prussians) to win. The south having such a strong position and the sides being equal. I decided that the only hope was that the defensive position might tempt the northern player to deploy his guns on the hill and sit back and wait. So reluctantly I attempted to put this theory into practice. 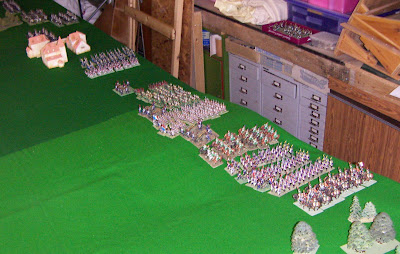 THE FRENCH DEPLOYMENT
Essentially I wanted to refuse the centre and break in both flanks. I could not put all my cavalry on the east as this would have left the attack on Delft vulnerable to counter attack, and I knew that tired or not Steve would not simply sit back and let me waltz up to the village. Aboveall I needed to keep from straying in front of that damned hill.

In the far corner of the picture can be seen three cavalry units 2 Cuirassier and a light. They have no other supporting units

This side of the village of Edelweiss are two battalions of Marines and one of middle Guard. The center is three battalions of Nassau and three of line together with three batteries. All of these units were ordered to swing diagonally toward the village of delft and attack the ground to the immediate centre of the village. The 6 guns were to gallop forward and deploy as a Grand Battery causing disruption to any attempt by the Spanish to transfer units across the center.

On the Western flank three infantry, one heavy and one light cavalry, and one gun were to advance along the line of high ground and seize the village of Delft. 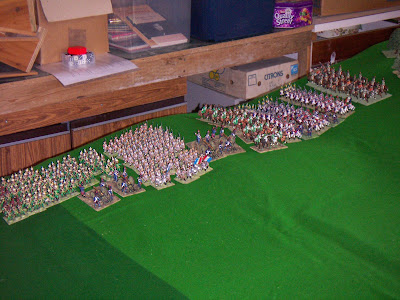 The game proceeded at a leisurely pace with a break for refreshments every two moves. and in that spirit I will postpone an account of how these well laid plans actually turned out until my next post.
Posted by johnpreece at 11:23