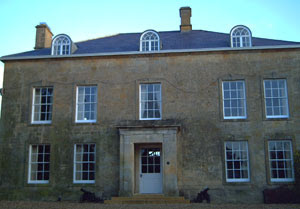 As one grows older the memories of the games and enthusiasms for rules and figures grow steadily fainter. The real riches of the hobby are found in the friendships that one makes over the years. I have been exceptionally fortunate in that despite retirement and geographical isolation the last few years have brought a host of new friends made mainly as a spin off from the Old School Wargames Group and the two show games that were held at Newark.

So I was feeling doubly blessed as the car rolled up the gravel drive at Asquith Towers last Thursday. I had no doubt of the warmth of welcome that the wife and I would recieve from that Grand Old British Wargamer, Mr Stuart Asquith. And sure enough no sooner did our car pull up than the front door was thrown open and the under butler in person rushed out to receive us.

Later I was shown around the wargames room and library and indeed the private study room. The contents of which will provide the inspiration for several more posts here. Suffice it to say for the moment that I had a valuable chance to take a close look at Peter Gilders painting style and it held a few surprises. Also the Tradition 25mm figure range were a revelation not least in that they are completely compatible with Foundry and other smaller '28mm' figures.

Friday was spent on a grand tour of the Cotswolds, and Saturday had a wargame before a splendid wargamers dinner.

The best part of such a weekend however is the charge that it gives to ones own batteries. I came away completely revitalised to resume my own wargaming activities. Which brings us back to the beginning, the most important part of wargaming is the social aspect.
Posted by johnpreece at 03:34

Happy to see you back in action here! And terribly eager to hear more of your stay with Stuart Asquith.

You are teasing us Mr Preece - i demand to know more about Gilder's painting and those very tempting Tradition figures (which i previously thought were small 25mm)! Do tell...8-)

Social aspect is often overlooked in our pursuit of 'the game' or 'historical recreation'.

I also wish to know more of your visit. Please share some of your observations.

And, of course you are right. The camaraderie of our wargaming community is our greatest asset.

John, I am driving back from Historicon as I read this (Protz is doing the driving and Frye is navigating, so I'm slacking off and surfing the net on my laptop).

I am read your posting to the guys and we all agreed that you hit the nail on the head with your observation about the social aspect of the hobby - something that we are enjoying as we drive
700 miles across the country to home.

Hi John, I agree with you about the social side. The internet's been such a great tool for the hobby.

That is an impressive house - do you have details of its year of construction? It reminds me of the large 1740s stone houses I saw in Massachusetts (aside from the top floor dormers, which are very different).

Nice to see you back John - looking forward to further posts.

Thank you all for the interest and kind comments.

Fritz,
I loved the account of your road trip. Easy Rider for the more mature gentleman. I was reminded of Bill's account of a journey to the club in a blizzard while painting figures as they went.

I can't tell you exactly. Obviously Mr Asquith would regard such inquiries as intrusive. However I had a word with his PA and I understand the bulk of the facade to be Georgian incorporating several older features. So I guess Queen Anne to 1800ish. Though I would say mid 18C as you say.
I was reminded that when they filmed Revolution the Boston scenes were set in the town square at Kings Lynn, as being the nearest thing to a prosperous late 18C American town.

I will try and get another entry to deal with tradition and PG asap.

Gents,I'm in wildest Wales as well,and if anyone could recomend a club that would welcome the dreaded Sais I'd be most grateful!.

give me a mail at

and tell me where you are and I will see if I know of anyone. There are clubs in Pembroke, Shrewsbury, Deeside, Bangor and several in south Wales to my knowledge.