The modest contentment of Stuart Asquith 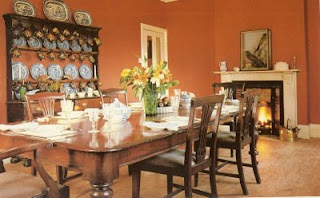 The 'scullery' at Asquith Towers


One of my favourite blogs
http://frivolousfusiliers.blogspot.com/
recently ended a post with a quotation from Horace, frankly I was impressed.

It strikes me that I learnt something in my youth that would sum up this entry very well. Something about some bod who had conquered the world staring with dissatisfaction at the vasty Afric plain or such. Alexander or maybe Cortez. Anyway it remains firmly not on the tip of my tongue so it will have to be prose once more.

Many of us are now veterans of many a wargames campaign, we have surveyed ranked trestle tables packed with figures, we have slept on the floors of village halls and Scout huts across the land. We have painted, with varying degrees of satisfaction, figures from Alberken to Zvesda. Now as we reach our more mature years how do we maintain our enthusiasm for painting even more units and armies?

Stuart Asquith, smiled and refilled my whisky tumbler as I explained my worries to him. Sinking back in his deep leather chair and surrounded by the accumulated volumes of a lifetime of military reading he explained his philosophy.

There came a point in his life when he got rid of his armies, though not figures and units that had sentimental associations, and for a time was purely a collector. Eventually he came to a realisation that he was not disillusioned with wargaming as such, merely with the way he was embracing it.
Getting suddenly to his feet he strode to the library door and called out. A few minutes later he reappeared with the butler helping him carry several oak boxes.
These were chosen at random he explained. The boxes were similar to those that would have been used to contain formal canteens of cutlery. about 2'x 11/2' they were beautifully stained and gleaned with brass fittings.

"Every time I have a new project I get a local craftsman to knock up a couple of these",he explained. "They form a limit to the project, I work out exactly what I can do within these limits and how to get the most enjoyment from it."

He lifted the lids on a few of the boxes and what treasure nestled in the green baize interiors. A box of exquisitely painted 30mm figures formed a small but perfectly represented 18C army. 54mm britains naval brigade dragged their little lead cannon across the veldt. My favourite though were two boxes that had Russian and Allied 20mm figures from the Crimean. Mini fig S range, Douglas, and Stadden, every piece a collecters item.


"At our age size isn't as important any longer." He said picking up a new bottle of Islay malt from the side table. " Look, I'll prove it to you. The butler wants to get away early tonight so rather than have him set up the billiard table for a game we will set out on the scullery table and I bet you we will have just as good a game."

( I must say that is typical of the man, that he not only knows all the staff by name, but insists on them having at least one half day off a week to visit their families.)

So after dinner that evening we made our way down to the old servants hall, where Stuart has set himself up a very comfortable breakfast room. On the table had been laid out that old classic Blasthof bridge. 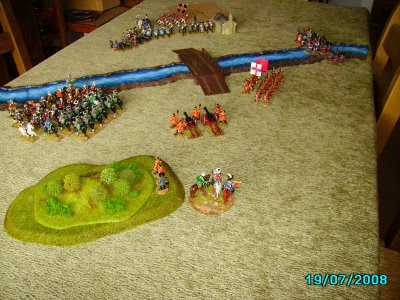 The story of that game must wait for another post however.

Readers wishing to know more of Stuarts 'game in a box' should read his full account of it in Battlegames magazine.
Posted by johnpreece at 14:29

Chuckle...
I'm most impressed by the Blasthof Bridge setup. Big Battalions make for a great spectacle, but Mr. Asquith's "box" idea has its merits, too.

I was beginning to think that this whole post was tongue-in-cheek until I got a glimpse of the wine cellar in the Blasthof Bridge photo. I am in awe…

Excellent... I hope that these posts cause Stuart to chuckle as much as they do me! :o)

Thank you also for the introduction to a new word "vasty" which I'd not come across before...

Keeping it on topic (the web is a wonderful thing)...

"Can this cockpit hold
The vasty fields of France? Or may we cram
Within this wooden O the very casques
That did affright the air at Agincourt?"

Oh, thou art a rascal and a knave, Johnny Preece! Methinks thou dost make mockery of us, thy audience, and jumble up our wits when we think of old Squire Stuart, fettled up within his mighty walls.

But then we few, we happy few, may strip our sleeves and show our scars that we did suffer with him upon that day at Partizan and say unto thee that if those images do show our Stuart's domicile, then I am indeed a toad!

This is priceless! What's next?