So, moving swiftly on!

Well apologies to all who have dropped in found no one at home, especially Black Bob.

I would love to tell you all what I have been up to this autumn but as Dr Watson might have said, the world is not yet ready to know the full story of the Mongolian mountain of light and Mr Asquith's part in averting the collapse of western capitalism.

Anyway the doctors have saved the leg and I now feel strong enough to return to one of the most contentious issues of our time:

Toy soldiers and how we paint them!!! 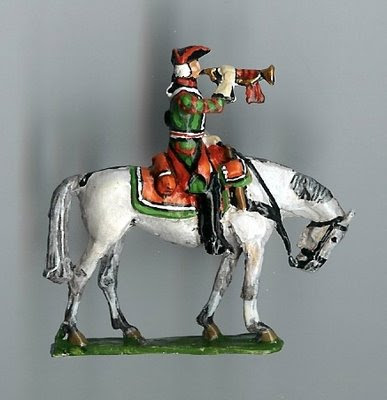 I am not a huge fan of imaginary armies but I give myself the treat of designing and painting just one unit a year for my fictional mid 18C army. The last three years have produced units which were copied from Peter Young's 'Charge'. This year I was able to start from scratch and settled on another cavalry regt. This time one of dragoons. 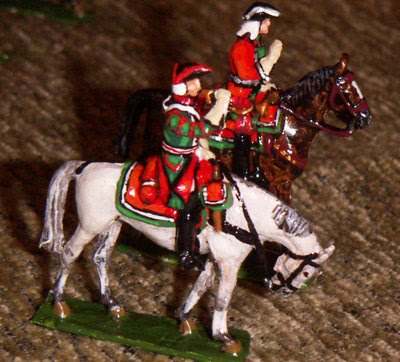 Regular readers, (if any such are left) will know of my enthusiasm for the horse models of Holger Eriksson. The range that are available is really quite wide now and can easily be ordered through Tradition or Spencer Smith miniatures. A word of warning though. The legs are very delicate, don't be tempted to trim any flash from the lower legs of the horse. Just be grateful for the extra strength and paint it as foliage. 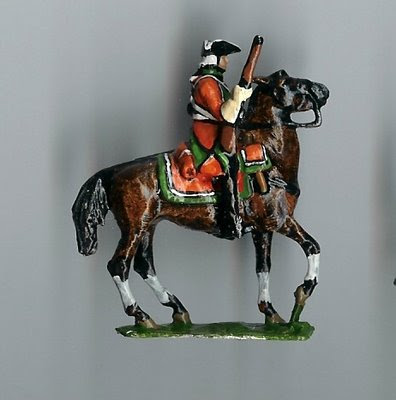 My army is loosely based in the mid 18C after an alternative thirty years war in which many states remained independent and Bohemia is a northernmost bastion of Catholicism with its independent army. One of Bohemia's oldest and proudest regts is the Winter Queen Dragons, so called because they provided the escort to the Empress Elizabeth during her campaign to consolidate her reign after the assassination of her husband.. 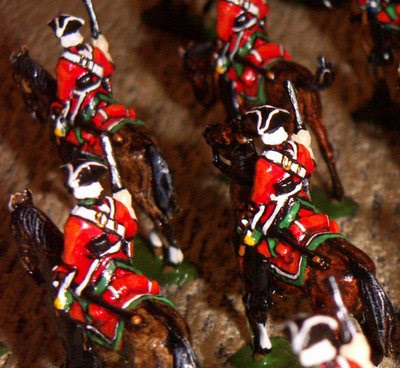 Most of the painting is self evident. However I experimented with the horses. I am always looking to cut down the time and effort involved. I prefer to use a spirit based wash rather than water for large areas as it spreads more easily and runs into the depressions without those nasty bubbles that pop later and leave undercoat showing through. This time I wanted to try and get something of the effect of using oil paint without all the hassles of putting it on and wiping it off. 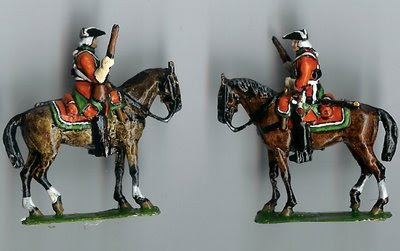 Cream and orange undercoats the same wash on top

I divided the horses into three and undercoated them with diluted washes of enamel paint in khaki, cream and bright orange. I then made a mix of about one part Vandyke brown oil paint, one part linseed oil and four parts white spirit. put in a Little bottle with a brass screw as an agitator it keeps well. Splash it all over and put aside for at least a week, maybe three. (Next time I will try quick drying linseed oil.) Overall I am pleased though the oil pigment is so strong the undercoat shows through less than I expected. Lastly I finished with several coats of gloss spray varnish to get a real porcelain glaze on the figures. 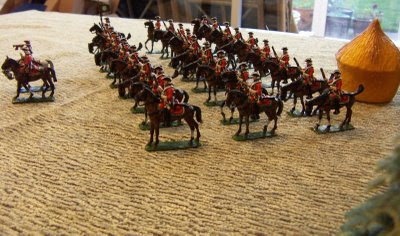 The Winterqueen Dragoons at exercise. This painting shows them manoeuvring on the harvest stubble fields south of the palace at the end of an Autumn evening. (scenery by merit, harvest field from Mrs Asquith's sewing basket.) 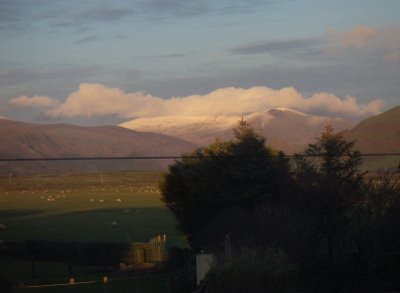 And finally, A Winters Evening... the view from the window by my computer desk, taken while writing this blog entry. I wish you all a peaceful and warm Sunday evening.
Posted by johnpreece at 06:50

Welcome back John, and a nice post... the horse with the orange undercoat ends up looking almsot like a fine Chippendale french polish.. lovely!

(one of advantage of using Google Reader is being alerted that a blog one is subscribed to has made an update, so you don't miss gems like this)
Very nice paint jobs on the minis - and cool view out your window!

I for one never lost faith that you would post again when you had something worth saying! I am also a firm believer in acrylics, but your results sure do look tempting.

That is one hellacious view from your window. How ever do you get any painting done at all with scenery like that to gaze upon, hour after hour?! It sure beats the harvested cornfields here in Indiana! Ha, ha...but on the other hand, I get a lot of painting done.

If I might add a comment to the latest edition of John's blog. His dragoons look even better 'in the flesh' as opposed to photos. So much so, that as soon as I returned home after my recent visit to see John, I immediately ordered a unit of HE dragoons from Tradition Scandinavia and painted them up in exactly the same uniform. Nice one John!

Those HE figures are very nice. I'm tempted to order three squadrons of 12 figures for my SYW armies.

I also very much like the horse with the orange undercoat.

But what I liked most was the name and story of the Winter Queen Dragoons. Great background.

Please let us see more of your other Imaginary units (and share their backgrounds as well).

Just me again. Still overwhelmed (in a great way) by your brushwork on those HE figures. They are wonderful.

Good to see you back in the saddle John.

And the figures are great.

These figures are so graceful don't you agree