This post is by way of being a thank you to all those people who have been, patiently logging on the last couple of months. Also in response to the very kind comments on the last post. So especially for Jean-Louis, here is the unit history. 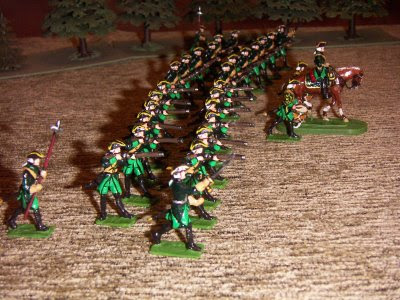 The Battalion advances in line

In the 17C the Imperial forces of Bohemia suffered a humiliating defeat at the hands of the lightly armed Hungarian Grenzer of their eastern frontier. In order to counter this the first established unit of Light Infantry was raised from the huntsmen of the extensive Tuetoburger forests of the western mountain ranges. This unit was an immediate success having fought in several campaigns during the first half of the 18C and can claim to be the oldest permanent unit of light infantry by several decades. Nevertheless it is with pride that the regiment claims Varrus AD9 as their first battle honour. 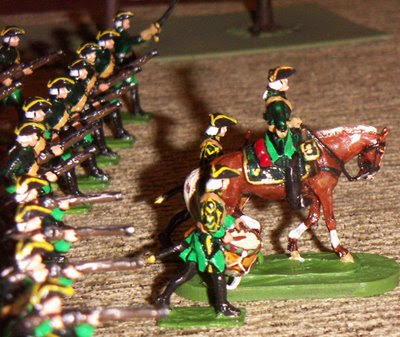 With drums beating and the Colonel at their head

The figures are of course Holger Eriksson 30mm. They have had slight conversion by cutting the musket and bayonet down to rifles. I had better give a formal link for those who want to look at the full range in detail.

I tend to order from Peter Johnstone who has always been extremely helpful getting figures at short notice for a display game. but I hear good things about Tradition as well. 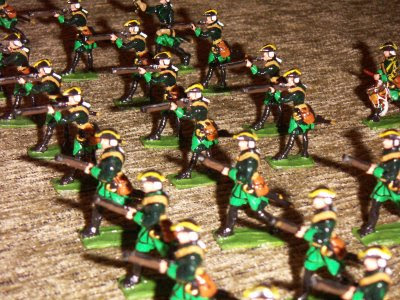 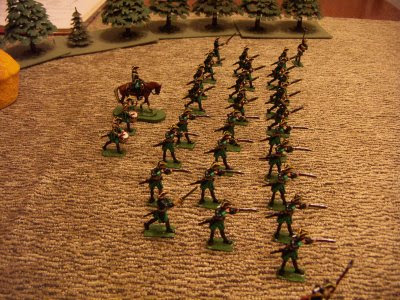 The Battalion has deployed into skirmish order. The gentle reader will note that the formations are those advocated by the theorist J Evans Mudd in his famous drill book '38 movements for light infantry by which victory must be assured.' A best seller in 18c Bohemia. 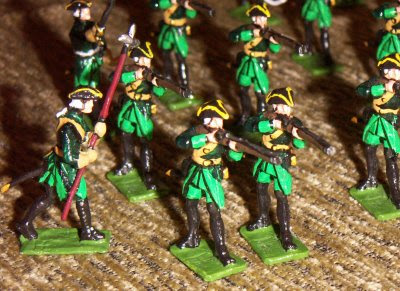 Two infantrymen forget their drill and 'bunch' within 1" of each other. The Sergeant is about to demonstrate how this can be rectified by the use of an halberd.
Finally a word on paint. 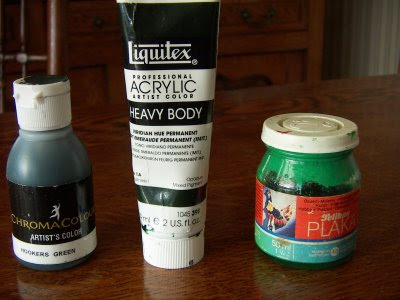 I painted the coats with Liquitex Acrylics as I only had camouflage greens in enamel and I wanted a pure colour. Although a nice shade it had problems covering and has a strange translucent quality which with a gloss varnish looks a bit like glass. So its kept now exactly for that. The small clothes were painted with a 20 year old pot of Plaka poster paint and worked fine. However this summer I have been trying a new line of paint recommended by Mr Mike Siggins. Chromacolour, which seem to be a more user friendly substitute for the Plaka having great purity of tone and strong pigments but much more easily worked with. So far I am very impressed and will hopefully describe them in more detail in a later post.
Posted by johnpreece at 05:07

Indeed a truly remarkable unit - both by the apperance skillfuly granted by who 'created' it, and by its history.

"I am not a huge fan of imaginary armies": I disagree, you betray more inclination toward imaginary units than you dare to confess, and are as gifted to write their background as to paint them."Tuetoburger Wald Jaeger, 1st battle honour: Varrus AD9" - marvelous! Don't disown that part of yourself that revels in 'the Dark Side'.

Thanks for sharing!
Best regards,
Jean-Louis

I agree with Jean-Louis, an excellent imaginary unit! The tie-in to the old Teutoburgerwald events is an inspired idea. Nice colors, too!

I've been visiting your site faithfully, waiting for something new, and then I forget to check in for a couple of days. Imagine my great surprise to see these glorious pictures of your recent project. They look terrific.

Is "Herman the German" still carried on the regimental rolls as the first CO? Ha, ha, ha!

That is one snazzy looking bunch of light infantry. Any wargamer worth his salt would be proud to deploy them on the tabletop. Keep up the good work, and keep us posted on the latest developments!

Glad to see you back, and what a visual treat! I really must get myself some more Holger Eriksson figures next year. Already lovely works of art, your skillful painting makes them even more magical.

Lovely work, sir! I'm also a fan of Holger Eriksson figures, and a number appear in my armies.

Excellent and inspiring work - your figures are beautifully painted and have encouraged me to get some H.E figs on my shopping list...
Alan
p.s the cavalry are great too!

Belated applause and bravos from me to thee John. Last weeks frenzy did not slow until my own biology sat me down rather hard the past couple of days. So today I had the pleasure to read your three new posts sans a frenzy and enjoy the sights you've kindly shown to us at liesure.

I have some HE mounted musicians and want to place them in my French or Saxon cavalry units. They might fit best in my case within the new Eureka Dutch cavalry arrived here last month. I remember HEs from the late 1970s and thought then how lovely they were. Naturally at the time as a young fellow with little free money to spend I opted for less desirable fellows who since have not seen the light of the table for oh twenty years or more.

link to mine if you can

I just spent a very enjoyable time looking through the photos. The figures/units are as close to my ideal as I think is practicable.