Peter Gilder was a great innovator in many areas of wargaming. I well remember someone fielding a late roman army after returning from the wargames holiday centre. It had a splendidly dusty and battle worn appearance which was entirely due to the simple trick of lightly dry brushing the final painted figure with white.

I noticed that a splendid blog has started celebrating the works of the master. and not before time.

The authors other blog on 19c armies is also one of my favourites. And while I am at it here is an outstanding blog on the late 17C, which does not seem as well known as it should be.

not only fascinating but 59 posts in January alone!! 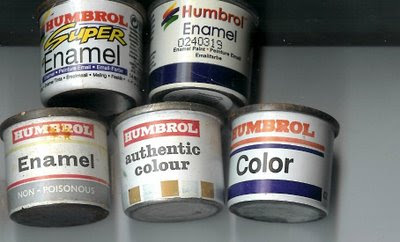 The simpler the pot the older and better the paint. Just like life really.

Dry brushing. This really depends upon the consistency of the paint for its success or failure. I have dry brushed with everything from watercolour to masonry paint but the only thing that really works on toy soldiers is enamel paint. Ideally Humbrol and from at least before the last two times that they changed the paint. I wondered if it was me being picky but I notice that old tins of Humbrol are changing hands on ebay for more than the price of new paints.

But I digress.
Posted by johnpreece at 11:47

John: blogspot allows you to make links active. Highlight the URL that you type into the text box and then click the little chain link icon. this will then walk you through the process.

I get pretty good dry brush results with acrylics. I find that it's the brush that matters more than the paint.

Thanks for the ITGM blog tip.

I was going to let you know about the links icon too.

And I'm finding the 17th century site more interesting than the Napoleonic one.

Thanks for the link.

Would you believe that I have a few tins of Humbrol (various greens and a few other colors), purchased in 1988-89, that are still serviceable? Most of those I found at a stamp and hobby shop in Trondheim, Norway during the winter of 1999-2000 are also still in occasional use here in Stollen Central though I use mostly GW acrylics these days. I nevertheless remain a huge fan of Humbrol paints, and I hope they manage to keep going.

For some strange reason i had never thought to look out for old humbrol authentics on eBay (doh!) - thanks for the tip. BTW, the last time i was at The Keep Paul had a large box of ancient, rusty humbrol tins - i knew i should have bought the lot. I believe The Keep is shut now but they still sell via eBay and mail order so it might be worth an enquiry.

I recently had cause to buy some Humbrol Enamel. First time in many years. Useless stuff! Still smelly, but the legendary covering power has gone.