Painting with Uncle Igor. part one.

I never cease to amaze myself, the speed with which I can take a perfectly sensible wargames project and by degrees turn it into something which borders on the surreal - well frankly its a gift.

I was amazed by the comments and really helpful suggestions which flooded in after the last post. (Well 15 is pretty much a flood by my standards.) So what I thought was a mild trespass into the wild woods has become a major part of the fictional nation project.

I was pleasantly surprised by how much junk, sorry wargames treasures, I had stored away against a rainy day which could become useful. Just for one there is the Zvesda log fort that I bought at Abingdon show because it was too cheap to resist and after all it would make a good US Cavalry outpost. Absolutely perfect for a frontier post on the wild edges of Moravia.

But of course first off I had to spend money on more figures. My wife would certainly utter the phrase 'throwing good money after bad', but fortunately she rarely reads this blog.

I mentioned the 'Cossack wars' range from Old Glory, they seemed to have everything I needed to set up the game I was thinking of. I don't know how I resisted a Cossack leader on his throne carried by 8 slaves, but I did. Instead I bought a bag of villagers and a very useful bag of a wagon and four pack riders. Andy Copestake helped me with the catalogue, sent two helpful emails and had my order with me in 24 hours. That is good service in my book. 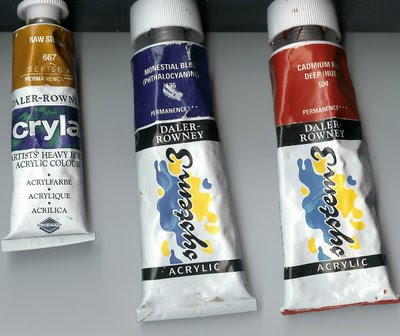 So I thought I would say something about how I painted up these particular figures. First off its important to decide just what effect is actually wanted. Frankly, these are not exquisitely sculpted works of art. They have an appeal and bags of character but they will not repay hours of detailed work in my opinion. So lots of paint slapped at them not too much worrying about mistakes and get something that will look OK from six feet and will be finished quickly.

A couple of coats of car spray white primer from the local garage at £2 a tin. Next we block in the main colours. These are big figures with a large surface area. So I do not want to use several jars of expensive high pigment model paint on them. I have always found Daler System 3 to cover without brush marks and to be very cheap it dilutes to at least double the volume. A few tubes of slightly better quality paintsfrom eg the Finity range will fill in any gaps. 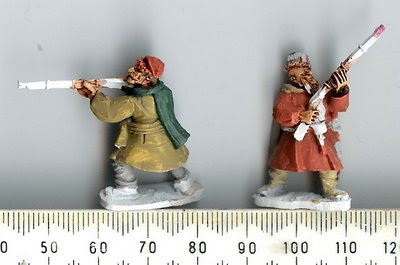 First off I mix up some pale grey, this is the base for all other colours. It takes off the garishness that will appear if artists colours are used neat. Buff Titanium can do the same with other pastel colours. Next the colour is mixed using water that has about 1:4 flow extender in it. I make up a dropper bottle full regularly for all acrylic thinning. The brush used at this stage was least a three and up to a five depending on the make.

Flesh is painted at this stage and is usually standard flesh heavily lightened with white, though these figures have a lot of yellow ochre in as well. Once the flesh is dry I wash it with a mixture of Winsor and Newtons Indian ink. One part Burnt Sienna,Nut Brown and distilled Water. 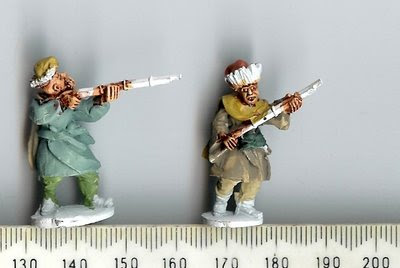 That's the end of the first stage I let everything dry thoroughly and reach for my old favourites Humbrol Enamel and spirits of turpentine.
Posted by johnpreece at 13:22

These figures certainly are NOT elegant . . . but the do have lots of character.

Indeed I suspect that they can be rather fun to paint (as long as one doesn't get too careful with them).