What are the best rules that you never use?

A quiet month so far, at least as far as wargaming and blogging. I began by having my gall bladder removed (don't worry I am not about to post any pictures). I have not done much since although this week I am starting to catch up on a little light basing. Sticking machine gun crews into tile cement, that sort of thing, nothing too strenuous.

So I thought I would pose a puzzle for my readers. We all have a bundle of rules that we never use. Now I am not asking what you don't like. That would be far too obvious and banal for the razor sharp intellects that gather here. No, what rules do you really like and admire but never, ever actually get around to using and,of course, why is that?

I can start the ball rolling with three sets. 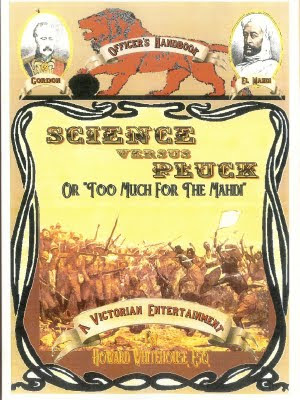 Firstly the WRG set Corps de Armee, remember the blue covered one with an introduction by David Chandler. I poured over these for months studying them and thinking they were everything we could ever need. They were hugely influential on my thinking but I never did get round to playing them and I suspect now that they may well have been unplayable.

The second set is Howard Whitehouses 'Science v Pluck or too much for the Mahdi'. I have both editions and everything about this set screams FUN! I love to read it but never seem to have had the occasion to play it. I suspect the reason is that I play few games nowadays and when I do a more traditional game seems to be demanded by the occasion. 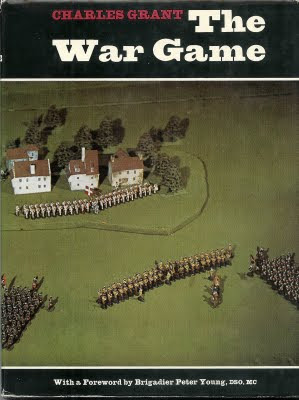 The last rule set I have chosen will no doubt cause some raised eyebrows but have to confess to having never played a game using Charles Grant's 'The Wargame'. Poured over it, loved the book but never played it. Wonderful rules but I have always used Charge by Lawford and Young. This may be because Charge was the second Wargaming book I ever bought, in 1969, but thirty years passed before I finally found a second hand copy of Charles Grant's book. As you can imagine I had become somewhat set in my ways by that time.

Well, as they say Coffee break over. Time to get back to spreading grouting on pennies, surely one of the most boring activities ever devised.
Posted by johnpreece at 13:31

I trust you are well on the way to full match fitness. As for rules...i actually have used SvP (modified for 25mm) and would do again if i ever have a table large enough. Like you I've never played The Wargame, and my first AWI games were fought using Charge! I would like to throw the second (late 1980s?) version of the WRG Second World War rules and the Plains Wars set 'Yellow Ribbon' into the ring - both seem to capture the flavour of the period through some quite clever mechanisms but neither saw any use at Castle Shiny as their purchase coincided with one of my all too frequent changes in direction. As i rarely revisit a period (WW2 stuff sold years ago and Plains Wars due to hit ebay soon) they've both sat gathering dust mites for years.

hmm, good question - I'm not sure I have any that quite fit your description. I have ones I like that I have played, others I think I like or at least want to give a try, others I've tried (or tried to read) and didn't like, and not many I've read and liked and don't expect to ever play.
I enjoyed reading HG Wells' Little Wars many years ago, but don't own a copy and don't ever expect to play. I guess Grant's The War Game and Young's Charge! are 2 I do own, that are enjoyable books to read, but I don't ever expect to play. I own one of the Piquet rules sets, I would like to try it someday, but I'm not sure how good they are. I think I won't know until I actually try them.

Glad you are on the mend , have a copy of piquet, and everybody tells me how good they are and about once a year I get them out and look at them . But they look complecated and Im getting to old to learn complecated rules - cant be bothered . However have just started using Grants The Wargame and they are excelant , very Old School and once you start playing with them you realise they dont cover all eventualities , so a certain amount free kriegspieling is needed.

Good post John - trust you're feeling better and that the grout doesn't send you in to a relapse....

I think I'd go with FitzBadger as his experience is spookily similar to mine... I'm not a very good rule reader, I can only learn rules by playing them so by that count there aren't any rules that I really like that I haven't played as I have played them all to figure out if I like them....errr... if you get my drift...

...but the Wargame and Charge are books really - have read both of them, like the books & never played either - in my case it was because (like you) I'd already discovered another set (in my case Featherstone) and was happy....

..I also has a boxed set of WWII rules called "Command Decision" - every 6 months I'd get it down and admire all the rule books (there were several) in the box, and all the markers, and.... put it straight back on the shelf!

Hmmm, I can only come up with two.

Firstly a duplicate, Grants "The War Game" as I used "Charge" instead, but it is a good inspirational book.

Then Pony Wars, an excellent set of rules, which I used for the basis of my Zulu Wars rules. I've got the Cavalry and Mounted Indians painted, but I never got around to finishing the dismounted Indians

Like Lance Armstrong, you're running out of optional body parts and getting down to having only basics! I hope your recovery is swift and complete.

I have two favorite rulesets that I never used, and for the life of me I don't know why. The first is "1776" by Joe Miceli. It has tons of background information of an era I'm interested in, clear rules, and great illustrations of play. The second one is "The Complete Brigadier" by Frying Pan & Blanket Amalgamated. It covers the whole Horse & Musket period, and is a snappy product with all the bells and whistles.

I pull them out from time to time, when they bubble up from the wargaming stuff swamp I have around here, yet they still await their first go on the tabletop. Sigh!

Too many to list! At least twenty sets for horse and musket alone.

SvP I have played three or four times. With a knowledgeable umpire, they represent one of the best gaming experiences I have ever had. Yes, ever. Why haven't I played more? Who knows. More games are possible now a friend has acquired a load of 15mm, but Blood & Sand are up first.

I bought a weighty tome many years ago from Emperor's Headquarters called "Chef de battalion ." It is for Napoleonic wargaming at the tactical level. It has moved from house to house with me but I have never tried to play it. Have any of you ever used it?
Alan

I have about a half dozen of the Warhammer Historical rules books that I bought mainly for the eye candy factor. Their Fall of the West book is particularly good.

Another set that I like to peruse is Playable Napoleonic Wargames by He Who Shall Not Be Named. The rules are easy to understand, the sample game with pictures of the action on each turn was an idea that was ahead of its time and sorely needed. The pictures of Bill Gaskin's Napoleonic collection also make this set a keeper.

I have 1644 but have never played the rules. They look like fun - Warhammer style stuff here.

I bought Empire as a favor to my friend Todd Fisher. The rules are unplayable, but the box is nice.

Fire & Fury - one of the best looking ACW sets of rules every produced. It set the industry standard for production values.

I'm glad to hear that you are well and on the mend John.

Best rules I never use?
Hmmm... don't know, I've never used them.
However... TSATF are on the shelf unused and they seem pretty good at first reading. WECW also unused, but they were not what I was expecting and not as clear as 1644, imo.
DBR.Unused. Too bland to my eye.

Rules I've got, used, and wish I hadn't: DBA. A waste of ten minutes precious time on the planet.

Great topic John. Haven't missed my gall bladder since removal 4 years ago. It probably hasn't missed me much either!
Wishing you a good strong recovery.

You are absolutely right about WRG's Corps d'Armee - they ARE pretty much unplayable (well we certainly struggled, despite having the author with us!)Too much unnecessary detail, and too much messing about. (the author didn't seem to know what exactly Archduke Karl had in mind for his "masse" formation either, but that's another story.) Funnily enough, last I heard, was was playing V&B!

good to see you back in action. Rules- London Wargames Section, "Rules for American Civil War 1863c" (sic) by John Tunstill and others, published January 1969. This was the first set of commercial rules I ever bought (I think in 1970). They featured prominently in his magazine "Miniature Wargames" in particulasr in the ACW camnpaign set in Ireland... they introduced me to a totally different world to Featherstone- 1 figure = 33 men, ground and time scales, height of woods, a move was a "bound" (so is someone moving his figures referred to as "bounder"?) etc. Although very interesting I found them rather complex, frankly needlessly so as the DF approach seemed quite adequate. Featherstone himself once said that he had never bothered with time or ground scales and it had never affected his wargaming. At the time I was getting to grips with Featherstone`s "Advanced Wargames" and soon after got hold of "War Game Campaigns", so the Tunstill rules stayed on the shelf...

With great anticipation, some years ago, I ordered PBI - a set of WWII rules for 15mm troops from Peter Pig. I could not understand it. It seems to require a mind-set that I do not posess. Also the brightly colored paper gives me a headache when I peruse it.

I also have a similar problem with the "Sharp Practice" rules set for Napoleonic Skirmish gaming. The paper is a soothing and conventional white, and the illustrations are lovely, but the writers and I are just not coming from the same universe...

John -- you say you've never played "The War Game" rules -- so what do you think we were using for our refight of Mollwitz at partizan?

Did the doctors remove your recollection along with your gall bladder?

Or is it just that the memory of your dice rolling for canister against my charging light horsemen is just too painful and has been conveniently erased...? :-)

I thought I did not include it because I did so much more talking than playing. But you are correct I had also managed to block out any unpleasantness with the dice.

I do have a duty though to protect my readers from such tasteless gloating, so I will probably just delete your post.

A bit of tasteless gloating goes a long way in my book, since it's extremely rare to have anything to gloat about!