Coming over a bit Gallic

I was thinking the other night about Paris in 1863, specifically about the Salon of the Refusal .

Well I cannot imagine that I was the only one to be spending time reflecting on how the French art establishment had become so stuffy and hide bound that it refused to exhibit the new paintings of Manet and as a result an 'alternative' exhibition created the seeds for Impressionism. Though it is possible that I am the only one thinking of it in terms of wargames figures. 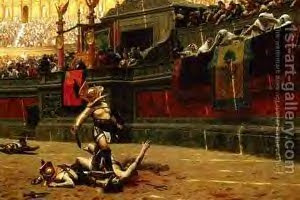 A typical Acadamie work. Not the best reproduction I am afraid, but if you look at the gladiators chest you can see the flesh shadowed in a way that might have used the foundry three colour flesh system.

The establishment painters valued by the Académie used carefully blended layers of paint in sombre colours to achieve realistic and natural effects. brushstrokes were blended away and transparent glazes were used over the paint. The Acadamie was actively hostile to other styles of painting.

Manet began to develop a freer manner, creating form not through a gradual blending of tones, but with discrete areas of color side by side.Viewers were not used to flat space and shallow volumes in painting. To many, Manet's "color patches" appeared unfinished. The impressionists took further the laying side by side of
blocks of bright colour to convey light and movement. Impressionist art is a style in which the artist captures the image of an object as someone would see it if they just caught a glimpse of it. 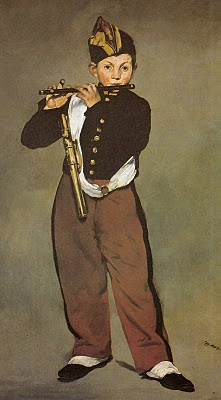 This picture by Manet was painted in 1866 and was refused by the Paris Salon. It only hints at the palette and techniques which the impressionists would develop but already the flatness of the jacket is a world away from shading and highlighting.

I am not suggesting that blended and glazed effects were inherently 'bad'. In fact I feel that many modern figure designers and painters have a good deal in common with the English contemporary Pre Raphaelite painters. They both emphasise detail that would not be visible in real life, ignore the way that colour fades with distance and use a rich palette of vivid colours to get their effects. 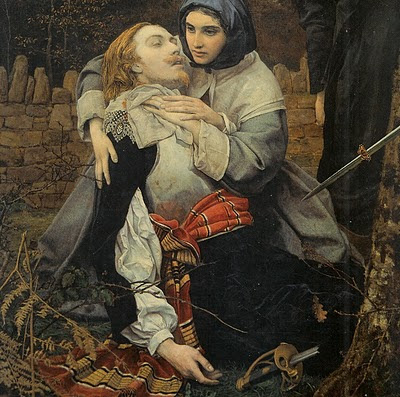 A wounded cavalier. W S Burton 1856. Which of us would not be pleased to paint the rich detail on the cavaliers sash crisp and sharply outlined. Or to get the carefully blended 'three greys on the womans dress. And has that skirt been washed with a sepia ink?
to be continued................
Posted by johnpreece at 12:20

Like the Foundry three colour dig, but I think the head of that gladiator must be at least two times too small...

I must say, I definately of the Manet school of figure painting, though my tastes in art lean more to the Academe.

The problem with contempory art college is that they foget the first rule of art school.

Hmmm, I've always enjoyed Pre-Raphaelite images (often for the subject matter) . . . but I can't say that it has influenced my painting style since I tend to ignore any details that I can't see at wargaming distances.

Still, I'm probably not typical. This is an interesting subject and I hope that you will continue with it.