Good Enough? What does that mean to you?

For me last years high points, were the works of Messrs Grant and Olley, and the finest of their books has to be Wargaming in History. In my opinion right up there with Charge and The Wargame. 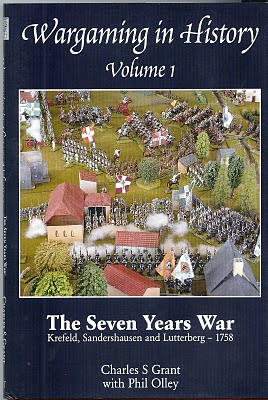 No shortage of inspirational and thought provoking material, but the last week I have been mainly pondering on:

"It will be most unusual for wargamers to collect and paint armies of a particular period without an interest in the history and an understanding of the tactics of the troops and their uniforms."

For myself that is something of an understatement, all too often raising a new wargames army had been akin to taking a tiger by the tail - impossible to let go. Casually picking up a few 20mm figures for the Spanish Civil War because the Civil Guard hats were funny, resulted in a fifteen year study of the war (so far) and a couple of thousand painted figures, vehicles and buildings.

Perhaps that is the reason why I could never really come to grips with the 18C imaginations. I liked the idea well enough but frankly so much of it seemed to lack any substance or, to be honest, relevance to anyone apart from the author. I found myself very much more attracted by Peter Young's distinction between Imaginary armies and Fictional ones. Fictional characters and armies operate within the framework of a real world but one that is slightly skewed. Of course to do this it is necessary to actually know something of the world in which they are set, and I know absolutely nothing about the functioning of the Reichskrieg. 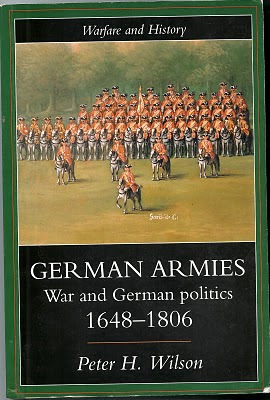 As a result I have spent much of the last month trying to come to terms with the Holy Roman Empire in general and the 18C Reichsarmee in particular. I now know how many Electoral Circles there were and which were ecclesiastic or secular. I can tell you the difference between a Landgraf and a Margraf though my spelling of either is pretty dodgy. I can list the rivals to Prussia as dominant states in the Empire at the end of the 17C. (Bavaria, Saxony, Hanover and Munster, since you ask. ... Munster????).

And how exactly does all of that enhance my wargaming? I don't know to be honest but the truth is that it does. I am looking forward to finally getting to terms with the period as next years big project. I have sorted out the figures that I wish to use and planned a painting style that will be quick and simple. I shall try to raise four small armies for the States of Hanover, Bavaria, The Ecclesiastical Circle of Munster, and Bohemia. 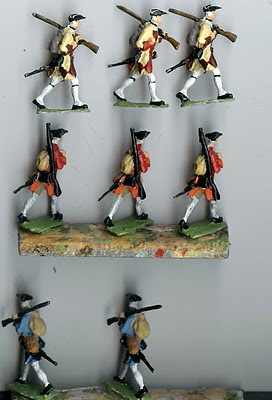 Above can be seen the first rough drafts for Bavaria, Hanover and Bohemia. (spot the fictional one) And below the first finished recruits for the Bohemian Wenceslas Regt of foot. You may notice that one figure is black lined and one is not. I think that I shall not bother black lining this army, to my mind the difference is not worth the time required and when the figures are glossed to a degree that a Guards RSM could see his face in them then it will not be that visible. 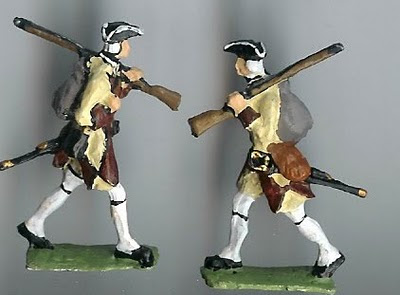 In conclusion we are looking at a project which is set up to be rather heavy on research but light on painting. Good enough? Well only time will tell on that but I am interested in how other people arrive at these decision's.
Hopefully more on these armys in the New Year, but next I shall return to my traditonal Christmas posts on Wargaming BF (Before Featherstone)

Long time no hear! Excellent posting by the way and worth the wait. I think one of the reasons the armed forces of Imagi-natiions appeals so much, is the option to scale the conflict from skirmish to major encounter. The flexibility of conducting a totally fictional campaign is also attractive, since one can only re-stage the Battle Of Rossbach so many times before losing interest.

Mr. Grant and Mr. Olley have Wargaming In History: Vol. 2 out now as well, and it is a worthy follow on to Vol. 1.

Good looking figures there. Holger Erikssons? IN any case, looking forward to reading more about this project.

woah! woah!!! What figures are those? They look like a cross between some Prince August semi-flats and some 54mm Victorian toy soldiers I have, probably sculpted by the great HE. (all hail) So are these SAE or something? 30mm I presume? Absolutely lovely figures and I'm glad I can't get them! Which one is the black lined one btw?

As for imaginary vs fictional, I like the fictional approach but am having difficulty with the degree of tampering with the history of real people that is involved. (to the point of starting to worry about existing corporations accidently finding my blog and approaching me about libel). It seems that what is obscure to me, is perfectly well known to others. Mind you the farther back you go in history, the safer it probably is.

As far as painting, I don't derive my main satisfaction from modelling abd displaying so getting them on the table faster with a process that is enjoyable rather than a chore is my path these days. I also feel more comfortable pushing around soldiers rather than behind-glass objets d'art that I snuck out when no one was looking.
-Ross

of course I should have said that these are 30mm Holger Eriksson figures. They are from the range he produced himself of the Swedish Army in the Great Northern war.

I have painted quite a few caalry over the last few yars but the infantry castings have languished up until now.

I believe that the SSM figures that work so well for the seven years war were in fact modelled from the SAE castings for the AWI.

Enough with the initials for now.

Hello John,
Exelent figures!. Are they original figures or you have made some conversions?. I couldn´t found them in the current catalogues of Spencer Smith HE range or HE site.
Regards, Cesar.

nice to hear from another Holger Eriksson enthusiast.

Yes they are original figures which are currently available. But I understand why you are confused.

When I first started buying this range five years ago these figures were not listed. About three or four years ago The Tradition site added eight more figures to the range all wth the prefix 54. Officer, drummer standard, NCO, pikeman, grenadier and these two marching figures.

To my mind they are the nicest infantry produced in this range. Spencer Smith may well be able to supply them but you would need to contact Peter Johnstone as they are not in his list at present.

You can see them by going to Tradition, selecting HE 30mm and scrolling down a good way until you see the prefix 54.

Hello John
Good to see more of your HE figures again

Thank you very much for the information John.
Regards, Cesar

Thank you very much for the information John.
Regards, Cesar