In Wedge we Serve 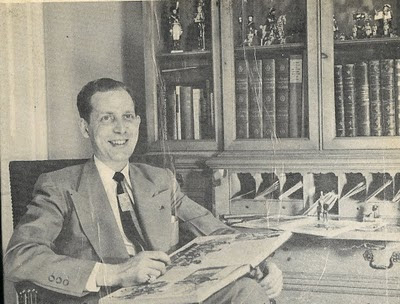 Regular readers will be aware that at this contemplative time of year it is my wont to reflect back to an earlier and possibly more agreeable age. Above we see the typical wargamer of the post war years relaxing at his painting table. The gentleman in question is an American and seems to have stepped straight from the pages of a Nero Wolfe mystery. You will no doubt notice the rather natty summer weight double breasted suit, such informal attire for gaming became acceptable much earlier in the States than in stuffy England. I believe his 'fraternity ring' marks him as a Harvard or Yale man as indeed most model soldier collectors were back then. 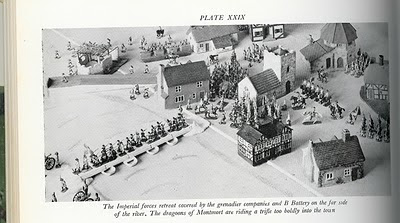 Yet there is a danger in deducing too much from these faded photographs. Wargaming is dreadfully lacking in written evidence for these early years and much like the Archaeologist we find ourselves forming complete systems of gaming from a tiny shard of dice or a crumpled piece of cardboard building. This is at best problematic so often the safest answer is simply to admit that we know very little of how these early gamers actually carried out their wargames.

Take the example above. One of the best known of early images of gaming taken from the great work Charge.
And detailing the battle of Sittangbad, yet look closer. What is that item in the top left corner? Yes the one running alongside the river with a Light Infantryman standing on it. I have tried telling myself variously that it is an improvised breastwork or a wharf of some kind. 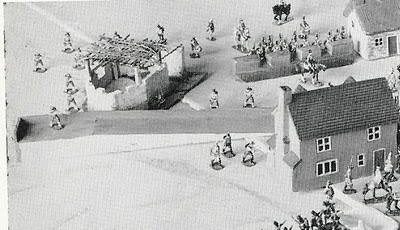 But Please lets be honest, it is a Wedge. Pure and simple a Wedge in the middle of the battlefield. Why? I have no idea. Oh well just an isolated anomaly you say, but wait look at this picture of a group of US gamers taken some time in the fifties. Quite a lot to comment on in this picture I think you will agree and will return to it * but just for now concentrate on the far right of the table. 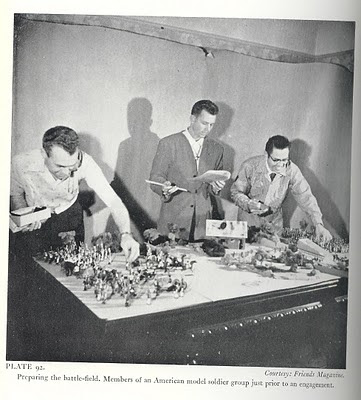 Yes that's right the gamer laying out his figures is clearly using a wedge to assist him. What did it do? and why did such a common and essential piece of equipment simply disappear from the history of the hobby. Perhaps one day we will now but for now we can only speculate. 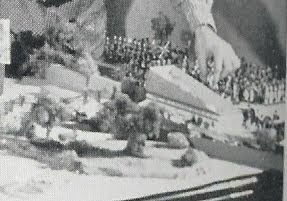 * shall discuss some of the disturbing aspects of this image on Christmas eve as being a time more suited for the unusual and supernatural but in the meantime may I invite you to study it and decide whether you can discern anything strange.
Posted by johnpreece at 13:20

There seems to have been much use of improvised items as terrain in those days but surely that is not a wedge of old chedder seized off the side tray and pressed into service?

I can see the point of the wedge for moving troops on a flat surface.

I very much doubt that a cheese wedge would survive very long at my wargames table...

Toy soldiers were expensive back then - so you needed a lot of wedge...

John, don't worry I think I have the answer - it's not a wedge at all but a ramp.

Can you tell me what make of figures appear in the pictures of the painted figures first of all I thought they were Spencer Smith and then Prince August but I cannot find the figure with the shouldered musket in either ranges.