At last a start is made.

Finally, I get around to making a start on the figures. I have decided to start with some French. In fact these figures are fairly generic so it’s a matter of choosing a pose I like. But first a bit of DIY. 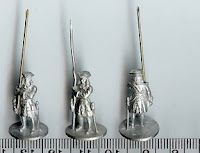 I remove the cast on pole from the standard bearer and glue in a new one from some 1/32 brass rod. A 30p rod gave me 8 x 35mm lengths. The metal is soft enough to flatten easily in a smooth pliers and a few strokes of a file suggested a spear end. The hand was drilled out with a Dremel bit. Well, I say Dremel but in fact it was a cheap Chinese rip off that I bought for £20. The drill does tend to sit off centre and whirl around erratically chewing up the surface before eventually plunging in some distance from where it was first placed. But apart from that it is every bit as good as the brand name version

Next looking around in the box, I find a surprise. There are two variations on the drummer figure. This was not indicated by the catalogue and is a nice bonus. I shall have to check with the current manufacturers whether they have both types in their range now. I decide the smaller chap without lacing looks more French. 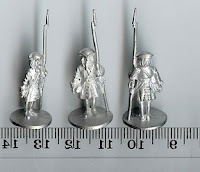 That brings up another point, ordinary line regiments would not have the lace bars that are modelled on these figures. Perfect for Gardes Francaise but really I will have to trim these off this regiment. I suppose while I am doing it the bayonet can go as well. I must get in touch with the manufacturers and check whether there is any chance at all of a version with a belly pouch. Typical, I sought out these figure for their classic uncluttered style and already I am obsessing about details.

I sort out Officer, drummer, standard and 13 men, then do the same again. I prefer to paint in lager batches and sixteen is not really worth mixing paint for. I shall try 2 battalions this time and see how it goes. Enough for one night, not a lot done but finally I am underway,
Posted by johnpreece at 16:05

Any thoughts on rules, by the way - will you use "Charge!"?

Dear Sarge ,
The standard bearers look superb with the new staffs. Well done ! You do seem on the verge of going over the edge on details ...a hobby trait I think.
cordially ,
David Corbett

Changing one's mind, obsessing about details, and basically doing things the way one wants (often on a whim) with absolutely no regard for logic. I think that's where all the fun lies.