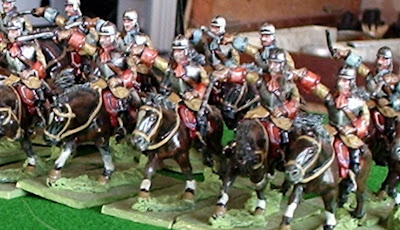 I am taken aback at the number of interesting comments made in response to my last entry. The issue of painting styles is a huge and fascinating subject on its own and though I am dying to talk of undercoats and light,pigments and physics, I hope you will forgive me if I leave that aside for a while and pick up on a very interesting question from Jubilo, who asks:

Dear Sarge ,
One has to ask if the figures are to be used for gaming or dioramas ? The overly painted and shaded figures featured in the hobby magazines tend to look rather bizarre and "super-hero "-like . The simpler paint jobs look better from several feet away ( war gamer distance ).
Is a ten musket unit going to look like a period battalion or is the ten musket unit that size for gaming ? No criticism here only curiosity. Carry on .
all for the old flag,

Jubilo cuts through all the waffle and asks "What are they for ? "

What a good question! Luckily I have thought hard enough about this to be able to answer. They are for gaming with. They are not going to sit in a display cabinet, so I do not want people to pick up individual pieces and admire them. I do not want elaborately based vignettes, that are really 54mm display pieces that never grew up. Nothing over detailed, nothing fussy, nothing that detracts from clean lines and the beautiful simplicity of the figures. 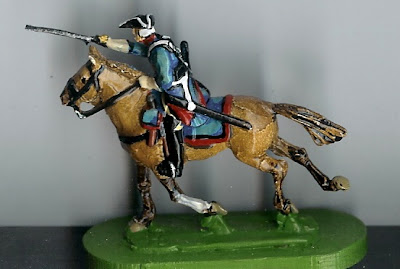 But like so many of us, this is not my first army. The choices I make will not necessarily be the same as if I didn't already have 10,000 painted figures in the garage. So I am not going to paint these in a simple toy soldier style because I already have a seven year war army in this style and I hope to add a Crimean army in the same vein. I have 20mm ACW armies that are inkwashed and dry brushed to suit the modern eye. So this time somehing in between I hope. Enough shading toset them apart from toys but certainly avoiding the fashionable excesses and cartoon styles.

I intend that to all intents and purposes each battalion in this current project will be an individual gaming piece. Now I wasted many years in my youth going down the "its the base size that's important, the figures are merely there for decoration" road. I certainly don't want anymore to do with that load of old nonsense. But using gaming elements of a unit on each base has a long ancestry going right back to Joe Morschauser in 1962, so I am ok with giving them a run out again for this project.

Twelve men has been chosen as being the smallest number that doesn't look silly. It is also near the largest that will sit comfortably on a single base. So the driving force there is to construct a workable and pleasing gaming element. However I am hoping that the use of these bases will enhance the linear effect of the battlefield and avoid the giant rugby scrum that often develops with big battalions. 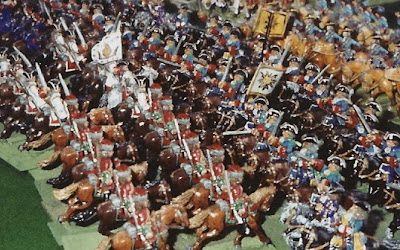 I am hoping that the small units will give an effect similar in style to a contemporary battle print.

John this is all looking very promising. I like mustering an army of the period as so many battalions and squadrons. Have you given consideration to whether to go with tracking incremental damage (ie rosters or casualty caps (shiver)), or just have each battalion finctioning, disrupted (or some such term) or dead?

When I went to 15mm for the WSS project it didn't look quite so elegant so I doubled up, purely for size and aesthetics reasons....

I still reckon that for your guys it will look good, and for the much larger numbers engaged in WSS battles is eminently sensible..

Where is that period print from, Mr. Preece? I just came back to this post from a link to another post, and was interested to see that it looks as if 24 figures (+ a few staff figures) in three ranks is a sufficient depiction of a battalion for the artist. Curiously close to the mid-ranged battalion size that seems to be popular between the 12-figure battalion and the "big battalions".