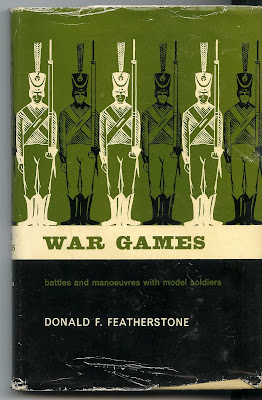 There are many people who know Mr Featherstone far more personally than I do, but there are also a few to whom he is a shadowy figure, for them I pen a few of my views of his great contribution to wargaming. 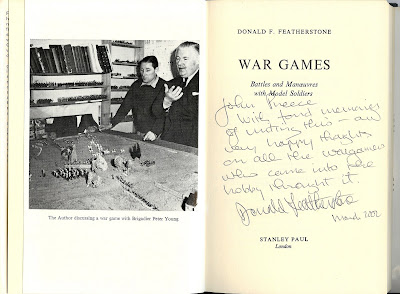 Mr Featherstone recounts that his father was absent for much of his childhood, however he compensated for this by sending spectacular presents of toy soldiers and castles at Christmas time. The seed was planted, but life intervened for a number of years firstly a spell in the services took up a good chunk of his twenties. He served in the tank corps becoming a sergeant eventually and seeing action in North Africa and Italy. Although he saw his share of events that nowadays would be trauma inducing he remains unabashed in his huge enjoyment of his time in the army.

After the war he became a physiotherapist and achieved notable success in his profession. Author of six or so books with titles like ; Be fit at forty, and Back injuries for Firemen and of course Ballet Injuries, he also was physio for Southampton Football Club and Hampshire Cricket team, both first class English sporting sides.

In addition to being ninety Don is in his 53rd year of continuous wargaming, he entered the hobby in 1955. He was by no means the first wargamer in the UK but his fair for publicity and his attractive writing style made his book Wargame 1962 a runaway best seller. Well alright not quite that but it remained in print for years and sold many thousands of copies. Several further books followed and then in the early seventies an avalanche of his titles made their appearance on library shelves throughout the UK. 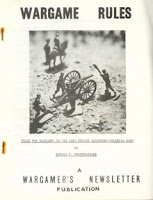 His greatest contribution, though was as editor of the famous Wargamers Newsletter which ran monthly from the mid sixties until 1983(?). This enabled the spread of ideas and reports from even the most isolated of gamers. Never one to shrink an argument Don's editorials were a highlight of each magazine as the Labour government, pacifists, the WRG and especially John Tunstill and the London Wargames Group came in for castigation.

Inevitably as clubs prospered and rules and magazines became more commercial, the Newsletter faded. Don moved to his first love of military history and penned many more books and articles. He remained a keen wargamer meeting with a tiny group of friends at his home in Southampton every week, but increasingly isolated from the British scene. 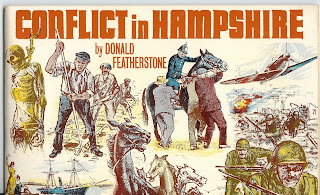 However our friend in the US came up trumps spectacularly where his own country treated him so shabbily. He became a guest of honour at several US conventions and derived great pleasure from the way he was feted over there. Eventually the pendulum swung and with increasing maturity the British gamers realised the debt they owed to him. He was guest of honour at Salute last year, a welcome though overdue plaudit.

He has suffered losses in his private life recently but I believe remains in good health and still (I hope) is still gaming at 90 and still providing us with an example to try and emulate. 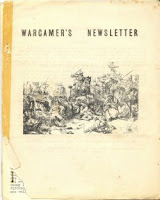 A very Happy Birthday to Mr Featherstone, I shall raise a glass of the good malt tonight in his honour.

Thanks to Patrick of OSW for the prompt.
Posted by johnpreece at 12:19

There is even a wargame club in the Kansas City area of the US called HATSOFF: Heart of America Tactical and Strategic Order of the Followers of Featherstone.

Dear Sarge ,
Yes , we Yanks hold Featherstone in high regard . He is English of a type seldom seen anymore . I wonder how C.F. Wesencraft fares ?
cordially ,
David Corbett

Bravo, happy birthday and thank you, Mr. Featherstone!
I, too, spent many hours in my youth perusing his works, Solo Wargaming being a particular favorite.

I have never had a chance to read any of his books nor have I ever had the chance to meet him in person unfortunately. Hope he keeps wargaming till he can't wargame any more!

John - nicely put indeed - I was introduced to the game by Don's books back in the early 70's so you can imagine how I felt when I finally got to meet him, and shake him by the hand last year at Colours - I suspect he wondered who the mad jabbering fool grabbing his hand was, but I have to say that I still remember it fondly... amazing guy... I'd heard that he wasn't gaming so much these days, does he still play, and if so, what I wonder?? :o)

As i remember it DF gave away his extensive library a few years back (apparently had some difficulty finding a willing recipient!) and his last army (ACW?) was sold last year. I think he had a heart attack a couple of years ago that really set him back. Oh yes...belated happy birthday Don.

In 1976 in a public library ib my home town of Stoke on Trent, I piced up a book called 'Battles with model Soldiers' From that day on I have enjoyed a hobby, a pastime, a passion all due to this man. I salute you Mr Featherstone, you are a pioneer of the wargaming world and I send you my sincerest thanks and best wishes.

Through Belfast's darkest hours (1970s), I remember being enthralled by Donald Featherstone's books as a 12 year old.

So much so that i would often feign sleep when my mum came to check on me and then emerge from the covers to read the book via chinks of light from the hall!

'Solo Wargaming' remains my favourite. Alas, I 'moved' on to SPI board games and left the hobby behind in my early 20s. Maybe time for a relaunch!

Charlie Wesencraft is now 80, leaves in the North of England and still wargames every week. I am reproducing his two books as part of the History of Wargaming Project.

Don is now 90, still lives in Southampton, UK. He can still be seen at wargaming conventions in the South of England.