I shall resist the temptation to any false modesty or coyness. I have been a bit busy the last few days because I had Stuart Asquith as a house guest.

The presence of his charming wife (wargames wives are always referred to as charming but his genuinely is) restricted the talk of toys and manufacturers and wargamers to no more than 12 or 15 hours a day, nevertheless we covered quite a bit of ground in that time.

Obviously on such visits quite a bit of time is spent in the garage or loft rooting around through long forgotten boxes as well as showing off treasured units. Among the modern ranges that looked especially nice were the Front Rank Spanish Napoleonic, but inevitably we concentrated on those figures from long ago that have retained their charm.

The Omdurman range from Barry Minot was only available for four or five years but together with his Zulu war ranges they were an unusually comprehensive selection for those days. They never included cavalry, I suspect that he may have been less confident with equine anatomy, especially since his charging camels were some of the strangest beasts one could ever wish to see. I had many in my youth but sold them years ago, but recently through the good offices of a friend I was able to buy back the British Infantry. The sit alone at present without any foe to trouble their slumbers.

My small collection of Holger Eriksson 30mm figures also provoked interest and we soon had them on the dining room table refighting Blasthoff Heath once more with the help of two batteries of Napoleonic Spanish and Austrian artillery. (I lost of course). 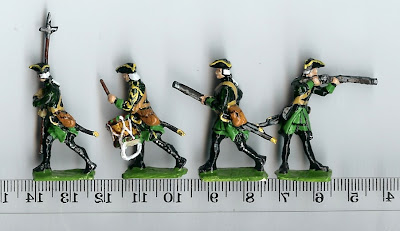 Now I sit alone in tranquility ready to get on with my Marlburians, but my resolve is weakened by all the alternatives presented during the weekend. I could easily just go and get that regt of Holger Eriksson Dragoons that only need black lining in order to be finished. Or maybe paint up a few Afghans for my British to skirmish with.

I think I can resist that, but worst of all somehow I have acquired a few reinforcements for my English Civil war armies. Perhaps the best thing would be to simply sit down and paint some for a couple of days and get it out of my system before returning to the Les Higgins refreshed. This is the trouble with combining a hobby of limitless fascination with the concentration span of a chicken.

That would be a pleasure indeed to be able to sit and chat with Mr. Asquith.

I really ought to be evil and tempt you to do that Holger Erikson black-lining so we could see what they look like. :>

..no, no, those Minots are exquisite! :o)) Hordes of screaming Dervish charging across the dusty plain towards their steady ranks..........

I too am a fan of Minot. His AWI designs were wonderful too - sadly only a few are available from Spencer Smith. Rob Young at Garrison has many of the other moulds but is unwilling to tread on Peter Johnstone's toes. Which is a shame - from my purely selfish point of view.

That's rather sad news about the Barry Minot figures. I think it's a shame on two levels, obviously because it takes the figures away from us.

More importantly I am sure that having the choice of extra figures for the range would increase the sales for Peter, not decrease them.

Really no one out there is pondering 'should I use Minot figures or Perry.' They could well be saying, 'if only the Minot range was bigger I would love to have a workable army of those classicly styled figures.'

Still, one must never, ever interfere in another mans business.

Which was the winning side in your refight of BlastHof? I have always thought Kornberg's OOB was slightly inferior.

Mmm Mr Asquith, I thought he was D... anyway, love the blog. I grudgingly inform you that it has been added to my favourites. Have you heard from Don recently? Yours Jonny Gruntfuttock.

Hi there John
Those Minot figures look great - not a range I have ever seen before although I remember the name. Are they 30mm scale?
Great stuff!
Ian