Its a flat world after all

Time to move on from painting, I think, before some of my gentle readers do themselves a mischief. But before I do I would like to round up a few of the ideas that have presented over the last week.

First off if anyone thinks the purpose of these posts has been to tell people how they should be doing it, I have missed the mark. I am telling you how I do it, I am quite prepared to believe that you can do it better. All that I really would like to see is a broadening of the discussion, so that the average painter no longer has to feel it necessary to apologise for what they produce. In which spirit thanks to Glynis and Gary who say that are using Red Oxide undercoat from the garage to provide a surface that gives depth and lustre to acrylics. I have a tin somewhere and will definitely try this as an undercoat for horses.

As you can see from the pictures I put up in my last post the effects gained from the different paint and ink finishes varies, some good some, some not so. However what is becoming clear is that there a real variance between what works on the table and what works in a photograph. Murdock gives a good illustration of the way inks can glow in a photo:

I found that the Austrians finished in white undercoat and ink wash look very odd on the post but fine in real life, while the rather scruffy Old Glory Prussian looks far better than he does on the table. Black undercoating really is essential for a figure that is to be photographed under bright light.

This got me thinking, the three shade system has been around for many years, it is virtually identical to the way the old masters of the 30mm flat used to paint their figures. Because they were two dimensional all the folds and shadows had to be painted in, and a palette of saturated colour gave life to the little slips of metal. Of course all this ended when the round figure came in, when you handed it around or looked at it on the table you could see the way the light made shadows and highlights, subtle effects and colours could be appreciated by the eye. 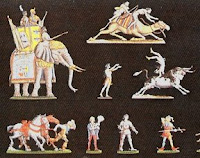 But a photo is a flat image, it is dead and cannot show the way light reflects and moves. Is this the driving force that has changed painting styles and altered figure design? Simply the wish to make the figure look good on the printed page. Why not, how many of us see these pieces in the flesh? The image is everything whether advertising a new range of figures or simply making an eye catching illustration.

Has the hobby moved so much that image is more important than the reality of a game in ones back room or the local club?

Sorry about the quality of the illustrations, can you believe I simply couldn't find a really good shot of a single flat?

And now enough of painting, back to Flanders.
Posted by johnpreece at 08:15

Interesting thoughts there John. certainly with the advent of mags like Wargames Illustrated we have become used to seeing beautifully painted minis close up. few of the photos show the en masse effect on the tabletop.

certainly cause for thought.

Great observation about the flats and the 3-colour methods reminded me about my own efforts on some Prince August Russian minis I cast a couple of years ago.

The Prince August minis are very low on detail (so that the moulds do not 'burn out' too fast as lots of undercuts and raised details will tear the two-sided moulds quickly. I used the 'suggestion' of detail method from Rembrandt style paintings of Spanish Conquistadores where seemingly random moves of the brush create the 'illusion' of a highly detailed and etched breastplate.

I still use this sort of technique on the 'pants' and sleeves areas of uniformed minis. I do it to give the 'illusion' of deeper folds and shadows than are actually present on the minis. I also used the same sort of techniques on these Russians to create 'seams' in the back of the tunic and shoulder shadow areas which are not otherwise present on the 'flat' back of these minis.

Indeed, more interesting musings. GM has it right - over the past 10 years or so magazines and then the internet have given far more emphasis to individual figures and "close-up" painting styles. It would be highly unfortunate if people were put off the hobby (or generally made to feel peeved off) by the thought that every gamer's painting had to reach the giddy heights we see on the front cover of WI or on Steve Dean's website. There will always be people who want to churn to figures out qwuickly for practical purposes and those who want to linger over the painting for aesthetic purposes. One of the things I like about this hobby is that there is more than enbough room for both types of people (and of course plenty of overlap between the two "camps"). I any event, not all figures lend themselves to a 3-colour going-over and benefit from a more "minimalist" approach.

What is highly subjective though is any concept of an "ideal viewing distance" for wargames figures. Every game I have seen has involved people picking up figures and giving them a close inspection - in fact people do that far more than stand a few paces back from the table to survey the scene as a whole...

what annoys me (slightly) is the suggestion by most hobby media that foundry/dean/impressionistic splodging is the zenith of figure painting. i disagree, obviously. sadly i know some experienced wargamers who switched from their own effective style to black undercoat (which they have never mastered) because, i suspect, they felt they 'had' to.

I agree with Giles that almost everyone will stoop to examine the figures as closely as possible at a show, or if with friends actually pick them up. Whether that means that they are interested in the technique or that there is some kind of 'natural' distance at which it feels right to view them I honestly don't know.

It occurs to me that we are very limited in vocabulary to try and discuss these issues. At best Black or white undercoating or thee layer method are generalisations and misleading. At worst,words like 'best' or 'right' or 'most skillful', are pointless and can cause resentment.

I agree that there is room for all kinds of painting, and I love to see as many styles as possible encouraged and praised BUT just saying that ignores the elephant in the corner, that any kind of attempt to discuss these issues inevitably results in abuse from those who have other viewpoints.

Sadly many people who play with toy soldiers are immature, is that an oxymoron?