My old wargames opponent, James Shepherd made a trip to the depths of North Wales for Easter Weekend.
We had planned to spend the time getting to grips once again with WRG 4th edition ancients. We had very fond memories of games long gone in which Greeks and Persians slugged it out through many a Wednesday night at the club. Why not use them again, or would we find that we no longer were charmed by the degree of mental arithmetic required? In any event we were foiled by my having forgotten that I had banished to the loft all the figures required on the grounds that I would no longer require them! 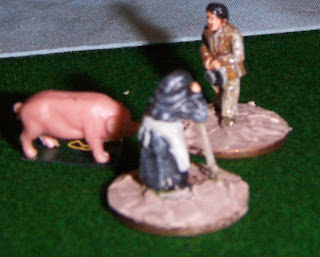 So ignoring sub arctic temperatures we went out to the garage/wargames room and looked for an alternative. It was too cold to contemplate a full game but we pulled out a copy of Contemptible Little Armies Rules, some Spanish Civil War figures and a bottle of Famous Grouse. Suitably equipped we ran through a series of small scenarios, starting with a straight forward assault on a fortified trench line, then introducing machine guns, motor transport and artillery. We enjoyed the straight forward way the rules played and despite a certain amount of cross referencing were able to work out things as we needed them. 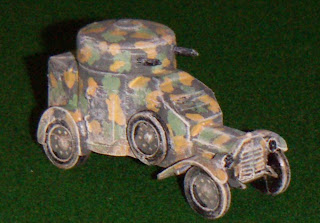 Next day we organised an assault by a Nationalist flying column on a republican held village. Three companies of cavalry, together with a support company and an armoured car attacked a position held by two companies of Assault Guard with a machine gun company and a 75mm field gun. 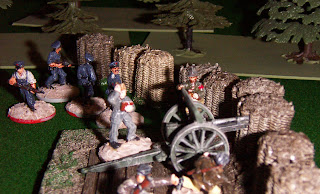 The cavalry was caught by a machine gun which threw a devastating four sixes and two fives from six dice in one move. 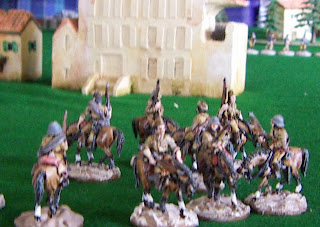 The republican artillery was rubbish, far more casualties were caused by two assault guards with rifles who held out under the bridge. 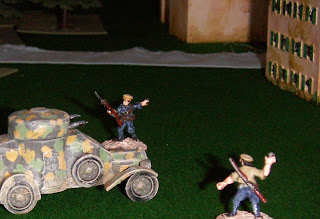 Finally the armoured car advanced alone and, despite the suicidal bravery of a group of Dynamiteros hidden inside a building, cleared the village single handed.
The commissar fled on the back of a motor cycle just in time for us to return to the dining room and enjoy a pre dinner drink. 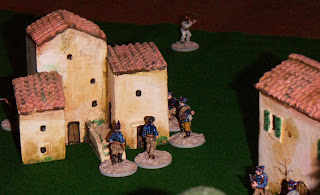 Of course we had not been able to leave the rules alone and soon jettisoned the artillery rules replacing them with Charles Grants' burst circles. Overall though we were pleased and may return to the period with them again. Though next time we hope to avoid the freezing winter hills above Madrid and maybe do something in the baking plains of Andalucia.

The figures are20mm metal from Bandera, Warrior and Irregular the armoured car is Ravensthorpe.

The scenery is very basic and just thrown together, the figures were more or less as they came from the box. Yet an ability to improvise and a hefty dose of imagination provided a game in which the suffering of the militia in their frozen trenches and the armoured car skidding along icy cobbles were every bit as vivid as if the game had featured the very best detailed terrain. Still that may simply be the onset of old age, the next logical step is not to play at all but sit in a warm armchair and just imagine it all! 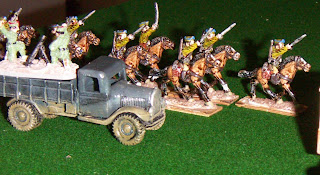 A mortar carrier!!
Posted by johnpreece at 14:07

...and sometimes - as much as you plan & prepare for them - the quick, on the spot, game is better... makes me want to reach out for my copy of "As I Walked Out One Summer Morning"!

John:
What a wonderful post. You are to be counted among the very fortunate to have such a nice collection of figures but , more importanly, a good friend with whom to enjoy them. Your gaming sounded like the stuff Don Featherstone would write about in his column. Well done, sir!
Jerry Lannigan

The SCW seems like one of the ideal wargame periods - lots of variety and scenarios aplenty. My father fought in spain and i've never been able to seriously contemplate turning his experiences into a game. No shortage of other periods to explore of course....

nice work, sir!
Examined most of the blog on the first page. I envy your painting skills of course.
And the opportunity for visitors to come game with you ....
Often wished I could take an extended tour of North Wales, somehow, the travelogues on T.V. don't satisfy.
Thanks for telling us about it on OSW
:)
Arthur

What a glorious Armoured CAr!

A very nice tale indeed and a wonderful collection of figures. Reading this entry inspired me to place my first order with Irregular miniatures. And what fantastic minis they are too, I'm placing another order tomorrow which should give the Nationalists some much needed firepower.
ed