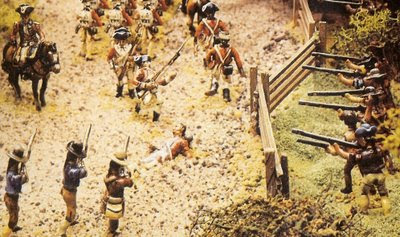 This photo is taken from the wonderful 'Battles of the American Revolution' by Curt Johnstone. It shows the Peter Gilder figures but only hints at the translucent painting style. I spent hours looking at these figures when they adorned the little shop in Meltham that was Hinchliffe's factory outlet. Next door to the Ferguson tractor garage if I recall correctly.
Posted by johnpreece at 07:11

i'm lucky enough to have a fair chunk of the old gilder ecw collection - some of it painted in the fashion you describe. i still use humbrol enamels to paint in a similar style (though the formulation is nowhere near as good as it used to be).

i remember when SA resurfaced (after leaving the hobby after the demise of Practical Wargamer, etc) he wrote to lone warrior explaining he had sold all of his figures - i'm glad to see he hadn't entirely.

...yes indeed! It also strikes me as a remarkably "modern" approach to painting - Mr Gilder, it seems to me, was way ahead of his time??

BTW John, if you're interested i can send you some photos of Gilder's ECW. If you don't have a copy you should get your hands on the old Osprey Wargames titles - Naseby and Leipzig - lots of Gilder therein.

Don't leave us hanging like that. What else did Stuart have to show you? Do tell, do tell!

Further to 'anonymous' reference to the Naseby book, Stuart Asquith wrote it!

Most of the Gilder American Revolution collection resides in the states these days. I might be able to track it down for you if you are interested.

A great honor indeed, and I shall echo Stokes in our hunger to hear more. It's wonderful to get such a chance of insight into the life of one of the greats of the hobby.

I too want to read more of your visit . . . most of us will never have the chance to meet such luminaries.

Come on John - it's been over two weeks! You may have a life but some of us don't - we're hanging on the next installment. What happened next?

I have some of Peter Gilder's Hinton Hunt Napoleonic French cavalry and artillery - there are some pictures on the Hinton Hunter blog. Not just the painting but added detailing could make you weep.