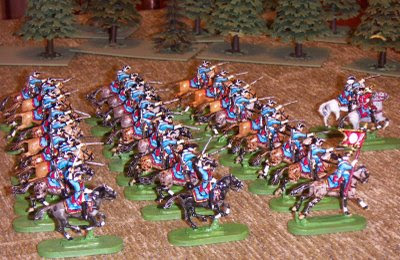 The final unit to be shown on this blog was actually the first that I painted. The Imperial Gendarmes were created for the Game of Sittangbad that we put on at Newark almost three years ago. The bright uniform was originally intended to be complimented by black horses, but Phil Olley nipped in first and created a black horse regt so I switched them to bays and chestnuts, ce la guerre. 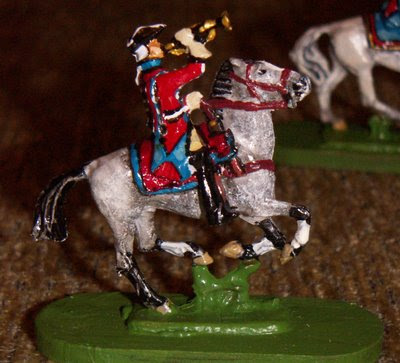 After the game was completed the regiment transferred from the electoral army to that of Bohemia where it is now the senior line cavalry regiment. 'Imperial Gendarme' conjures up sufficient atmosphere for the unit without needing any further history in my opinion. 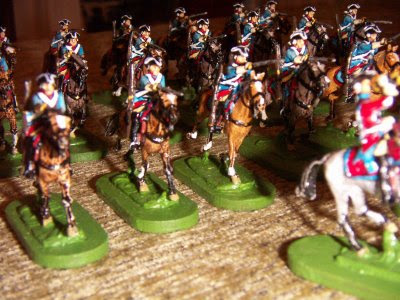 So that is all that I have painted so far. The line infantry will eventually have ivory coloured coats. The facings will be taken from the liturgical calender as befits a staunchly catholic country. Dragoon wear vermilion and Heavy Cavalry Turquoise. 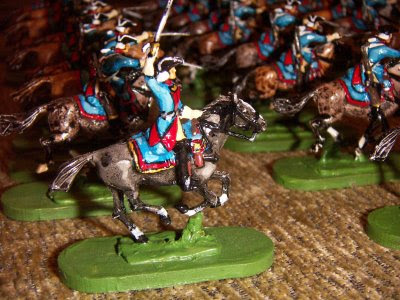 But all of that lies in the future, the next goal will be to get a couple of guns and the first line infantry unit completed so that I have a usable force for gaming. 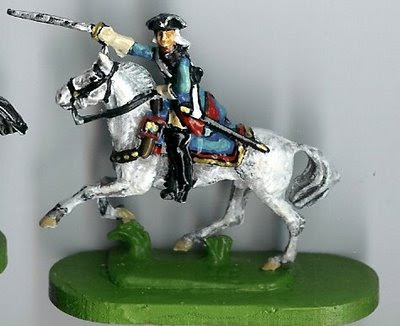 The figures of course are again Holger Eriksson 30mm. To my mind their will never be figures like this around again. Not that the sculptors of today lack talent. I am blown away by some of the work of people like Richard Ansell and the Perry twins. But the way that figures are created has changed. Today people use putty and build up the figure on dolly. they are in effect creating a model. The old masters such as Eriksson carved their figures out of a solid block. In Eriksson's case they were carved from wood. 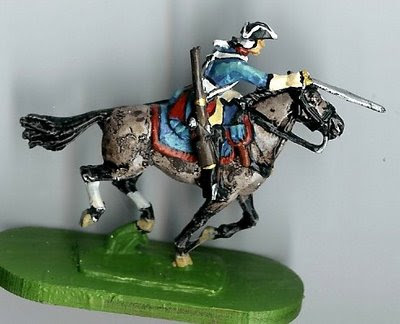 When I was painting them I was much taken by this passage from John Garratt.

"The models are conceived sculpturally and obviously worked with a chisel emphasising the planes which gives great structural strength and truthfulness...it is this emphasis on planes that gives an Eriksson figure such distinction. He paints his models in oils and leaves the planes and contours to make their own contribution without shading." 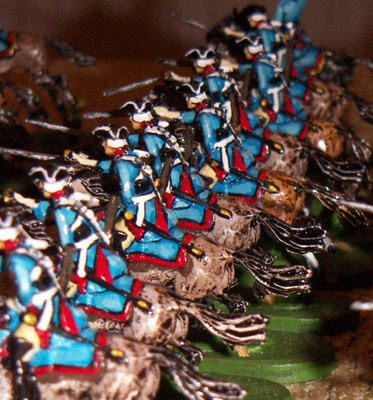 I did not want to leave the figures without any shading myself but I did think hard about the way it should be used to keep the integrity of the figure. I decided to use fairly bold strokes of lighter colour and to attempt emphasis the lines and movement of the figure. 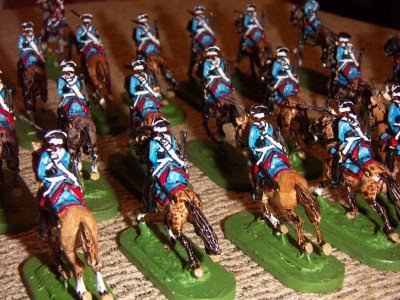 To what extent I succeeded you will have to judge for yourselves! The horse were done either with dilute Humbrol enamel or an Acrylic ink wash. Both over white undercoat. 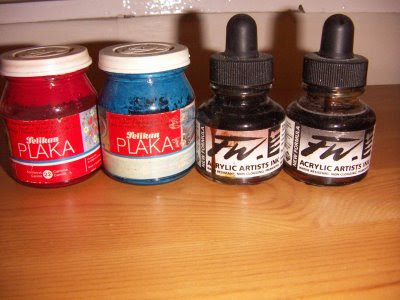 The uniforms were painted with Placka Poster paint. One of the few really nice turquoise blue around and a beautifully deep crimson. Most of the other colours were Vallejo acrylics which I was using a lot at that time for 20mm plastics. 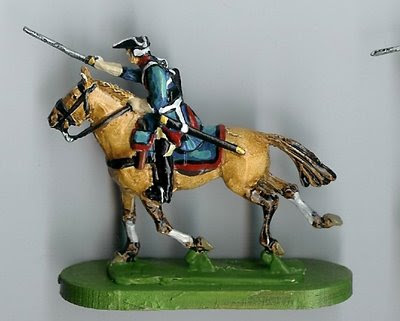 Finally thanks to everyone for the very kind comments. I am course pleased that people like the figures, but I am not preaching to anyone that my way is best. I just love to see what others are doing, and if they are ploughing their own furrow rather than slavishly following White Dwarf so much the better. It is not a question of whose figures are best. The best ones are those that give their owners most pleasure.

Happy Painting!
Posted by johnpreece at 15:47

When you wrote "the final unit to be shown" I thought you meant there weren't going to be any more to come and I was sad. But then you wrote about needing to paint more infantry and such, so there's hope we will get to see more of your wonderful miniatures, right?

I enjoy looking at all of the miniatures other people paint (and sculpt and modify, etc.). It's interesting to see how others approach things and to see nice work, even (especially?) when it's different from my own.

I was hoping that you might include some photos of these cavalry and a description of your painting of said unit. They are scrumptious! Now, what about those red pelissed Spencer Smith hussars from the same Sittangbad game?

We almost share a horse painting style (I undercoat black and then dampbrush with white before using the inks) but my those horses look good... personal favourites are the dappled grey and the last one... lovely figures, they have animation and "purpose"

Thank you for the description of the rationale behind the method of painting. It would be nice if I could claim to benefit from it, but I have never gotten beyond the system of 'well that worked a bit better than the last effort'.

I can only echo Stokes's request for more pictures of more units: they are simply a joy to behold.

Gorgeous figures, they make me itch to dig out my Prince August moulds and do Horse and Musket in yet-another-scale.

Keep up the good work.

Lacking the technical background to ‘judge’ them, or to be worthy of expressing my ‘compliments’, I can only, purely on the basis of aesthetical pleasure, second someone else’s comment that your series of posts is ‘jaw-dropping’.
The Imperial Gendarmes - the individual figures, the regiment, its name- are indeed gorgeous.

Looking forward to discovering the line infantry and artillery of Bohemia!

Thanks I have enjoyed looking at the figures on your own blog. As you say the fascination is in finding how many differing approaches to the same subject there are. Probably as many as their are wargamers. I may well get some of the Foundry civilians, they have an Hogarthian quality about them, which comes through better on your blog than on the Foundry site.

Stokes
I would love to show you the red hussars, they are lovely, unfortunately they are not mine!They were painted by mr Steve Gill, who has no blog at present.

compliments from someone whose work I admire so much are especially valued.

the only wargamer within miles of me is also collecting HE figures but 40mm home cast. They look lovely when properly painted. You would think we could get our act together and both do the same scale wouldn't you? but thats wargamers.

I think looking at your blog that we overlap a lot in techniques and the armies that we produce. You are a lot more prolific than me at present however.

Jean Louis
Iam now finding myself looking at the Spencer Smith site and planning my next unit. So I don't think it will be to far into the new year before a Wenceslas Infantry unit is added. I will be sure to display it in due course.

Is the magnificient Erbprinz Regiment too 'marked' to become part of the Bohemian Might? Guards could have, Gardes Françaises fashion, an uniform quite different from that of the Line...

May I respectively suggest to 'label' your posts (it can be done a posteriori with the 'edit previous messages' utility) for easier and *exhaustive* retrieval of all those devoted to a given topic (e.g. Bohemia...). With time they'll be so numerous...

Inspiring work- keep it up..
Alan

HI John.
Wonderfull painting, i am curious about the shade & brand of green used on the bases, suits these type of troops very well.
paul