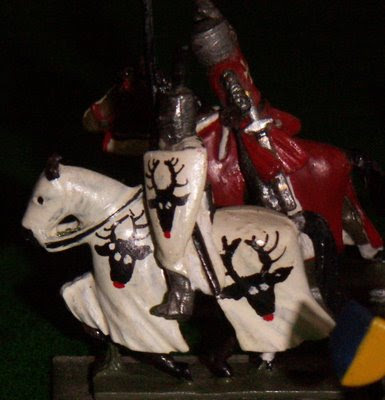 Martin T visited this week and arrived carrying a box full of his beautiful medieval figures. They are all painted for the princelings and nobles of The Holy Roman Empire. His research into heraldry is astonishing. Even more enjoyable the figures are all Lamming, Minifig and a few Hinchliffe. Straight away we set up and were into one of those wonderful 'story games' that used to be played on club nights using the Lamming rules or David Cliff's Retinue set. 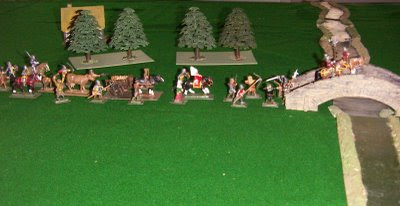 The lovely Princess Elizabeth is travelling to meet her prospective bridegroom, Prince Paladin*. They are entering into a political marriage, arranged by her father King Frederick which will strengthen the respective families. Aged 18, she is as beautiful as she is kind and wise. The column consists of her household, dowry wagons, a local guide and escort of archers and knights.

*Apologies to Martin who has elaborate genealogies and correct German titles for all models, but they just went in one ear... 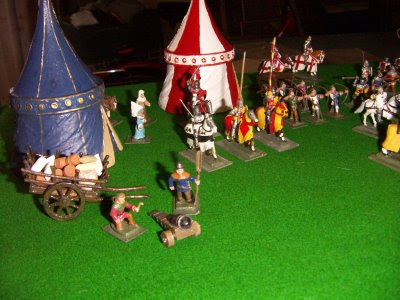 At an elaborately decorated camp the Prince waits to begin the wedding feasts. The Bishop of Krautburgh is on hand to perform the ceremonies. 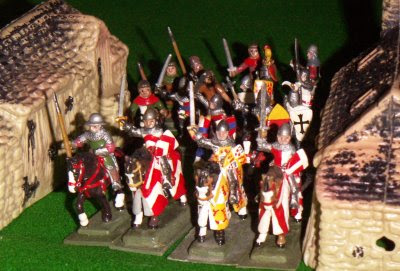 However wicked Count Otto has other plans. In a village he lurks, ready to spring his evil trap and abduct the princess, steal the dowry and slaughter the escort . (yes, 'tis me) 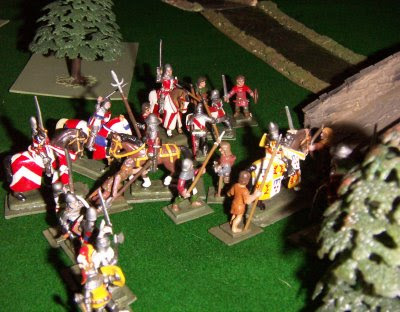 As the train crosses the bridge the trap is sprung. Men at Arms and Archers with 3 mercenary knights attack the rear of the train, disguising themselves as bandits. Count Otto ostensibly rides to the rescue and in the confusion attacks the head of the column . The escort prepare to sell their lives dearly( apart from the guide who hides in the wood.) 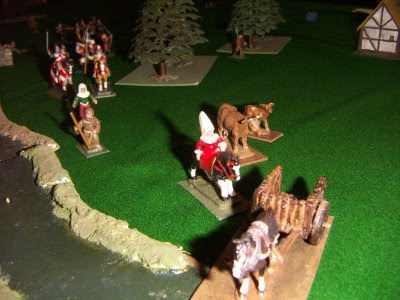 Time to leggit, the princess gamely sets off for the ford,with the rest of her household and wicked Otto in pursuit. 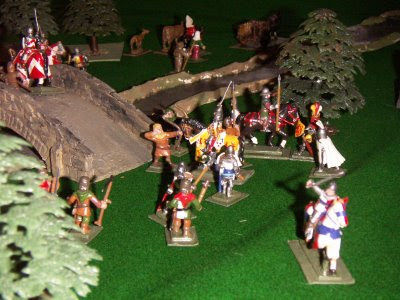 Incredibly, two unarmoured archers hold the bridge for three turns seeing off no less than eight assailants. However they are forced to one side and Otto's, equally wicked, knights ride over the bridge. On the far side of the bridge the foot knight in yellow and red bravely intercepts Otto's horsemen allowing the princess time to gallop for her life. 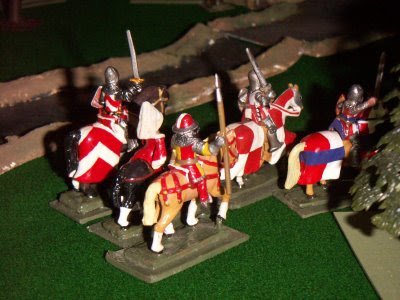 But to no avail, two good dice throws and the leading horseman grabs her bridle just as she reaches the ford.
"Your highness need fear no more, you are under my personal protection now! Heh, Heh, Heh." twirls mustaches; boo! boo ! Boo! 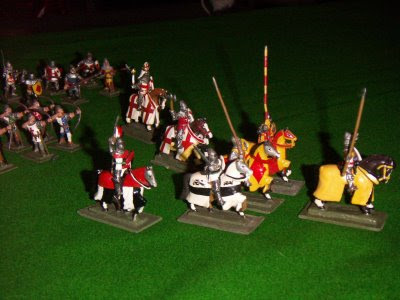 The incredibly dim, Paladin finally realises something is up and sets off to the bridge at the head of a rescue column. The Bishop well to the fore, he is not about to lose a marriage ceremony fee. 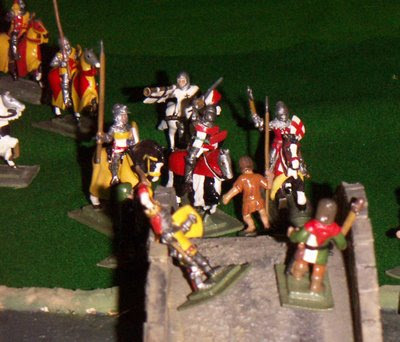 Too late - Otto has anticipated this, and the bridge is held by a defending force, who slow the knights down by throwing a peasant under their hooves. They will never be able to fight their way across in time to catch wily Otto. 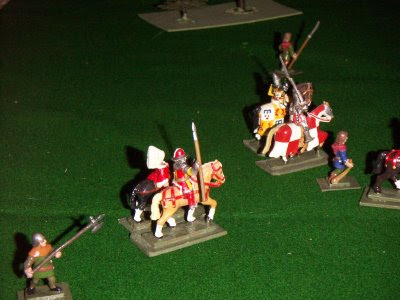 So time to go home, a dowry, the princess and a nice bargaining chip at the next sit down of the big cheeses in Nuremberg. Not a bad days work. 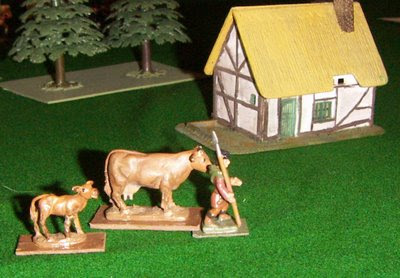 "Honey I'm home! "possibly the biggest winner of the day. The Guide who not only survived but also captured the loose cow and calve and takes them back to his hovel.
So much more that there is no space to detail, the heroic intervention of the captain of the escort which nearly foiled the plot, the peasant scythe man who ripped two men at arms to pieces, the archer with two leg wounds and an arm wound who wouldn't give up. All the fun of this style of game and a refreshing change from the big battalions.
The first time we had played with these rules, which Martin had adapted from a free Internet download. It took a while to learn the subtleties and work out tactics eg. using a figure close to the enemy to slow down movement or in order to kill someone you need to pile in mob handed and really beat the bejaysus out of them. but overall I liked them and certainly proved their is no need to spend £20 to get a good rule set.
And yes I did get my translating done. I refused to give Martin food or drink until the full 123 pages were finished.
Posted by johnpreece at 02:18

Looks and sounds like a fun game! The sort of game where it's hard not to slip into some Pythonisms.

Looks and sounds like a lot of fun,just as the hobby should be.

Reads like it was a great deal of fun indeed.

Great minis, so colourful. Looks like it was a fun game.

Looks like a lovely game, the figures remind me of my first medieval army, Flodden era, all from Hinchcliffe, Heritage and Lamming all those many years ago (where do the years go?).

Knowing of your collection of Les Higins "treasures", I thought you might find the following of interest:

I used some of my old Les Higgins figures in the comparison photos as a demonstration of "scale creep" to the "youngsters" out there. I discovered that the Lancashire Games figures are a very good match size-wise, and they do a Marlburian range. While the style is certainly not up to Higgins standards, they do offer a few figures not available from Les and that you might be able to use to field the "odd" unit here and there. They are quite inexpensive as well, at £1.75 for a pack of 10rankers, command slightly higher. I would ignore their cavalry, as they do not hold a candle to the Higgins mounted range, but some foot may be useful to you.

:-) Yep, looks and sounds like a good enjoyable game was had, I liked the storyline. And i hope that Price Wotsit is going to gallently rescue said Damsel in distress soon.

We hope to have another game later this year, the damsel in distress will not be in distress for long... and yes, it was great fun!!!

Great! A wargame as it should be played -as a game. Where can we find these free rules?