When one considers the venom that I have been provoked in the past by talking about something as innocuous as what colour to undercoat our toys, I tackle the genuinely emotive subject of the Spanish Civil War with some apprehension. 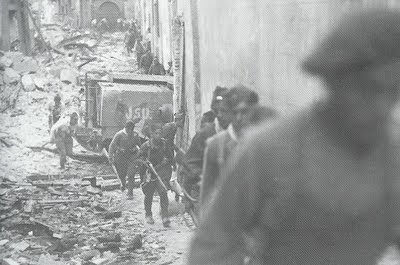 The fascination: is that a Schneider tank at the back of that street? Where could that have come from? 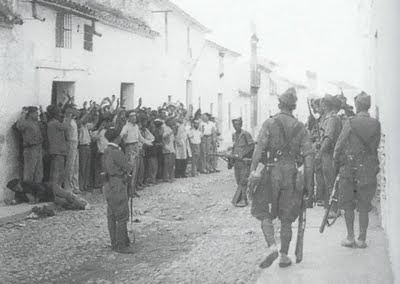 The reality: brutal death in a dusty village.

I have always had deeply ambivalent feelings about wargaming the Spanish Civil War. The attractions of that war as a wargaming period are obvious; colourful armies, new technology, quaint looking vehicles, beautiful scenery. And yet the brutality and tragedy are so immediate, so stark that I feel uncomfortable playing it as a game.
It is undoubtedly sliding into history now and even in Spain where 20 years ago the injuries were too painful to even articulate it is becoming studied, discussed and even gamed. Yet when DC mentions that his father was a member of the international brigade it brings one up short. It was yesterday! 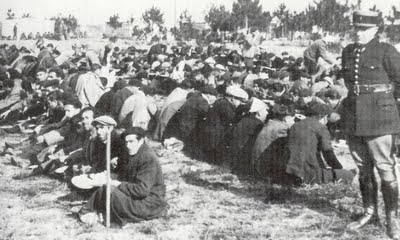 The end of the road for many brigaders. unable to return home they faced years of internment in France and the interest of a Vichy government. Those from Britain and America were luckier in this respect.

Every young man who went to Spain to fight and often die for his beliefs, like DC's father was, simply, a hero. They deserve respect and admiration. Less so in my opinion the party officials and politicians who sent them while maintaining safe sinecures at home, and least of all the thugs who threatened any who tried to tell the truth upon their return. It is possible that as many as 500 were executed by their own side in communist purges. 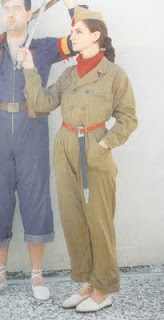 However on my wargames table the little lead men dance to my tune. All Brigaders are heroes, all Milicianas beautiful, all nationalists motivated by patriotism for the old Spain. Heroism and chivalry go hand in hand and when the commissars and Guardia Civile make an appearance they may be booed like pantomime villains in the assurance that they will come to a bad end before the end of the game. Yes, it's 'Charge' and 'The Wargame' for the 20C. I don't know if this makes sense to anyone except me, however as I intend to make a few posts on the subject of The Spanish Civil both in reality and on the tabletop I hope that readers will take this as a sincere declaration of respect for all those caught up in this tragic conflict.

The young lady is a Spanish re enactor and typical of the milicanas to be found on my table. I trust regular readers will not object to my cropping the scruffy Herbert with her. My guess is he is only pretending to be interested in order to hang out with her.

And now for something completely different... 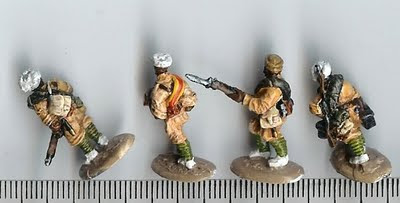 I spoke of Banderas miniatures, however the figures on my last post were all Irregular. This week I have been painting Moors from the Army of Africa. They were in reality a light infantry force and were used as shock troops by the nationalists. They had a reputation for military efficiency and fearful ferocity. 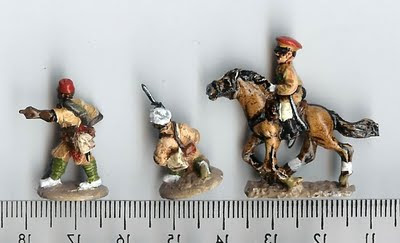 Hi John, those old Dave Allsop figures are great aren't they? I remember an early Richard Marsh article in either Wargames Illustrated or Wargames World, where some of the Moors appeared as French colonial troops. The extra figures Rolf Hedges produced fill the range out nicely. I'm forcibly separated from the lead pile in my loft for the next six months or so and I would love to be able to get at my SCW guys. I think all the Hotspur/Banders ones are painted, but loads of Irregulars to go. They (Irregular) are a bit smaller, aren't they. Good to see the Warrior officer - I remember quite a good chargibg legionnaire but don't remember the rest of the range fondly.

By the way, I don't know if someone is trying to tell me something, but the word verification for this comment is "gonaps". Don't know if this is a command to chage period, time to go to bed, or a spelling mistake.

Well, I just had to leave a comment because the word verification word was "nobler".

I'm not very interested in the SCW, but your take on it is interesting and thought provocking.

thanks for the clarity and sincerity of your post. I was attracted to the period for exactly the same reasons and somewhat put off after reading the original of the two books you wrote about. However as I'm about to play some Russian Civil War games the same is true - attractive equipment and uniforms - brutal reality.

Great article John, very well put. For what it's worth I concur entirely, and i have no problem with others wargaming the war. It has all of the elements that usually attract me to a period but the personal element defeats me every time i consider it (as it does with various WW2 campaigns). I suppose my equivalent to the SCW is the AWI - a very nasty little war at times, but long enough ago that those aspects can be ignored. As you say my whigs and tories dance to my tune and would never dream of lynching anyone.

I'm looking forward to further posts on this topic. cheers.

It's interesting how time heal insofar as I've never met a medieval gamer (for example) who is worried about the execution of prisoners after a battle or the random slaughtering of peasants and civilians. Do TYW gamers worry about the ravaging of central Europe during that time? Do Peninsular War gamners trouble themselves about French revenge attack against the Spanish?

Clearly knowing people who fought in conflicts or had relatives who did makes one pause before using those wars as "entertainment" for oneself. But then again, is watching a war film for entertainment any different?

makes perfect sense to me John. Years ago I posted a request for information about Yugoslav partisans on rgmh. Imagine my surprise when I got an email that began "When I joined the partisans..."

We gain more by celebrating the interesting and good than we do by dwelling on the dark, it is enough to be aware and acknowledge.

Yes it is a Schneider CA1.

The Spanish army bought around 5 from the French in the 1920s.
They were used in Morrocco & the survivors returned to Spain where they were kept at the artillery school in Madrid.

At least one (pictured) was used by the Republican militia at the siege of the Alcazar of Toledo, marked with "JSU", the Socialist Youth movement.

I agree completely with you sentiment. It was from reading and conducting more in-depth background research that I managed to completely put myself off wargaming the Vietnam conflict a few years back.
But I'm glad you've gone back to the Spanish Civil War. I too wargame a somewhat rose-tinted version of the conflict full of dashing heroes and nefarious enemies who end up getting their just deserves.
Ed

Been fascinated for ages - I blame "For Whom the Bell Tolls", "Homage to Catalonia" and "As I Walked Out One Midsummer Morning" for the urge... very very atmospheric...

Having just finished Beevor's latest work on Overlord I'm also tempted to get his updated history of the Spanish War - I sense it might be VERY readable...