Thank you for the interest in this subject.

Jim makes the excellent suggestion that one can get an idea of the effect by standing well away from the screen. I have experimented and this does work although I found I needed to be about 15 feet away in the next room. In order to prevent you having to stand at the bottom of the garden I have posted a smaller image of the figures. This seems to work from about 6-8 feet away.

I should emphasise that this is an experiment I do not envisage using it on my collection of 30m Willie and Stadden figures. However I am optimistic that it might help me put two plastic 20mm nomad horse armies on the table instead of having them on their original sprues for the next 20 years. I am enjoying doing it and I am learning something though I am not sure what yet.

Charles, vin rouge nights are all to few at present so any excuse is welcome. I suppose that afternoons spent lounging in a crowded bar eating rillettes and crusty bread with red wine that could strip chrome are a thing of the past. Where could you get enough cigarette smoke from these days? Failing the authentic ingredients a couple of slices of mothers pride and a bag of hot pork scratchings should give that proper Tabac feel. But where does one get a simple vin de table these days? Everyone has upgraded so much that the old fashioned red plonk is virtually unobtainable, if anyone has any good ideas I would love to know.

Ross makes the point that there is no standard distance to view a figure from. I suppose if one was painting two armies the one likely to be on the far side of the table is not worth investing so much time in. You will note that I am trying these ideas out on the cheapest figures that I can find and on an army I want quickly. My initial thoughts are that it will work best on a simpler uniform late 19c or Marlburian I am unconvinced on how much could be left off say Napoleonics. However it does raise the prospect of having armies that one might not otherwise get round to. Two hat plastic armies might be affordable in every sense of the word.

I will not bore everyone by going into great detail over the painting on black, I am making the same discoveries that everyone else did years ago. I used black because I wanted to base the figures first and I reasoned if I could not reach all the figure with paint it would not matter with black undercoat. I found difficulty in seeing the detail on the figure and judging where the brush point was. I also had trouble covering black with red and needed three coats. I now understand why Games workshop paints are so popular. Mr Asquith suggested dry brushing with white before starting painting and I am trying this on the next lot. I fear that I may have been a bit more heavy handed than he advised, ah well. 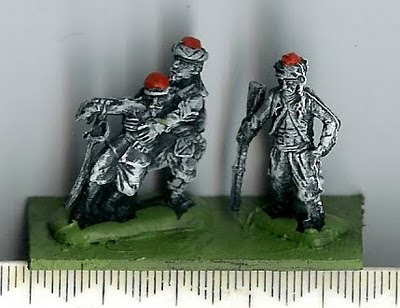 And finally, DC. I am completely in awe of your painting style. It is absolute perfection I should be distraught if I influenced you to change a brush stroke. I rank your work alongside Giles Allison, John Ray and Phil Olley as the very highest standard of figure painting.

Kaboom! John, that's the sound of my head expanding to such a size that it's blown the walls of the house out. Mrs C won't be amused, i'll refer her to you...you poor sod..

Seriously; one crucial difference between myself and those 3 other gents that you mention is that they have 1000s of painted figures, and produce new armies at an alarming rate - i don't, and never have (regardless of painting style), so i think i fail the test. IMHO almost anyone (eyesight and coordination issues aside) can produce 'well painted' (however we assess that) figures if they are prepared to work sufficiently slowly. The crux is that most wargamers aren't as daft as me.

I'm really enjoying this topic, so i hope you have more to say.

Mr Asquith is spot on... black undercoat, dampbrush white (slightly less coverage than you have, but not much less) then a succession of inks rather than paints is my preference...

DC is also spot on - I don't enjoy painting, I only do it so as to put units on the table - when I sit down at the painting table therefore, speed is of the essence before I lose the will to live.. I suspect all of the painters you mention may actually *like* painting - and long may it continue!!!

I actually enjoy painting, except for artillery pieces.

As for reds on top of black undercoat - there are a few other techniques that can help:
1. paint one coat of a red that covers well, like GW's Foundation Paints red.
2. paint one coat of some other light color before the red. I find that colors that contain some white cover better than ones that are oure red or yellow. I'll often use a buff, ivory or similar color between the black basecoat and the red.
3. hgihlight the red with some lighter color and then add a wash of red.

I've not tried the white drybrush before doing the red. Maybe I'll give that a go some day.

you've raised a very interesting point last couple of posts. Do you try and paint an army a certain way (with some consistency) and then discover how they look from some distance on the tabletop. Or...do you paint an army so that they are "recognisable" from a distance on a tabletop?
I guess if you want your figures also to be admired in a cabinet...it's rather obvious. On the other hand, As I stated on my blog, I can't wait another ten years for me to produce large armies, hence the unpainted Airfix on the table. Of course, I would have a moral issue crudely painting a minden casting...it wouldn't do the miniature any justice...and there we go again...But then, the pictures of all those block painted Spencer Smiths in my last post do gave a special "je ne sais quoi" about them...

I'll try and become a follower of your wonderful blog (yes, sometimes my computer has a mind of its own).

Mr Preece
Another interesting subject that you have touched on with your fantastic weblog. I have always found that the figures I undercoated white and painted in the classic style are much brighter on the table but look pretty poor up close.
Black undercoats with dry-brushings, highlights and dark washes look much better on the whole but darken down on the table, it's too much black showing through.
One solution I have found is to paint the rank and file in basic colours with a light wash to pick out the detail and to save the command units as my show pieces which I take more time over. So on the whole the army looks nice and light on the table but the character figures are still nicely detailed.
I think this is touching on the same principles as new camouflages like multi-terrain pattern use. The human eye changes how it sees a colour by contrasting it with it's surroundings and making sense of the dominant light values that it is receiving.
When painting moderns I am always torn between whether to try and recreate the basic pattern of the camouflage, so it will be recognisable but seriously our of scale on the figure, or to go for a "rough feel" and just picking the right colours and daubing them on the figure so that it looks like the real camouflage viewed from a great distance.
And in my experience the sainsburys own label red wine, in the squared off plastic bottle is pretty close. Don't be put off by it's ghastly exterior!
Ed
And I look forward to hearing of your Guerra Civil Espanola encounter