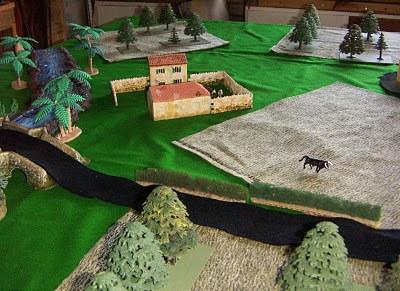 Sometimes one needs to have a game to assess what what work is still needed on a project. When Martyn T. visited last week I put on a Spanish Civil War Game which was really an exercises in identifying the gaps, nevertheless we managed to spend a very pleasant sunny evening playing through a fictitious scenario from Autumn 1936. The Army of Africa is sweeping upwards ever nearer to Madrid, taking one town after another in a premature blitzkrieg. 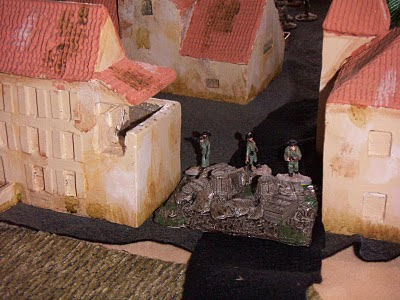 Here at Ciudad del Juguete two companies of Civil Guard and a handful of the local agricultural labourers are prepared to defend the town anticipating that relief will be arriving from the regional capital. 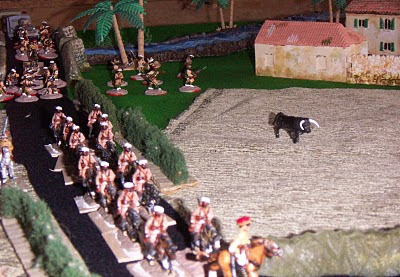 A regt of Moorish cavalry and an infantry Tabor are the first to arrive supported by an armoured car. The cavalry moved around to the further side of the town while the infantry moved into place for a direct assault.
The supporting unit of motorised Foreign Legion advanced down the road but came under fire from militia who ambushed them from the cover of olive groves. The two leading vehicles were damaged and blocked the road to all further use. 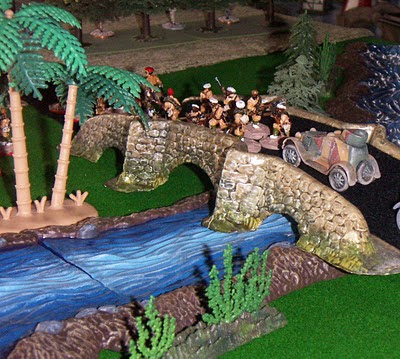 On the far side of the board the Republican column threw a very useful die and began to deploy almost from the start of the game. Advance units of Assault police and an armoured lorry swung straight into the town while buses filled with Anarchists set off down the bypass to take on the moors. 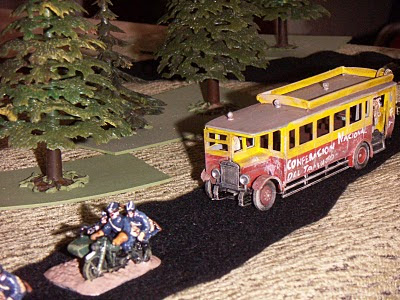 The Assaultos motorcycle combinations are Russian WW2 with a different paint job. The bus is a plastic kit from a railway shop. The Bull came around the neck of a bottle of Torres red wine. 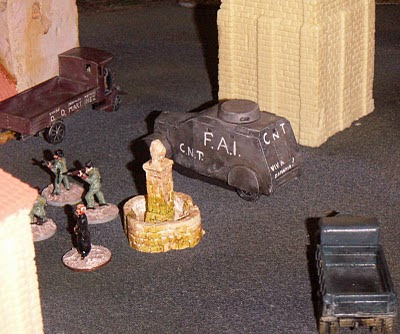 The final picture shows the scene at the end of the afternoon. In the foreground the infantry is about to break through the last resistance on the barricades. The armoured car has been unable to find a way through the defences and has neglected its allocated task of providing fire power to the cavalry who can be seen entering the town on the far side. However it is too little too late. To stand any chance the Nationalists should have been in the town before the column arrived.
Martin had some luck in getting the column so soon and in knocking out two vehicles, however his clever use of ambushes and resistance in depth were the main reasons for a clear cut victory on his part. 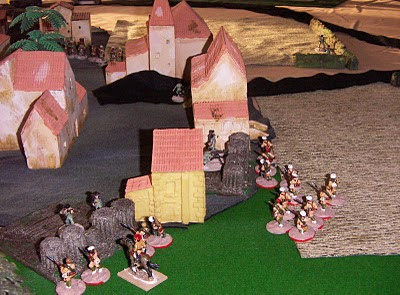 And what did I learn. Masses more basing needed especially for the vehicles. I must make divisions in the storage boxes so that each unit can be lifted out easily without having to check every base and I don't like the coloured line around the base it doesn't help that much and is ugly. I have painted far more basic infantry than I need but support weapons are erratic mainly because I have not based them and I need a whole batch full of transport. Apart from that it's looking pretty good.
The rules were a big chunk of Contemptible Little Armies with some homemade bits nailed on. They worked well on the whole but Artillery needs some work and I need to read up on how a spotter works before wireless communication.
The terrain was simple and deliberately toy like (and I do know that hedges are rare in Southern Spain) but it gave a table that was easy to fight over and still had a little character. With Martin's cheerful cooperation we were able to make a lot of progress and still have an enjoyable game.
Posted by johnpreece at 12:02

Well done that man, it was well worth the wait for another SCW battle report. Inspires me to want to finish off those Basques & machine guns I have sitting in the garage, if only I didn't have so much coursework...

I knew I recognised that bull from somewhere. I suggest laying in a herd.

An enjoyable morning coffee browse. I am glad you gave the credit to the bull, there were all those lovely troops and even more lovely vehicles and the bull held center stage for me. Till the bus came along. Now there would have been a confrontation with interesting possibilities!

Always good to lose a game to someone who did things right.

About pre-wireless artillery check this article by a US volunteer with the Poles in 1919/20 including some really interesting bits on the logistics of field telephone communications and practice vs theory, also some bits on the balance of direct fire support and indirect observed fire. Its from the pygmy wars site. There is a 2nd file with pictures, oddly the picture file gives you the text and vice versa.
http://pygmy-wars.50megs.com/history/eyewitnesses/fibichpictures.pdf

For those who are interested I covered the Miguel Torres Bull's on my Small Scale World blog.

Can you still get them?

(My verification word is moiduck!)

Where did you find that lovely FAI armoured car?

I known RH Models offers one in 20mm with steel wheels, but your model has "proper" wire spoke wheels!