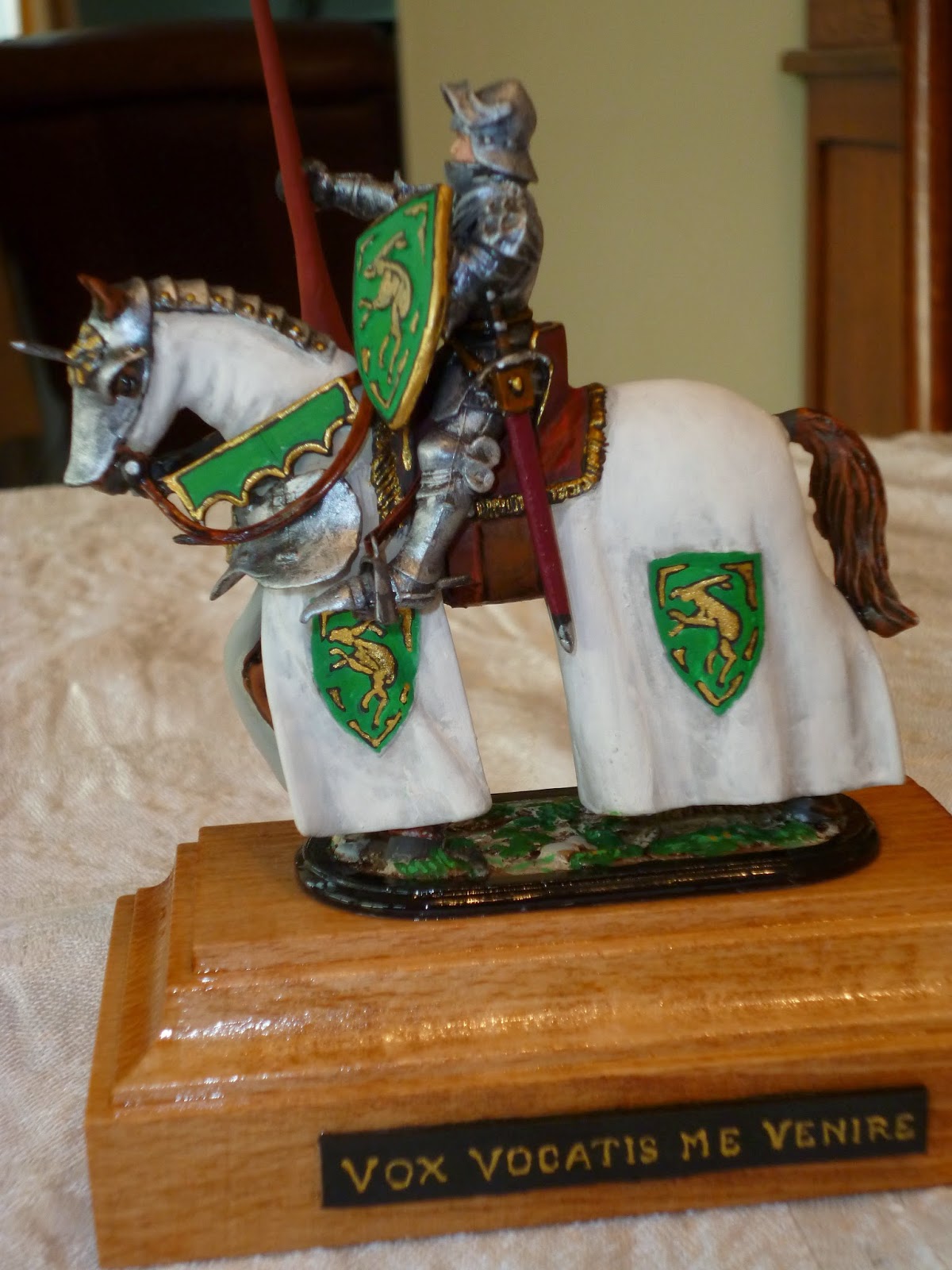 The Serjeant freely admits to being a man of narrow horizons, and nowhere more so than the question of figure size if its not between 20 and 30mm then its damned as contemptible nonsense.
So it was with some surprise that I accepted a commission to paint a 54mm figure.
Mr Peter Johnston of the excellent Spencer Smith Miniatures had arranged  the figure on behalf of a friend who wanted it for a present for his wife. Well I owed Peter a few favours and the money is always nice, anyway how difficult could it be. So I embarked on the first 54mm figure of my life. 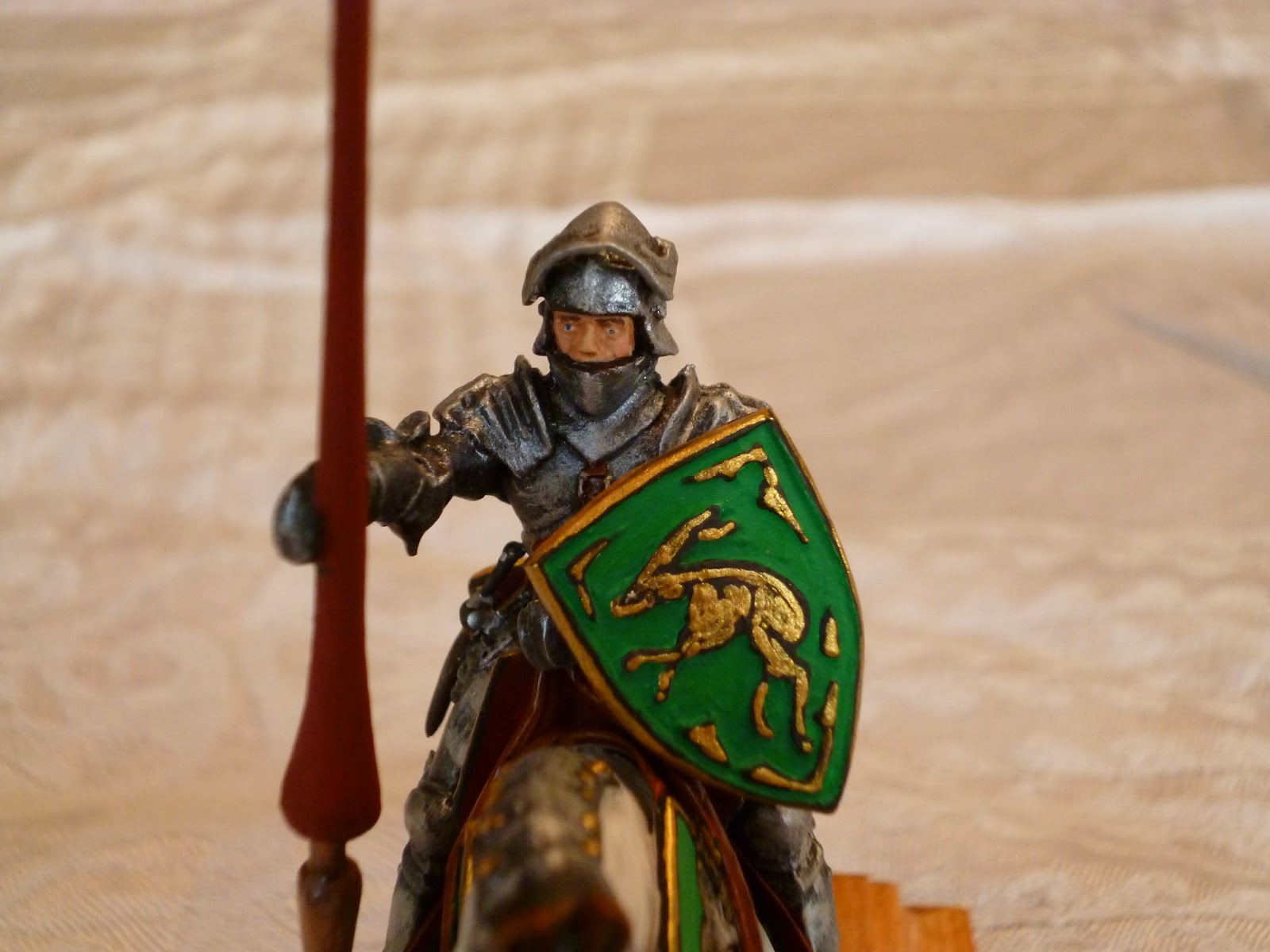 The customer wanted a figure that displayed a hare as its heraldic symbol and had Parsifal in mind as an inspiration. So Knight as idealised hero, no rusty armour or stained clothing but also he did not want it to look like a toy,  and it had to have green in the colour scheme. Peter had sorted him a very nice Tradition figure of a knight in high Gothic armour then it had gone to a figure sculptor to be customised with the stunning Hare added to the shield in Milliput.  Then finally on to me for painting
and the chance to ruin all of the skilful work and money invested so far. No pressure. 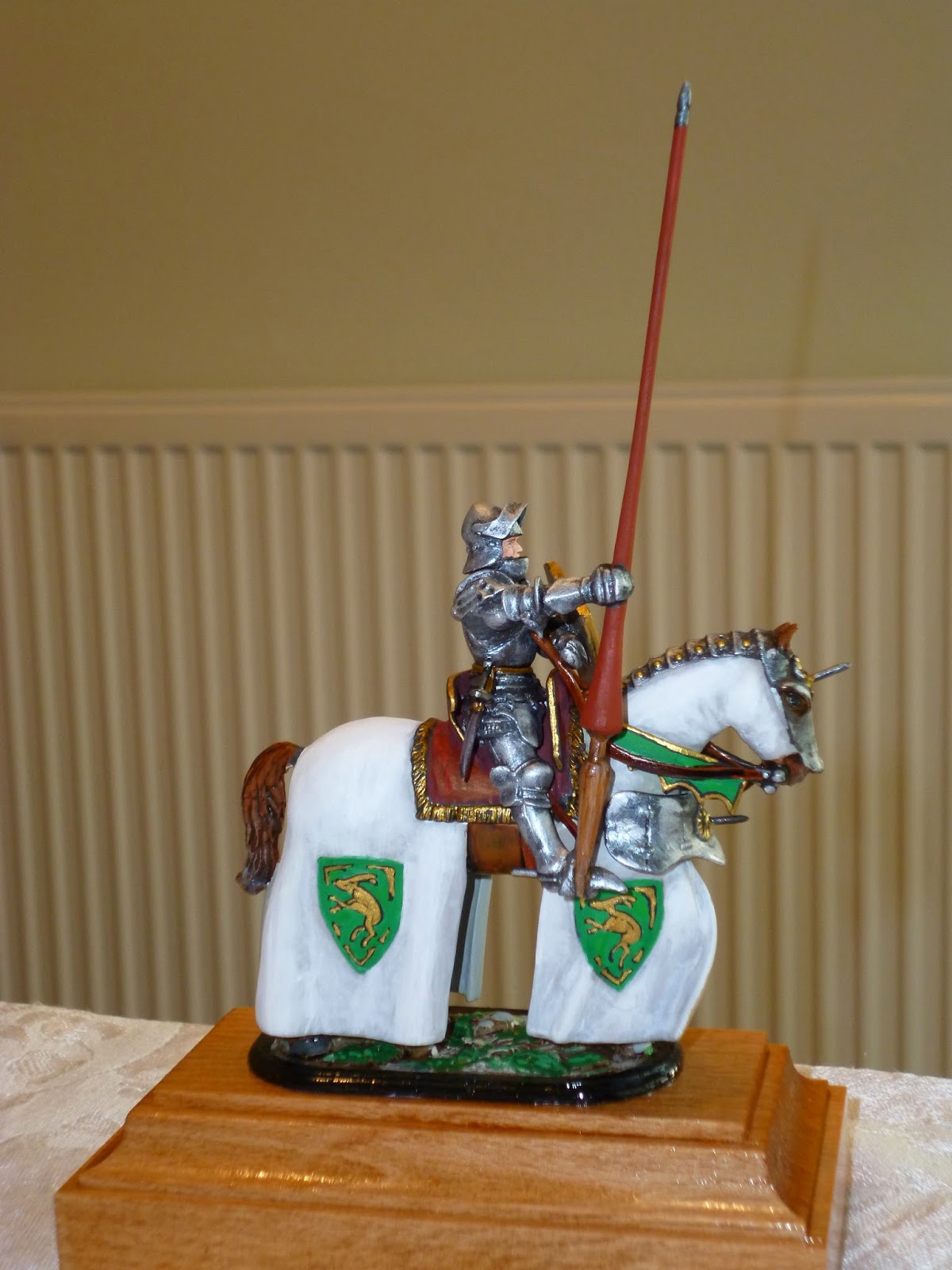 I wont go through all of the work in the two months I had it. We decided on white trappings for the horse which I knew was best but desperately hoped to avoid as the most difficult thing I know to paint. In the end the horse trappings had 16 thin coats just to look white. The other challenge was to reproduce the shield four times each one looking the same. After several grotesque attempts I gave up and photo copied the shield onto thin paper which I soaked in pva and stuck to the casting. I just hope they don't peel off in time. More pva and then paint over to blend in. 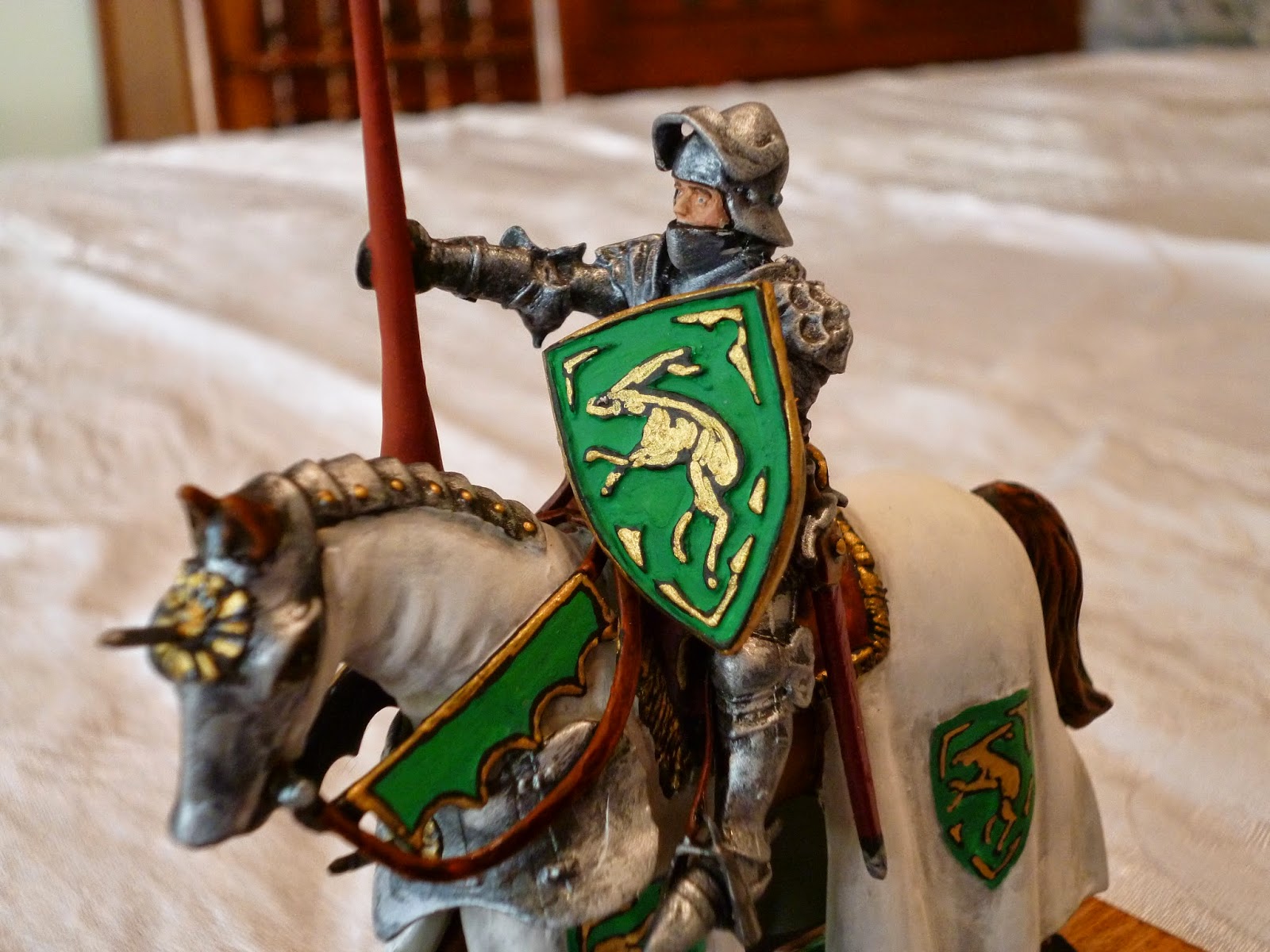 The base and lettering needed a new skill set. I found that I used much finer brushes than on 25mm figures and that my Vallejo paints stepped up to the challenge while those of Games Workshop were simply not good enough. The internet was a Godsend especially the National Armouries website, the Saddle is a direct copy of the war saddle of Henry V.

Overall I enjoyed the experience but I certainly will not be starting a collection of my own anytime soon. Of course I can see things that could be improved but overall I am happy and the customer was delighted and I even finished it in time for him to give it as a gift.
Posted by johnpreece at 03:19

I can understand why the customer was delighted, it's a lovely bit of painting.

I suppose one of the upsides of doing a 54mm of this standard is that one model is sufficient and there's no suggestion that one has to go on to do another five or eleven or whatever identical or similar versions to make a 'unit'.

Nice work John! I make the transcription to be "a voice called to me to come"??

What's this, a classics man?

I do not know a word of latin, but I was told it was 'you called and I came.'

Which made me think of the M R James ghost story of the chap who finds a whistle and blows up a demon. Though since it was for his wife I hope it was a bit less sinister than that.

Wasn't there a famous wargamer whose Mahdist flags bore impressive Arabic legends, which were actually lists of ingredients taken from confectionary wrappers? Can't remember who it was now.