What did you do for the Great War anniversary, Daddy? 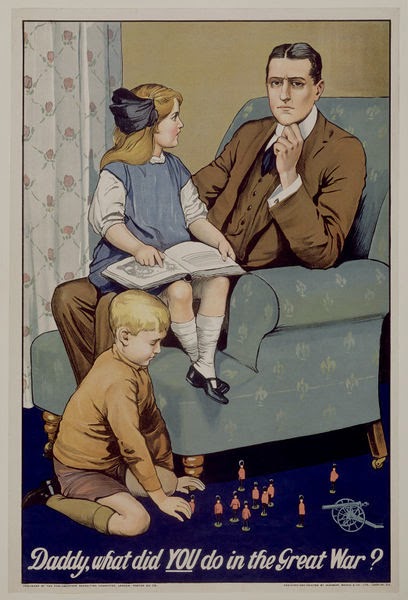 Like the Gentleman above, The Serjeant is pondering his next move.  How to respond to the waves of war anniversary fever that are sweeping the country.

It seems impossible to turn on the TV without Michael Gove or Max Hastings popping up to tell you how beastly the Hun are, and while common sense might insist that it will all be over by Christmas it is hard not to get swept along to the wargames recruiting office by the cheering crowds.

It is not that I am indifferent to the war, far from It like most of my age it was Grandfathers war and seemed at once very real and impossibly far away. One Grandfather served in the pre war Yeomanry as a trumpeter and survived unscathed till the last day of the war when a sniper blew his jaw away, the other lost both legs to a mine in Palestine and worked for the rest of his life squatting on the table as a tailor.  Uncle Jack was a Sergeant who lost an eye when a disgruntled soldier paid off a grudge by using an inspection of rifle barrels to thrust the muzzle into his eye. These were people I knew and talked to.

My main childhood recollection though is of the hordes of little black coated old ladies all spinsters who my mother invariably whispered had  lost their sweetheart in the Great War. Yet none of this seemed to have much to do with the Charlie Chaplin like figures who jerked and jumped about to comical effect on the Great War TV series.

For many years the view was that the War was just too horrible to be turned into a game. But times change and just as people who experienced the siege of Jerusalem or the sack of Magdeburg could be forgiven for overlooking the gaming potential involved so with the passage of time we too are now shaking off the old prejudices.

Now I yield to no man in my admiration of the Olympian disdain of the National Army Museum who finding this and next years Waterloo celebrations simply too vulgar to cope with are shutting down for two years.  Yet I do not think I have the style to carry it off, protestations that I am really much more interested in Montmirail will only result in a regular receipt  of white feathers. 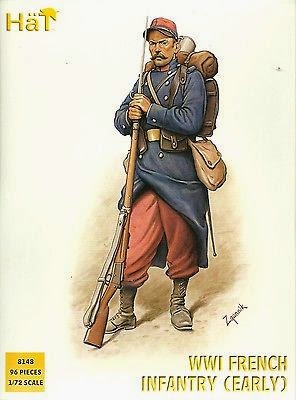 So what to do, well it has to be 1914 and it has to be plastic, after all it is only two more years to the 50th anniversary of the release of the Airfix WW1 set.  And here all the hifaluting ideas come crashing to the ground. We currently have a nation wide shortage of plastic figures for the Great War, or at least Hat's versions.

Well you would wouldn't you? If you were a major manufacturer and WW1 was one of your flagship lines you would think now was the obvious time to remove them from production and leave your retailers with no idea of when they may be re issued.  After scouring the net I have bought what may be the last three boxes of WW1 French in the UK.  If all goes well I shall return with more of he next of the project (assuming I can find some Germans to oppose them).

In the meantime I want to say a personal thank you to every one of my 22 followers who turn in each year for my annual post.

It's about 1.25 posts per year..and worth the wait! Try PSR for a better idea of the WWI stuff available, there is quite a bit...

Haven't entirely banished the urge to go to Dorset for traditional style 54mm toy soldiers like my grandfather had. .

If a black market in plastic figures develops then it could be seen as a faithful commemoration of wartime shortages, but HaT will have difficulty claiming it's down to u-boat activity.

I remember the old ladies too. Thank you for an interesting post, always worth the wait.

I look forward to hearing how the project has unfolded... next year... :o)

I shall watch with interest John, but I must leave you now to pursue another butterfly.

Greg, what's that 5 days? I do believe your concentration span is getting longer.

glad to hear from you again

Good to see you posting again.

I may be mistaken, and you might think me deluded. But I could swear I say you coming out of Tywyn cottage hospital whilst I was sitting out side at a table with my good wife and hospitalized father in-law on a very sunny day in March?

you did indeed, just a routine visit for my wife I would think.
However did you recognise me?

If you are around Tywyn again please drop in for coffee or we could meet up for a beer at one of the many first class hostelries in the town.

I will try and contact you direct but I have no idea if I can send messages through blogger so my email: