Lessons learned - or not

Now here's book that's more often quoted than actually read. Major Robin Scouller of the signals corps might have been deliberately trying to exclude wargamers from his readership. He claimed to exclude from his subject matter tactics, regimental organization, battles, drill, and uniforms. 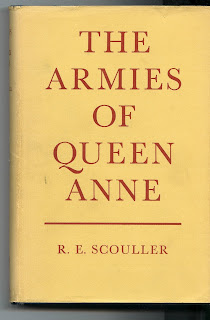 In fact the book was well ahead of its time in that it examined the army in the framework of a state war machine. It is the genius of the author that he manages to make the details of payment recruiting and quartering, and of the doings of the paymaster general and board of ordnance both intelligible and absorbing to the reader.
I must confess it is a book that I dip into a few pages at a time rather than curl up with a mug of cocoa. Nevertheless I always come away with an added insight to the period. 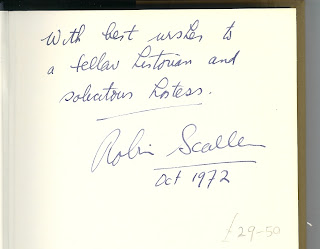 My copy has an inscription from the author, which always makes me smile. I imagine Major Scouller handing the book over after a weekend as a guest. What a surprise for the hostess, who may have been expecting a bunch of daffs or a nice box of Milk Tray, when she opened the wrapping and found a book on 18c logistics! A very tight lipped thank you might have been forthcoming.

I simply have to quote the authors summing up of the condition of the army three hundred years ago:

(Subject to) " the futile meddling of men who knew nothing of the business of fighting; the corruption and inefficiency in every sphere; the penalties inflicted on the honest, efficient, or painstaking; the rewards for the dishonest, the dilettantes, and the inefficient; the irresponsibility of politicians in high places who cast patient officers and humble soldiers on far strands without arms food or medicine or even orders; the miracle of the transformation of the sweepings of the country, recruited hap-hazard and by barely concealed press into an army unsurpassed then or since; the intractability of pettifogging allies; and the resilience of a well-tried enemy. Above, far above it all, however, shines as a glow as of a lighted tower the sheer endurance, patient loyalty and capacity for infinite suffering of the officers and men who stood in the files and squares."
Posted by johnpreece at 12:15