I should really be doing some painting this evening, but I find myself absorbed by the comments people have made on my blog and through direct emails. There is quite a volume of comment of which the following may be given as a typical example.

I have been using Black undercoat for over thirty years now and I have NEVER felt any need to use a bright colour. I may add that my collection of Assassins, Zulus, Ninja and Brunswick Napoleonics has attracted comment wherever it has been seen."
Thank you to 'disgusted of Brighton'.

I actually do realise that some people get excellent results using that system, to me its hard work but if it works for you? What I will always applaud is the individual who works out methods that they are happy with rather than just following the latest trend.

I was pleased to see Ron making this very point, especially since I inadvertently deleted a post he commented on before - sorry! I do sometimes feel that if all those people who wanted to make elaborately painted vignettes just cleared off and became proper military modellers the rest of us could get on with making simple, decent sized armies, perfectly happily on our own.

Steve makes an admirable post to reclaim the middle ground, our armies are what they are, not dioramas and not gaming pieces. Though the hobby is broad enough to happily include those who choose to enjoy either approach. Well perhaps not gaming pieces!!

Whilst in an unusually tolerant mood I should say I have absolutely no quarrel with those who choose to buy their armies ready painted. Whether because of lack of time or they want to possess models beyond their ability to produce themselves. After all Pope Julius never felt the need to grab a ladder and a couple of gallons of dulux when the cistine chapel needed a lick of paint. In fact one of the great pioneers had his armies painted for him, Peter Young was one of the greatest collectors but I do not think he ever painted a figure, certainly in his later years. 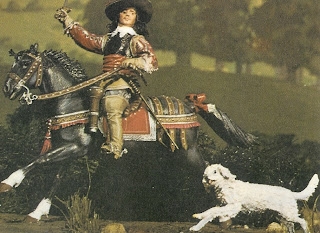 One of the gems of Brigadier Youngs collection:54mm Prince Rupert by the French maker Madame des Fontaines, a uniquely crafted one off model almost certainly created without the pressure of having to finish another dozen for the game on Fri night.
Posted by johnpreece at 13:53

A very nice choice of photo for use with this post. I've got the book it's from -- The Wargame, edited by Brigadier Young if I'm not mistaken. I've always liked the figure of Rupert's the dog 'Ronald' who apparently accompanied the Prince on his campaigns.

Come on, show us more of your own collection of figures and the evidence that a white undercoat is superior to a black one. I'll go and get my sunglasses. ;)

One complication that I have only recently noted with the white undercoats (some of the grey ones also) is the 'brightness' of the reflected colours whenever flash photography is used.

Case in point is a red gun I have recently painted. All the guns were black base coated, then I drybrushed this one white before moving on to red paint and magenta ink, then red ink. At the stage seen.

This is a flash photo and the RED is very bright and highly visible.

Even later, now that the model is finished, in direct light (normal room light) the model looks fine, like an old red painted and dirty gun. But when I recently took a flash shot of it from directly to the side again the BRIGHT RED comes out and really jumps out at you. Not the sort of colouring I wanted, but thought to make note of it here, since the good Serjeant was discussing the matter...

Just because I do things one way doesn't mean that it is any better than what you do . . . both can be completely valid 'right answers'.

What I love about all this is that we have the opportunity to put our own views. Why is that so important to me?

Well in the past wargames had a very limited number of opinion formers who wrote articles for wargames magazines. So they were able to direct us all along the sad path that led to 'heroically proportioned' (malformed gnomes to me) figures.

Ignore Disgusted of Brighton - he's a hack and colour-inner of the lowest order. The only good thing to come out of Brighton is the A23. Back to business, white undercoat and humbrol enamels - it's the future!

Dear Sarge ,
I thought Prince Rupert's dog's name was "Boy" . Ronald ? Did he have a succession of dogs ? Drat ! More research to do !
cordially ,
David Corbett

Yes, Rupert's dog was called Boye and he was killed at Marston Moor in 1644. There's rather a nice portrait that Rupert's sister painted of the dog! The Parliamentarians claimed Boye was Rupert's familiar (on the basis that Rupert frightened them so much he had to be a demon or warlock in league with the devil). There's a famous Parliamentarian cartoon of Rupert hiding in a bean field after Marston Moor while his dog lies dead on the battlefield.

Thanks for this blog ppost