Thank you for the comments 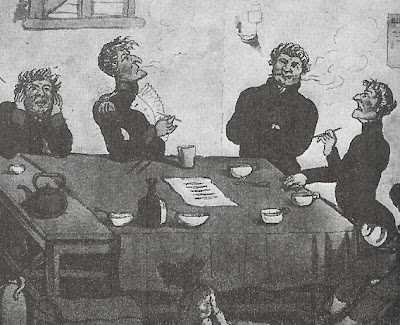 One of the unexpected bonuses from doing this blog has been the pleasure I have gained from the comments people have left after visiting. Some of you I know, others are strangers but every comment has been enjoyed.

Some of the points made demand further discussion so I intend to deal with a few from time to time.

The picture of lord Ligonier, was from Peter Young’s history of the British Army. Ken Trotman has republished Rex Whitworth’s excellent biography should anyone want to know more about this interesting man.

The second volume of CS Grants book is mainly new material especially on Spain Portugal and Italy. The first is essentially an updating of the WRG book. Nevertheless I find it to be a worthwhile purchase.

The excellent advice to go with frontages that look right with the figures has been heeded by me. Much easier to look at the figures in situ and decide.

Finally after much thought I have changed my mind about the battalion size and basing again. As several of you had pointed out I am in danger of loosing the vision I originally had. The main reason not to stick to a 12 man battalion base was difficulty in making a sturdy enough base. All the other reservations are fairly easily over come.
So the answer is make a better base.

I know what will happen if I go with smaller multi bases, no matter what I say people will insist in putting them in columns. Then they will annoy me by asking what percentage of a move it takes to expand their frontage. Far better one big base that they are unable to meddle with.

Oh, and why I am wearing a suit? It’s the only photo I have that looks anything like me.
Posted by johnpreece at 14:38

You look rather like an Oxford Don in your sportcoat and it adds a little dash of class. There was always something appealing about the old wargamers pictures with a Grant or Featherstone wearing a coat and tie. You are simply following the tradition.

I made a rash promise many years back that once my 25mm Jacobite army was complete I'd field it on the table top with me wearing kilt and all the trimmings.

currently the project is a long way from being finished. and likely to remain so.........

One hopes you will not relax standards !
" Not Gods , Englishmen ." - Peachy Carnahan.
cordially ,
David Corbett

Love your own posts here John --- and also the various illustrations. Yes, the tie and sports jacket are indeed a nice touch.