What I bought on my holiday 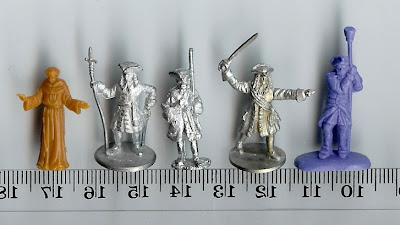 The figures above were picked up during my stay in York. I bought the Irregular Miniatures figure from their stand at the show. I have always liked the uncomplicated approach of Irregular and I think their 20mm figures are quite nice. They would be fine on the same table as Les Higgins though not in the same unit. The range is fairly small though and it may well not be worth the effort of introducing another range just to get a grenadier variation or horse grenadiers. Still nice to know that they are out there.

On the left is a figure from the Pegasus 'Mission Indians' box. Bought for no better reason than that they are the right size and the box title intrigued me, I now have the challenge of how to incorpoate several weaving and sowing Indians, a couple of ox carts and some ethereal looking monks into my armies. Never mind, plastics were made for impulse buyers weren't they?

Finally a potentially much more useful box. From Strelets 'Swedish Artillery' for the Great Northern war. Now this could really be the business since more artillery figures would be very useful. Much cruder in style and a little larger, but the main issue is the somewhat fanciful and energetic posing of the figures. This is more corps de ballet than army corps. Bearing in mind the sensibilities of my readers I have displayed the most sedate pose for their perusal.

Looking at these figures I am reminded of a letter from Brian Marlow of Les Higgins Figures. in Wargamers Newsletter in the early 70's. He responded rather indignantly to an accusation that his figures were to small to mix with Airfix. His figures were PERFECT to mix with airfix, he replied, it was just that Airfix kept making their new packs bigger all the time. Tell us about it, Brian.
Posted by johnpreece at 01:52

I hadn't realised how good Les Higgins was till I saw your photos. I was aware (in times gone by) of the rivalry of the Minifigs and Hinchliffe camps (I was a Hinchliffe follower) and never really gave much thought to other ranges. That seems strange to me now I've seen those figures.

I agree. Living on the west coast of North America (formerly California, now Canada) I had never even heard of Les Higgins.

Looking at these two samples, I really like them . . . are they still being cast by anyone?

Neat looking figures. The Irregular and Les Higgins figures are indeed wonderful castings. What a shame
they aren't just a bit bigger, to go with the 18th century material I've already gathered, and more easily had here in the USA. They are still awfully tempting. . . Funny how the you always want what the other guy has got. ;-) Enjoy them!