A bit of ephemera 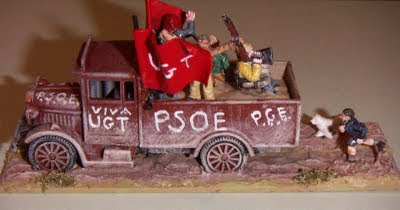 I have always been very bad at adding the finishing touches to my army. I suppose because I enjoy painting but any attempt at even the most basic modelling ends in a welter of glued fingers crumpled paper and swearing. I have over 5000 Napoleonics but very few of them carry flags yet and I have no command stands.
So having hit this months target for painting, (100 Olley points or 200 20m figures) I decided to use the dog days of the month to do a bit of basing and such. 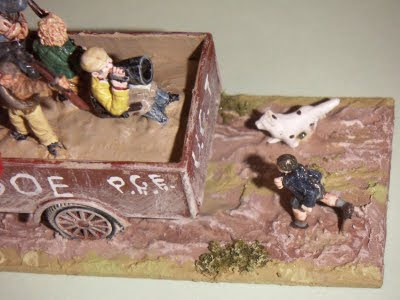 I had started to convert an old petrol tanker from a cheap metal source. You will all have seen these, a metal lorry with snap on plastic superstructure. May have been originally matchbox but most of them were given away with petrol and I picked up a boxful from a dealer for £1 each. I had decided that I wanted a militia lorry calling up support. Maybe getting workers to defend the barricades or maybe a day trip out from Madrid to the front line. 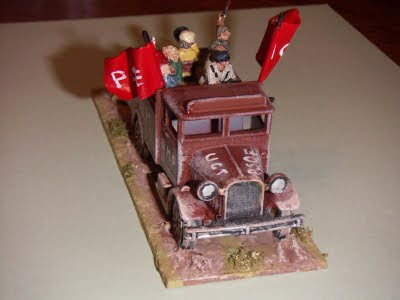 I had a BB miniatures film crew, the cameraman and sound operator were fine for international news but the director was a bit pointless unless I wanted a Soviet film crew, which I don't. So into the back of the truck. I also bought at the same time from BB Heroines of the revolution pack. I was a bit disappointed, having admitted my fantasy senoritas, these looked more like Les Dawson in drag. Most were given away but a couple went into the lorry. Along with a couple of left over Irregulars these were the passengers. I would have liked more but was to mean to take any more from proper units. 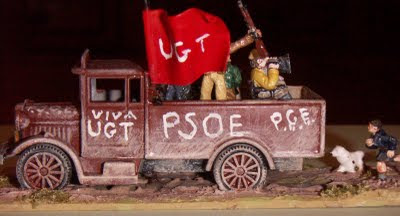 The dog and boy chasing along behind were added and then it was painted and based. Photographs gave plenty of examples of commandeered militia vehicles. Basing was a problem, I was tempted to put the whole thing on a sheet of cobblestones but in the end decided to put it on a dusty road as being the most versatile. The groundwork is tiling grout and is that horrible brown colour. Useful for earth but who would want it in their bathroom? 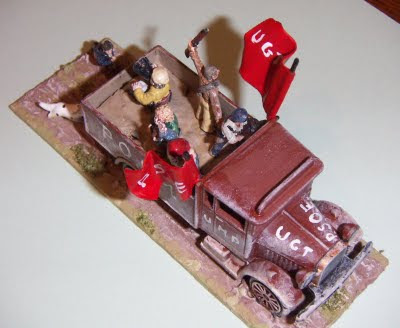 I am playing around with bases at the moment being by nature a contrary old bastard I have decided to dislike the modern fashion for super detailed grit with with a few tufts of state of the art grass on it. I am playing around with minimalist bases. In fact the colour is less intense and much more dusty looking in real life. The flash has saturated the colour image. They are in fact not wading around in a sea of pink dust complete with wave crests. It just looks like that.
I should have taken the pictures outdoors but what are the chances of that on an English Bank Holiday?
And yes the lorry does have a serious use on the table top. I have a coup game planned where seizing vital points in the city releases reinforcements. The lorry will add a number of volunteers each move it drives around the streets.
Posted by johnpreece at 00:36

Nice piece John, i like that a lot. Is the lack of a driver a comment on the republican high command..?

Excellente piece. I just came across some nice 20mm plastic mules in a Pegasus gold miner set. At 1st glance thats 4 mules and some wasted people but then guys in broad brimmed hats with pick and shovel have many uses.
http://www.plasticsoldierreview.com/Review.aspx?id=1727
-Ross

I like it, too! Looks great and nice touch with the boy and dog chasing after. I can almost hear the creaking and clanking of the truck as it bounces along the road...

Very nice piece, and I'm particularly intrigued by your choice of how to use it in the rules. That's very clever.

I have to say, that piece is the dogs nuts. Brilliant.

Lovely vignette, John. I agree that the brown tiling grout is only useful for modellers! Whoever would want THAT colour in their kitchen or bathroom?!
But can you tell me where the film crew came from? You mention BB Miniatures - googling, all I could find was BandB Miniatures and they didn't appear to have a film crew?
My African campaign could do with a film crew so if anyone knows of one (25mm/28mm) please let me know.
PS: how's the "old man's complaint" coming along? Getting better I hope! :-)
Squibzy (captain_squib@yahoo.co.uk)

thanks for the good wishes, my gallstone and I have now gone our seperate ways. So once recovered from the operation all should be well.

Sorry, memory fades. It is of course B and B miniatures. The film crew is cunningly hidden in the French foreign legion range. It is in a fairly large and chunky 20mm size. But still it is 20mm and might look a bit small for 25mm.

You get a cameraman, sound recordest and the director seated in a chair. All in 1920's style clothing.

Another alternative for 20mm used to be the film crew for Subbuteo football game. I am at a loss for 28mm though.

Pulp Miniatures do a very nice film crew. Might need a bit chopping about for the 30's, but very nice set.