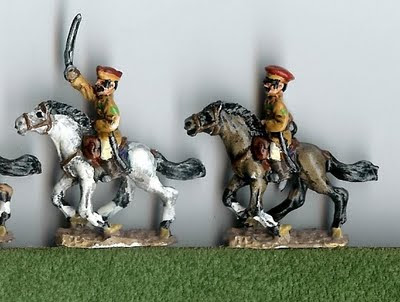 Warrior 20mm : two mounted officers.
One of the nice things about picking up an old project is that a lot of spade work is often already done. I have just finished painting Moorish cavalry and artillery. Together with what I already have that gives me two tabors or battalions of infantry, a cavalry regt, a machine gun battalion and a mountain artillery battery. Altogether about 150 figures and I think we can say that it is finished. In fact I am still looking for some pack mules with suitable C20 loads, ie. ammunition boxes machine guns and artillery parts. Not big baskets, mattresses and other crap that looks like Ali Baba is moving house. 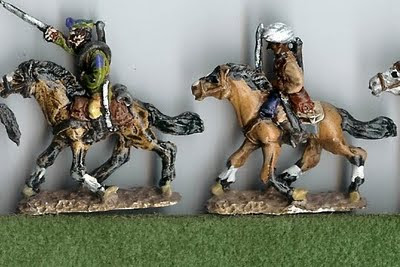 In fact I am finding getting pack animals a pain. They have to be quite small 20mm in order that the mules do not tower over the Irregular horses. They need sensible loads and they ideally should not come with handlers from a completely different army. Any ideas? Oh and cheap would be nice. 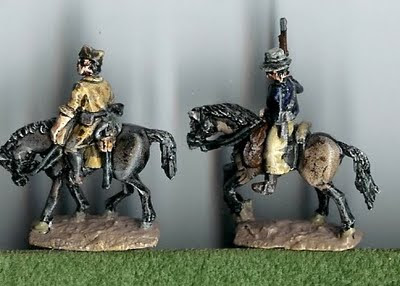 Irregular line cavalry and Falangist militia.
I could also do with a couple of mountain guns and handlers to replace the rather large pieces I have at present. This is not such a problem Jaclex hav an excellent set of six mules in their Indian army range. I guess I will have to flatten the turban a bit but they should be OK. Then I am waiting for Hat to release a Skoda 75mm mountain gun that they have promised. The bonus here is that the Italian crew should be very usable for other gun crews on both sides. 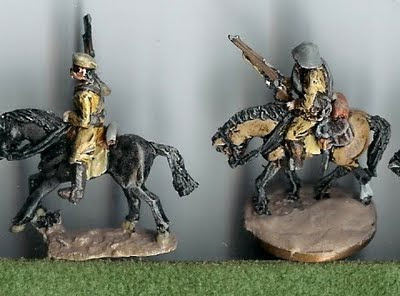 Even compared with ten years ago when I stared this project the amount of plastic stuff around is fantastic. I was looking at the late Robin Hunt's article in Military Modeling yesterday. His armies were WW1French and WW2 Russian with a good smattering of ACW confederates converted into whatever was needed. All Airfix of course. We are spoiled for choice. Which reminds me I need a Imex wagon set to provide a supply cart for the cavalry. 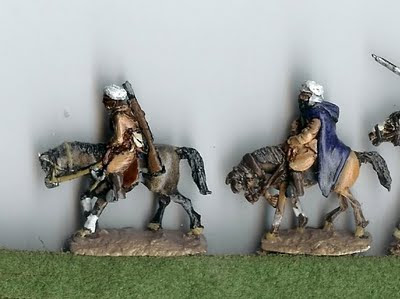 Irregular: Moorish cavalry and a slightly converted Generals bodyguard. (the lance has been removed and arm position changed.)

Well as I was saying almost completely finished! Next up are the International Brigade. I have two battalions mainly done so one more and the British Battalion plus various support bits and pieces. 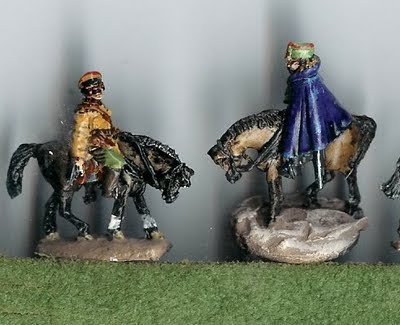 A rather scruffy Irregular officer, which I use as a mounted NCO for the Artillery unit and a splendid senior officer from the same firm.

In the meantime I thought I would put up a few photographs of some of the Cavalry figures that I have used. So far all are either Irregular or Warrior. Unfortunately the Bandera range in the UK does not include cavalry. I hope to get a few of the US additions to the range from Pat Condray in the near future. Irregular are quite nice, very detailed but small 20mm. The Irregular range is over a 100 figures with some variants and I have used a lot. For some reason I have found that the lower code numbers are much better figures that the higher ones.

The Warrior cavalry are quite pleasant figures and very cheap, but as always with Warrior the figures vary enormously in style and detail, some of the infantry are a little, whats the word.. 'strange'?

Unless I'm mistaken aren't there some companies making 18mm figures now (is Eureka one of them)?

Those might have some usable pack animals for you.

(Note that I don't game these smaller scales . . . my eyes are too poor . . . otherwise I would . . . so this suggestion is just from what I've read, not personal experience.)

Sorry, spotted a correction I needed to make.

John, may be a silly answer but what about Irregular themselves? I haven't seen them but they list 20mm mules, pack mules and horses, and have a generic wagon with choice of horse or ox team, all of which might do.The plastic pack horses from the Airfix German Mountain Troops set also comes to mind.

There's a balking pack mule in the Esci/Italeri 1/72 plastic Italian Mountain Troops set as well, with crates on its sides.

Neat looking project you have (just about) finished there, John. Don't know if I've ever mentioned it before, but I really like the "look" of your painting style, regardless of period or figures used. It just has that certain something that makes me want to come back and have a second, third, or fourth look.

John - if you can find the right sized "bare" horses you could make up your own pack animals using the tank stowage packs that the WWII guys use to customise their beasties?? The packs come with ammunition boxes, jerry cans, etc etc. I've used a 15mm pack to make ammunition camels for the Sudan stuff I'm doing...