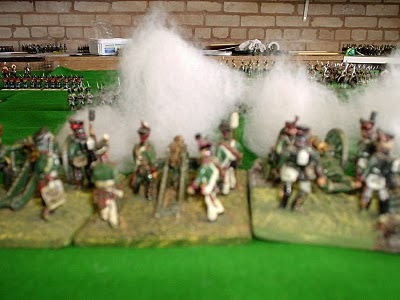 Hinchliffe artillery painted C1976 by Barry Warner, who painted many regiments of Russians for Peter Gilder's holiday center.
About seven years ago I hosted a large Napoleonic game at my house. Of the 3-4,000 figures in use I painted all but a handful myself. All of my figures were carefully shaded, dry brushed and washed in ink and pretty well what I would regard as the best I could do. But I was short of Russians and I dipped into an army I had acquired twenty years or so ago. All were Hinchliffe figures, many of them early period castings and all were competently painted in Humbrol straight from the pot without shading, lining or any other fancy frills.

To my surprise and dismay when the game was underway it was agreed that the antique Hinchliffe figures were the best looking on the table. 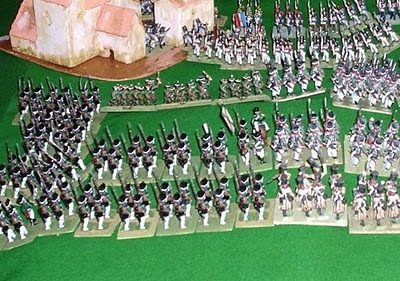 A corps of Russians with some annoying Hinchliffe jager in the centre.

I have reflected on this ever since and the conclusion is inescapable figures that look superb from 18" away do not keep the magic once on the table. Certainly if you are the one that has painted them then memory will supply the missing details to the eye and you will see the subtle beauty, but sadly to others they will be appearing dark and lifeless. Why this is I do not know but I suspect it has something to do with the eye being unable to register the colours and blurring them into a darker whole. I notice at shows that some people attempt to get over this by painting their armies in increasingly bright colours. And good luck to them, it certainly gives some eye catching results. But it never seemed to me to be a complete solution and so I pondered quietly on.

I began to make a little more sense of it when I read an article on the Japanese tradition that by eliminating unnecessary things, more necessary things come to the foreground.

Which brings us neatly to our last post on French artists. You will remember that the things which stood out to the critics of the impressionist movement were that the colours were flat blocks of unshaded colour and that the figures seemed to be unfinished by the standards of the time. However by eliminating all unnecessary detail and shading of colours and conveying only that information that the eye could take in as an impression they were able to create paintings full of light, life and energy.

So what would that look like as a wargames unit? I am not sure but I have had a first stab at applying the principles. Now here we hit the first snag, I cannot show you what the figures look like from five foot away in a good light. I can only show you a scan of them close up. I will try some photos under sunlight if we ever have some but in the meantime.. 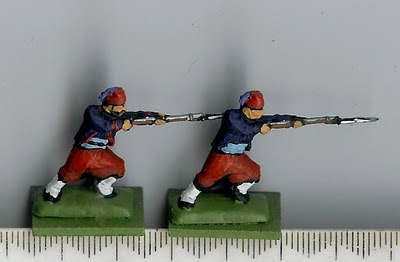 The figure on the left has what I would regard as the absolute minimum detail to convey the 'feeling' of the uniform. However when put on a table four feet away the red on the jacket has long disappeared and the face is distorted by the presence of a beard. The belt across the sash disappears but has the effect of making the sash itself look darker and duller. The figure on the right conveys just as much 'zoooviness' and looks much more vibrant and distinguishable. And yes the figure on the right does look unfinished to me too. I really want to at least put a beard on but I keep reminding myself its supposed to look like its not finished.

I tried to use a bright palette of colours: Maganese blue Coat, Cadium red trousers, GW vomit brown flesh.
I used yellow ochre for the pack and two shades of sky blue for sash and fez tassel. I wonder whether the figure would be cleaner if I kept to only one shade for both areas. The base is a home mixed green of Chrome oxide (Goblin Green) and flesh to give a neutral background.

Looking at those Russian artillerymen i wouldn't have guessed they were not shaded - i guess that's the gloss varnish effect; under decent light a gloss finish provides it's own highlights.

Occasionally i do wonder why i paint the way i do, and you've just set me off again! Personally i think you can easily get away with not shading and detailing much if you put some effort into certain eye-catching areas - the face, headgear, and any lace usually. Gloss finish helps as above. Not what you've said, nor what i do, but i reckon this approach has some merit.

Thanks for making me question what i'm doing...again...you get! 8-)

The 1at is that while the painting is meant to be seen only at a distance, your wargame figures are meant to be handled and. Thus seen at close range as well as across the table. What you need therefore is not the best solution for one or the other but an optimum compromise between the 2. The most simplified solution might work on a large 20mm diorama but less so in a game where the figures are handled.

2. Consider as well the brightening effect of a good gloss varnish. It seems to brighten figures and suggest details and highlights that aren't painted on.

You said "So what would that look like as a wargames unit? I am not sure but I have had a first stab at applying the principles. Now here we hit the first snag, I cannot show you what the figures look like from five foot away in a good light. I can only show you a scan of them close up."

Well to run my test of your picture, I simply got up and walked about six away from my computer monitor (21 inch flat screen). Even in this test, the figure on the right looked much better. And yes, the beard made the left hand figure's face sort of disappear or get muddy.

A simple test for you hypothesis.

Conclusion: A simple paint job is better on the gaming table.

I feel so much better as I can only paint a simple block paint job anyway.

I agree with Ross on the Gloss.

A gloss sealer seems to give depth and make the colors brighter too.

I have switch a high gloss varnish, floor wax actually, for all my figures now.