The Best Range of Wargames Figures, EVER 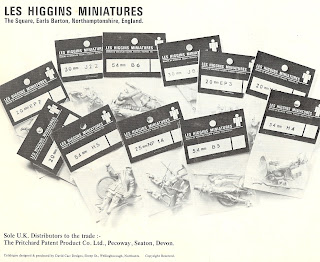 As they say it all depends what you mean by best. For beautiful sculpting and stately pose Charles Stadden was in a class of his own. Peter Gilder could breath animation into his figures and Edward Suren could convey a whole world of meaning in the bend of an elbow or the inclination of a head. Nowadays the Perry twins are not too shabby and Mr Ansell gets better with every figure, his Austrians for TAG are breathtaking.That doesn't even scratch the surface everyone will have a favourite from Dick Higgs to Alec Brown and I can't omit some of the less well known masters; John Ray, John Niblett, and Steve Hezzlwood.

But if you say, which was the most delicate and graceful range produced, which was years ahead of its time in sculpting and production values then I think the name of Les Higgins will always come up amongst the old timers. 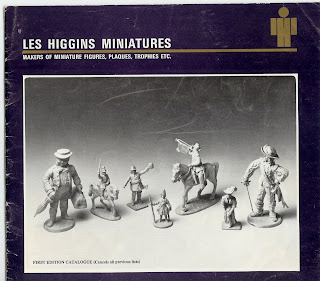 The range of figures was starting to take of when Les Higgins sadly died in 1972. Although many more figures were produced under the Pheonix label the wargames ranges slowly withered away. The jewel of the 20mm castings were the Marlburian range. 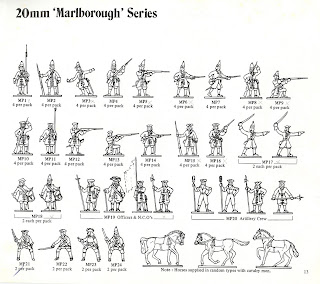 Thanks to the efforts of a group of enthusiasts including the legendary Harry Pearson, this range is back in production. I had vaguely intended to get some but on New Years Eve the opportunity arose to purchase a lot of over 500 original infantry castings.
I dared not pause to consider the sensible options, a quick press on the send button and a new and long coveted army was under production.
Thanks to Steve Gill for the catalogue and for more information Harry Pearsons web site is unrivalled
Posted by johnpreece at 08:56

I am really enjoying your Blog so far and look forward to seeing what you do in 2008!

Glad to see you up and running with this blog thing. Looks like a very interesting start here so far, in paticular the Les Higgins material. I'm eager to read more as you add posts on various topics.

Interesting to hear that the Les Higgins figures are back in production. I remember playing a couple of Marlburian games with them when I first started wargaming many years ago. I've always considered them as one of the most elegant sets of figures. I wonder if they are compatible with the Strelets and Zvesda figures I've started using for the WSS.

Keep up the good work

Thank you all for the comments, much appreciated.

I hope to look at plastic later and check out how far they mix in. I would think that the lovely Zvesda figures would be a match in elegant style at least.

I have quite a few Strelets Crimean boxes. Interestingly they mix very well with the original S range minifigs made by Dick Higgs all those years ago.

Those are beautiful little figures. That woman in the catalog pulling up her stocking could be useful. Wonder where I could find one of those.

Great job on the blog so far. I can only look at it in the evenings because my evil IT at work has put a block on nearly everything.

Hi, fellow enthusiasts!
Unfortunately, I´m not at all into 1700´s and 1800´s, despite having "Our" Great nordic War and Napoelonic involvement. But he, and later on; Phoenix Model Developments ..made the most beautiful "true 25 mm" Ancients range..which (appearently the molds haven´t been located??)..isn´t part of the release-programme of the crew behind the Vintage 20 Mil-site.
I´d be grateful for ANY snippet of info. with regards to this range.

Can't argue with that John I'm a Higgins fan from way back before I could acrtually afford any. However my personal favorites were and are the 30mm Jason range of which I now own a measly 40 or so mostly ECW but always on the lookout for more I also liked his 54mm stuff (I own 2)and of the other older makers like Stadden - again 30mm and of course Ted Suren .
When it comes to the moderns aside from the Perrys I'd put the American Chris Hughes in amongst the top boys with his Sash and Saber stuff and latterly the Old Glory 2nd Edition ACW which really do remind me of Staddens work - for me they are Chris best
Mind you there were never many who could hold a candle to les Higgins and being skint (and stupid) I sold my 20mm Malburians some 20 years ago now of course I want 'em back ..... but I'd prefer some Jasons instead. Ah well I can dream.

can we have a look at them mate?