Enough with the memory lane, already.

With the painting of units of 30mm Staddens and Holgar Eriksson and, especially re staging the battles of Mollwitz and Sittangbad, I have finally got the nostalgia bug out of my system. No need for big battalions or using Charge rules for every army. I am free to start with a clean slate. 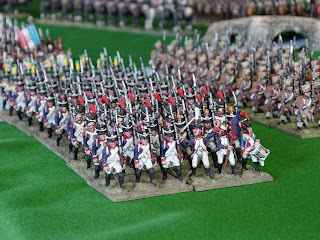 Big Battalions - finally out of my system?

So, it was Charles Grant (alright, almost a clean slate) who used to advise that the best way to do an historical refight was to work out the space you had available and put the number of units that fitted comfortably into that area on the table. He was less keen on starting with an order of battle and listing all the units the trying to build the game around them. If you have followed that, I would say I tend to agree with him.

But why not extend that principle to a logical conclusion and use it to underpin the planning of an army? My table is 12' long, the two main battles of Ramillies and Blenheim both took place on a frontage of four miles. If I want to play those games 3 feet will equal a mile and speaking roughly 50yds will equal one inch.

Then if an average battalion is of 600 men in 3 lines they will occupy a space 4" long. My figure scale will be determined by the number of figures that will fit in that space. The figures are 20mm but on fairly big circular bases, I think of 15mm though I don't have any to check yet, never mind lets just assume 6 will fit. Except that I can't abide one rank deep units so we will say "Sod off" to Mr Constant Scale and model a battalion as 12 figures formed 6x2 on a 4"x1 1/2" base.

At this point two observations may occur to the attentive reader: " What, no big battalions no single figures, surely this is far from Old School. Indeed if you must use this Modernist mish mash why not go the whole hog and use the excellent 6 and 10mm figures now available?"

In reply to the first point, I will attempt to illustrate in future posts that these ideas are derived from the early writings on Wargames just as much as is any 60 man Spencer Smith unit. The second point? Have you not been reading a word I wrote? I like 20mm figures.

Cavalry? well lets not do everything at once. In the next post I may work out how to base the basic units of cavalry manoeuvre and organisation.I shall also need to consider very soon the wise thoughts ofMr Phil Olley on how to make a project such as this succeed.

What? No BIG battalions of SSM or HE figures? That's scary stuff! Seriously though, this sounds like the start of something interesting. Looking forward to reading about the cavalry next.

Loved the Napoleonics at the top of your latest post -- it's what I pictured in my mind's eye for many years, but never achieved to my satisfaction. Well done!

There's certainly plenty of tradition behind the 12-man battalion as well. I look forward to seeing what develops!

...my AWI project uses 12 man battalions of 2 x 6, but even so your thought processes are also "dangerously" similar to those of Peter Gilder.. :o)

In the Wargames World articles he wrote at the beginning of his Sudan project he too was fitting units to space rather than scale.... quote "I standardise the organisation to function within the particular rules I'm going to use"....

Stokes is right - this project is sounding interesting...

Very interesting posts and a lovely blog, John. Looking forward to following it.

Very nice John, and thanks for the link. Like your style..'Im doing it this way cos I want to, and here's why'..And why not eh. Will follow it with interest.