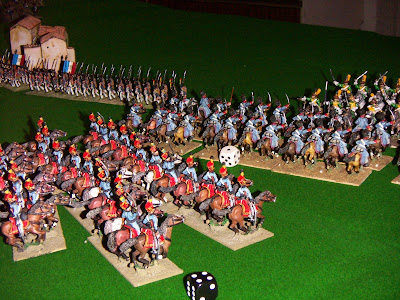 Allied cavalry attack the French flank in a typical 1813 game.
Figures by Elite, Front Rank and Garrison
About 15 years ago I undertook to contribute a few figures to a planned Napoleonic game, 6000 painted 25mm figures later I am still only scratching the surface. I am sure my enthusiasm for this period will last as long as I do. All the same my output has dropped off over the last few years and I am feeling the need of a sabbatical. 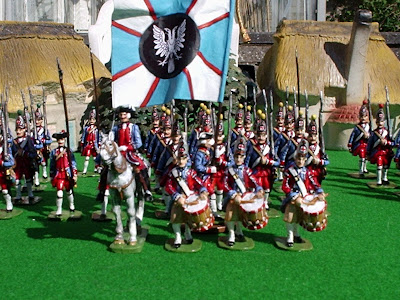 The biggest influence on my gaming in recent years has been the Old School Wargaming group run by Patrick Lewis. This yahoo group reawakened my interest in classic figures and rules and led to several new friendships and two memorable demonstration games at Newark in 2006 and 2007. These recreated the wonderful battles from 'Charge' byBrig. Peter Young and 'The Wargame' by Charles Grant.

I have had great fun with large regiments of singly based 30mm figures, but this has been at the risk of neglecting other ideas of the early wargames writers. I want to use my new project to look at less popular rules and writers such as Joe Morschauser and Neil Cogswill.

Just a memory concerning cavalry "charging in the flank": many years ago my wife at I were at the much lamented Rotal Tournament and the Household Cavalry were doing the "crossover" manoeuvre in their musical ride when it went wrong. One rider hit another at 90 degrees: note, this was not at the "charge" but at a brisk trot. The rider hit was thrown and taken from the arena unconscious as I remember: his horse had to be destroyed (in the arena). The rider whose mount hit took off, somesaulted and (I think) suffered a broken arm: his mount survived but was unrideable. I don't know how you reflect that lot on the table, but that was heavy cavalry in real life.