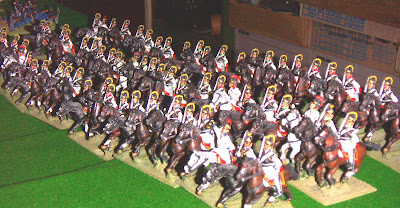 What then to do with the tiny metal horsemen?

The frontage of a squadron has remained remarkably consistent, no matter what name has been given. As I understand it the reason for this is a line of horses much in excess of 60 or 70 will tend to bunch so that the middle horse are actually lifted off their feet.

Disregarding ranks deep for the moment we can say that a squadron will fit in 100 yds. Marlborough paired up his squadrons which means that we could legitimately put two together on a base which would, at 200 yds, have exactly the same frontage as an infantry battalion ie 4". Now you must understand, I cut my teeth on WRG 5th when combats were decided by 13 figs @ 4 +2 and 7 figs @ 3 +1 versus 9 @ 7-2(facing LTS) and 12 (+6@1/2 effect) @4 -1. Plus the difference of four individual dice throws. As a result having unit frontages match up exactly like that is a balm on old scars.

I still do not have the figures in my hand yet but I suspect that a horseman will need a frontage of 20mm, so that 5 will fit upon the 4" base. I do not require that cavalry and infantry should have exactly the same figure ratio so long as it is somewhere close. In this case it would be about 50-1 for infantry and 60-1 for cavalry. Another result!

The only tiny flaw is that a lot of units had 3 or even 5 squadrons, so if I have five figures to a base I can't split it in half and will have to round all units to the nearest 2 squadrons. Its nothing, a mere detail and yet it nags away at me. What if I expand the bases from 4"(100mm) to 120mm, then I could get six on a base and I could half the base size to allow movement in column or more flexible manoeuvre. That would mean increasing the infantry from 12 to 16 man units. Certainly they would look better at that size and it would help each unit to justify having its own flag.

The problems caused by this would result a four mile frontage would require an extra three feet of table, that's not really an issue (he said, odiously) though it could start tomake depth a bit of an issue. More important would be a 25% increase in cost and painting time required - but it would look nicer!! (curse you Alte Fritz! sowing the seeds of dissatisfaction.)

I could put everybody onto 60mm bases but actually I don't see the point of that for infantry. I think the first quarter of the 18c was just about the only period when columns were never used. I don't think I will ever want to put the foot in anything except a linear formation, so why split the bases down? Just stick the whole unit on one 120mm long base.

Oh dear, it all seemed so clear. Another long walk with the dog over the marshes is called for to mull this over.
Posted by johnpreece at 15:10

Ah, WRG. . . Well, if one must have "problems", I suppose the kind you describe are pretty good ones to experience. Eager to see how you reconcile things.

All the battle descriptions I've read talk about squadrons of horse and rarely regiments - that's left to the historians writing later secondary accounts it seems. It also doesn't appear too uncommon to have regiments of horse split to provide squadrons in different parts of the field.
The upshot is in my opinion that horse units and their basing needs to be more flexible than the infantry. Except where or if you want to detach grenadiers to carry out actions like the Schellenberg of course.

...and you might still want the extra flexibility for your infantry if you want to ..

1/. ..use column of march to get round the battlefield quickly?? Yes, I know you could just move the "line" of troops as if they were in column - but it wouldn't look right, would it? :o)

2/. ..deploy with a refused flank ie. deployed in a dog leg in order to conform to a wall or other structure etc.? To allow the battlion to split their fire?

I chose this so I can regulate movement and firing using terrain hexes that are 100mm across flats.

I feel for you John. Sometimes the more we think about a project the more confusion reigns. As Phil Olley has so astutely pointed out, some times we have to be careful that all the stimulating ideas out there don't distract us from the task at hand. I've personally had several projects stall or be derailed entirely by the "good ideas" of another. I thought your initial plan sounded pretty good, and distinctly different from what everybody else seems to be doing. I'm looking forward to seeing how you progress.

Perplexing isnt it? I am not unfortunately experienced enough to help you with your basing and painting. Your blog is coming on well John.

Thanks for the link. I have added a link to your blog too.
Thanks

Hold firm Sarge. When doing a battle of this size, let the Majors and Sergeants-Major worry about battalion drill and concentrate on moving Brigades and larger formations. 1 stand per battalion or double squadron, you'll thank yourself when doing combat resolution. Equal frontage as per Morschauser will solve many mechanics issues. once several dozen such units are fielded, the problems of individual battalions will fade away....

Perhaps my opinion in this matter is silly . . . but why not wait until you have some figures in hand and see just how much frontage they need?

Personally I'm planning on doing a 15mm WSS project (centered in the South -- Italy and Spain). Now what I've done is to get some figures and tack them down on various size stands to see what they look like.

I want a certain look to my intervals, etc. So, being somewhat pragmatic, I got some figures and based them up in my different options.

I suggest that you get some of your Les Higgins 20s and do the same . . . base them the way that LOOKS right to you . . . then worry about how you might scale a battle up or down.

How to totally waste an hour that should have been spent painting Austrian Hussars...Now I appreciate that for me painting hussars is about as pleasurable as a visit to the dentist, however they need to be done. Your blog has just set me back again as it is now time to take the cadet off to school and then do the DIY I am supposed to be doing today. After that Montmorency the labrador will need his exercise and then I will have another task thrust my way by the general. The Hussars will have to wait a while!
Damn this blog, I am never going to read it again, well not until next time anyway.