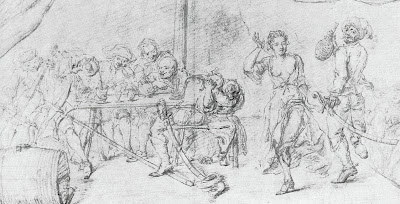 'In Flanders a Market Tent in Camp'.
The sketch is done in graphite on paper and is signed and inscribed
Done in Flanders in the year 1707, the year I went into the army.

The above drawing from the Courtald Institute is often reproduced in books about Marlboroughs Armies. To me it seems almost uniquely authentic and I have often wondered who the artist was. Thanks to exhaustive research (ten minutes googling) I am able to add a little to the sketch.

Marcellus Laroon the younger was the son of a dutch painter. He travelled in France and Italy before coming to London in his early twenties and working as an actor and accomplished singer at Drury Lane theatre. He then entered the British army and served in Flanders from 1707 reaching the rank of Captain. Marcellus must have been captured at some point because he was exchanged as a prisoner of war in 1712. He remained as an half pay officer until 1732, while working in the academy of the great portrait painter Sir Godfrey Kneller. For the rest of his long life he turned to painting for pleasure. Of a convivial nature, his friends were drawn largely from London's artistic, theatrical and musical community 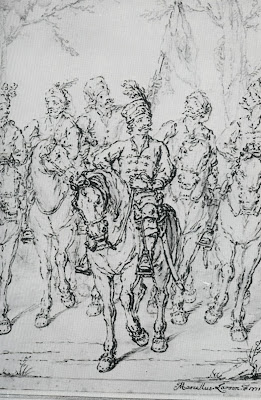 Obviously Austrian Hussars, but the sketch is dated 1771, how far back in a long memory was he going? or is that the date the print was published? 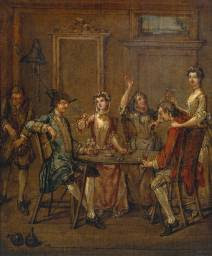 His mature style shows friends relaxing, one feels Marcellus might have been a decent sort to share a pint with.
Posted by johnpreece at 11:41

I am always interested to see new material from the 18th C: this is an artist that I'd never heard of. The first picture - as so often seems to occur - put me in mind of Suren figures.

What lovely illustrations and neat history behind them.