Thinking about the horsies 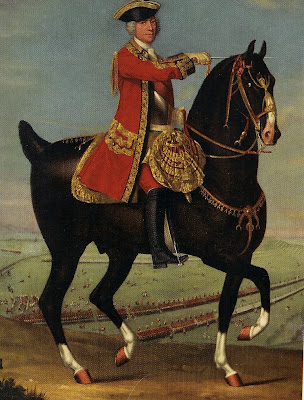 Morier's painting of Earl Ligonier in 1747 admirably shows the heavily
built black troop horse in its glory.note the severely docked tail.
Cavalry mounts always have a tension between the desire for the biggest horses possible to sweep all before them and the general rule that the larger the horse the less well it stands fatigue and privation.

The original English Cavalry horse at the beginning of the 17C was the Great Black which stood at 16 hands. JamesI and CharlesI imported Arab Stallions through which the breed was altered under Charles II. The heavy Lanarkshire black breed and the importation of black Flemish stallions particularly by William III meant that by the beginning of the 18c the Black Horse was the standard English war horse coming in at about 15 hands.

However the ideal was not always met even in peace time as this advertisement from 1677 shows,"Stolen near Paddington, three geldings belonging to His Majesties Guards all between 15 and 16 hands. One dark grey, another dark brown, the other an old dark bay, blind in one eye flat footed and long legged.

By the end of the first decade of the 18c the number of dragoons employed had increased dramatically. In England from 7 to 18 regts, in Russia from 1 to 24, and in France from 14 to 43. In the same period the Dragoons increasingly dropped their role as mounted infantry and were expected to function as battle line cavalry, albeit 2nd rate. The cheaper cost of maintaining a dragoon is often seen as the main force for change, a troopers horse cost about £15 while a dragoons could be purchased for as little as a third of this. However the difficulty in maintaining a supply of horse of the size needed for cavalry troopers must have made it very tempting to raise mounted regiments from the lesser sized and often tougher breeds more widely available.

When it comes to painting the horses I shall follow the general rule that proper cavalry has black horses and Dragoons have a mixture of chestnut and bay. Unless of course we have specific information to the contrary.I am not sure what I will do about British horses tails, Cadogan insisted upon a brutal docking within three inches of the root. However I am as reluctant to mutilate my lovely Les Higgins castings as I would be with the real thing.
Posted by johnpreece at 14:18

Hi John,
How are you? Like the blog. Coming on really nicely. You know your history. Something I need to brush up on. Will definitely be coming back to read your blog as often as possible.

On another note, would you like to exchange links with my blog?

And so begins that classic 18th century dilemma of reality versus collecting practicalities...

Personally, I wouldn't mutliate the castings. In this scale, what does a docked tail really look like anyway? But of course it's up to you and the exact requirements you have for yourt army. Painting horses for cavalry units is always a problem, compounded by the fact thnat we don't really know whether each squadron had it's own horse colour etc. Why not "go black" bu throw in a couple of squadrons with bays and chestnuts?

John: terrific picture of Lord Ligonier. Perhaps you could tell me where you got it (EA) as I could foresee wanting to use it on my blog one day.

I can never bring myself to dock the horses' tails, even though I know that they did it.

Thanks John - I'd not heard of Ligonier before, but went away to do some digging.. another fascinating character from that period of history! Wiki says he was colonel of the 7th Dragoon Guards for the better part of 30 years, and they known at the time as the "The Black Horse"... I wondered if the fact that they were called that implied that black was an unusual horse colour, but apparently the nickname comes from the colour of their facings! (At which point I realised this is the same regiment I know as Schomberg's in my own forces :o) )

By the by, and probably apocraphyl, but Wiki also tells me that "He spent his later years at Cobham Park in Cobham Surrey, where the unmarried Earl boasted a harem of young girls".. no one can say that the main men in those days weren't bigger than life!!

John et al
Docked tails are the triangular stump as shown in the picture, the hair is shaved right back, If I remember correctly until the mid seventies this was still done to the drum horses of the mounted bandsmen, as well as to a number of dray horses, Then they moved on to allowing the docked tail to grow the hair but this was cut short and square ended, Since Drum and dray horses live long lives it is only now that they are being replaced with properly tailed ones.
Graham