So at the end of the day I look back in contemplative meditation.

Reading around a project is one of the great pleasures of the hobby. Indeed over time one can gather a fairly respectable personal library of enjoyable texts. The last time I was building a Marlburian army I was travelling twice a week up to London and the train provided plenty of time for background reading. Since I also had a day a month in Oxford I picked up quite a few classic texts during that year.

Coming back to it after 20 years or so it is interesting to look around and see what has been published in the meantime. Since the begining of the month I have purchased two books by James Falkner and the Osprey on Blenheim. (God bless ebay and the January dip in prices).I hope in time to enjoy reading these and when I do I will write about them here. Hopefully I shall have the energy to revisit the existing library this year, as well. 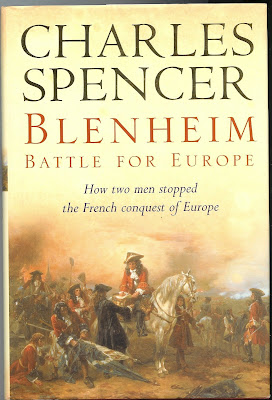 But I have begun by reading a book for which I had no great expectations.

In fact it was a gentle easing back into the period and though in no sense ground breaking it covered the period fairly well. It puts Louis 14 at the centre of the book and gives a good overview of his foreign policy. Indeed by the time it has dealt with the early life and marraige of the Duke of Marlborough it has only 60 pages to deal with the battle.

Charles Spencer has read the modern studies of the period and at times these chunks of knowledge are pulled in with the brutality of an undergraduate essay. The style is unremmitingly readable but to be honest I have no problem with popular history, I wish there was more of it. If at times it reads a bit like The Giant of the Grand Siecle meets Blue Peter then so what, at least I finished it.

From that I turned to another work of readable history: He states " For my part, I cannot abandon the older ideal of History that was once popular in England, that the same book should make its appeal both to the general reader and the historical student".
Well said, George, I am looking forward to relishing rereading these books a few chapters at a time over the next year, perfect for a deckchair on a summers evening.

"The darkness fell and the scene was blotted out. And with the darkness, sheets of rain descended in pitiless brutality on the maimed and dying men gathered from all the four corners of Europe to perish together on that tragic hill."
Posted by johnpreece at 14:43

...fantastic - I'm treading pretty much exactly the same reading path on my Marlburian project... just a little different time scales.. nice to know I'm on the right track! I would say the Spencer was a significant factor in my starting the Marlburian project - immensely readable, and kind of Trevelyan'ish in it's ability to not alienate the casual reader; not heavy on detail but able to gives a good feel for the period....

I would recommend Falkner (when you get to him) for the same reason, he has more (miltary) detail but he's very, very readable.....

Last, based on a recommendation on GrimsbyMariners blog I purchased and received that very volume of Trevelyan yesterday.... :o))

Looks very interesting. Yes, the incidental reading that inevitably goes along with any particular wargaming endeavor is a joy too often overlooked. Just received a copy of Chandler's The Art of War in the Age of Marlborough this afternoon and cannot wait to curl up with it at bedtime to start reading.

Saw Charles Spencer give a very competant and entertaining talk on this book at the Windsor festival a couple of years ago. In almost his opening remark he made clear that it was not a detailed military study and there were far better qualified writers such as Chandler. You could almost hear the groans from the retired military in the audience and the sigh of relief from the female entourage who had turned up to see him in his capacity of Princess Diana's brother.