Why they are a lot more scary in real life 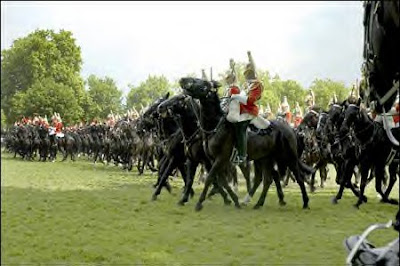 Probably taken at about 5.am in Hyde park on a summer morning, the Household Cavalry at the canter. The horses used to imported from Ireland but are mainly from Sweden now. They are 15-16 hands high and reasonably close in appearance to the war horses of the past though lighter legged.

Even in 25mm a lead horse is not very imposing, but when you stand next to these they are huge! When the rider in his helmet and god like uniform is added they are imposing beyond belief. Just one horse is a ton and a half of malicious muscle heading straight at you at 20 miles an hour.
I suppose there is about a half squadron or so here. Two points of relevance to the wargames table occur to me. Firstly any infantry not in close order have not got a chance in hell, no point in writing rules just take them off the board. Secondly how do you control this lot? Yes I know cavalry can manoeuvre, but say you have a charge of a brigade 8 squadrons or so or 16 times this lot. Surely all that's possible is to form them up the ride out to the front saying follow me. Once they are going in generally the right direction discreetly slip to the back of the line. That would be my aim anyway.
Posted by johnpreece at 02:16

Nice horses, John, very realistic, how did you paint them?

So does this comments lark work then?!

For cavalry, I go with the principle of the darker colour the horse, the "heavier" the unit. So Cuirassiers get all blacks, Hussars a mix of light tans/ bays, etc. Easy for table identification purposes for those not familiar with the perod being played.

A rousing (and slightly terrifying) vision. Easy to see why some bodies of troops gave way at the sight of an approaching body of cavalry like these fellows.

John -- see http://tinyurl.com/2oazmn for a hstorical piece on horse colouring.

...I'm not a gambler, but I like to visit the horse racing every now and then just to stand by the finish post when ten or so horses go past at full pace - the ground literally shakes.... not difficult to imagine how frightening it must have been to be standing on two feet with nothing but a bayonet between you and the guy on the horse!

Excellent post. It reminds me of that tv programme with Peter Snow and his son - they stood about 1,000m away from a troop of cavalry and described their feelings as the troop charged straight at them. "Bloody terrifying" I think was their reaction.

It is no wonder that major police forces around the world use mounted troops for crowd control.